An elevator operator named Jorge doesn’t know he’s dead. A passive aggressive ghost defends his territory at the corner of Division and Western. A mysterious pattern of redlined maps chokes the city into decades-long segregation. In 100 Hauntings, created by an intergenerational ensemble of performers, comedians, writers and community organizers, Free Street asks: Who—and what— is haunting Chicago? To create the performance, the ensemble facilitated over a dozen story circles in communities ranging from Englewood to Humboldt Park, asking hundreds of Chicagoans to share their personal experiences with the notion of hauntings, both literal and metaphorical. 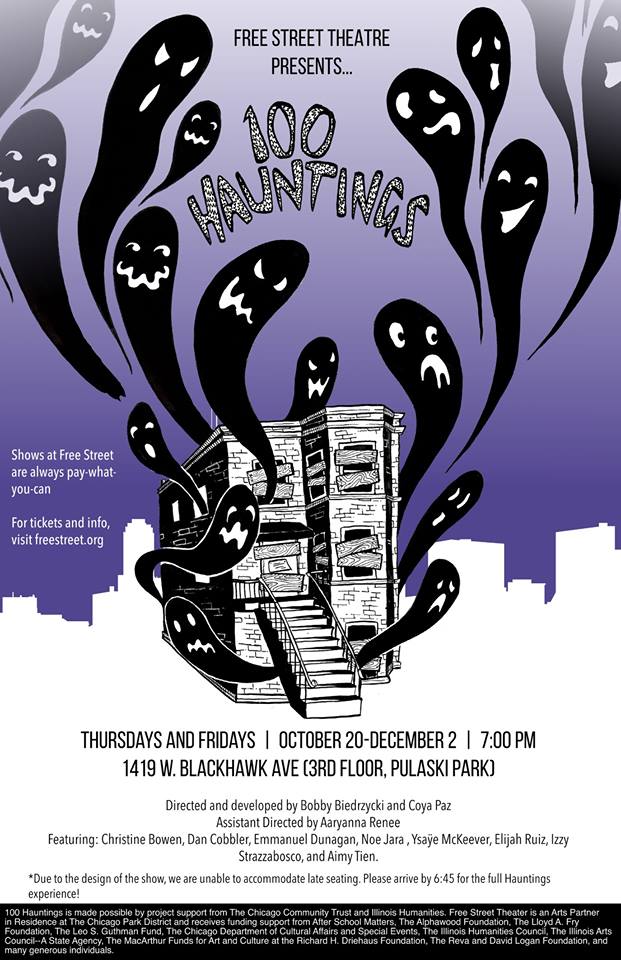 “We wanted to avoid the ‘famous’ ghosts, the kind of ghost everyone knows is an urban legend. We were interested in ordinary ghosts, the kind that haunt your laundry room. It was important to us to take these hauntings seriously, to ask what the appearance of a ghost can tell us about the forgotten histories of our city.” – Coya Paz

100 Hauntings Co-Director Bobby Biedrzycki adds: “Any ghost story is an investigation of sorts. It asks us to explore both the familiar and the unknown in an effort to better understand ourselves and our world. That kind of exploration requires us to be brave as listeners, to lean in, and it often compels us to add to the conversation by sharing one of our own ghostly experiences.”

Fresh off of a “campfire style” tour in public parks this summer, 100 Hauntings moves inside for a longer, multimedia performance just in time for Halloween. 100 Hauntings will run October 20-December 2 (No shows November 24 or 25), Thursdays and Fridays at 7pm at 1419 W. Blackhawk Ave, 3rd Floor (Pulaski Park Fieldhouse). Shows at Free Street are always pay-what-you-can. Tickets at www.freestreet.org. Co-programming for ages 3-12 will be available on October 28, November 18, and December 2.

On streets and on stages since 1969, Free Street Theater is dedicated to producing new performance created by, for, with, about, and in Chicago’s diverse communities.