Did you know that about half of LGBTQ people identify as bisexual? If you’re a believer in the Kinsey scale, most people fall ‘somewhere in the middle,’ as it were. Despite their large numerbs, bi+* people are largely invisible, rarely having their needs specifically addressed, and face disproportiate rates of violence and negative health outcomes compared to monosexual (i.e. straight, lesbian, gay) people.

One way bi + communities address this invisibility and disparity is with Bi Awareness Week (#BiWeek), which takes place this year on September 19 through 26. The week culminates on Bi Visibility Day, which is today, September 23.

Overall, bi+ people have poorer health and face more partner abuse than straight and gay people. An important cause to note is the intersection of biphobia with racism, sexism and transphobia. Forty-percent of LGBT people of color and about 50% of trans people of color identify as bisexual. Compared to straight and gay people, bi+ people face higher rates of cancer, heart disease, drug and alcohol abuse, and lower levels of social support and feelings of well-being, starting from adolescence. Much of the health disparities are due to lack of preventative care, which can be due to low income, a lack of healthcare access and not feeling safe to disclose one’s sexual identity with healthcare providers. Healthcare providers are overall grossly inequipped to properly and respectfully treat LGBTQIA people overall.

Bisexuality is erased, delegitimized and misunderstood

Fewer bi+ than gay/lesbian people are out to their friends, families and colleagues. While homophobia treats being gay as deviant and wrong, bisexuality is more often erased and delegitimized. Even in the more woke queer communities, there can be a chasm between monosexual and bisexual people, with many of the former buying into bi stereotypes and feeling that bi people, because they have the potentiality to be in straight-passing relationships, have “bi privilege” and aren’t really queer. A common experience is being asked to “prove” one’s queerness by cataloging one’s romantic or sexual experiences and attractions to determine if a bi+ identity is legitimate—never mind that straight and gay people are often allowed to prove they are gay/straight by simply saying they are. 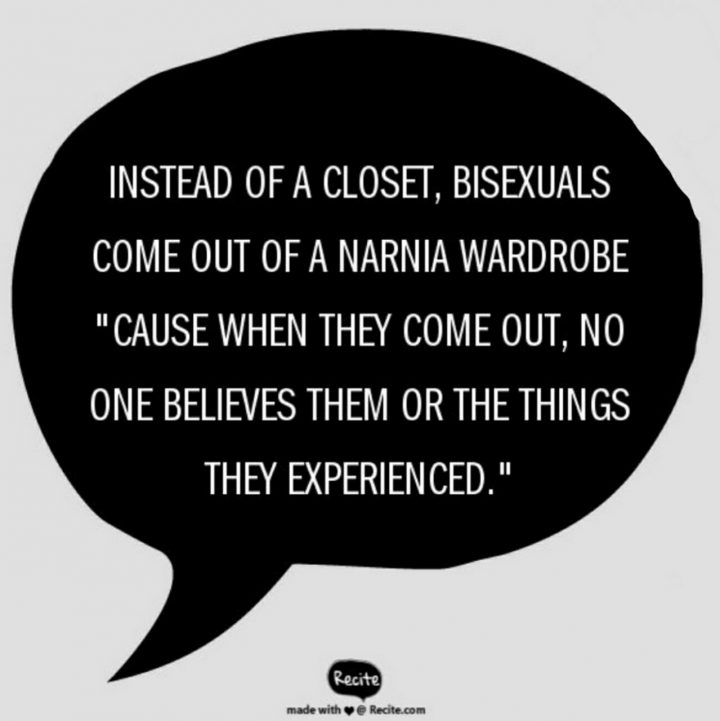 When bisexuality was first described in academia, it was considered to be an “immature” form of sexuality that would eventually “mature” into gay or straight; this mentality persists despite the mountain of evidence and testimony that bisexuality can be just as permanent or fluid as monosexuality (straight, gay) and that, in fact, most LGBTQ people are bi+ than monosexual. Within queer communities, there some also hold the assumption that the bisexual identities are backwards, upholding the gender binary or are cissexist by implying there are only two genders (“bi”).  While there are certainly some bi+ folks who are transphobic and prejudiced against nonbinary folks, the ‘bi’ in bisexuality actually means “two or more genders similar or different than one’s own.” In fact, historically, there has been a lot of work done together by bisexual and trans people, who are both marginalized from cis and monosexual people.

The ‘B’ in LGBT and in the media

Though the B is included in the acronym, bisexuality is systemically erased, from organizations that work towards LGBT rights and liberation down to intimate relationships. Compared to monosexual gay & and lesbian organizations, there are far fewer bi+ organizations and bringing up of bi-specific issues are often deemed not important enough to discuss separately from gay issues, similar to how trans issues are treated.

In straight and gay communities alike, bi+ folks are often stereotyped as promiscuous, greedy, untrustworthy people who can’t make up their mind or are going through a phase. And like with homophobia and gender- or race-based violence, biphobic harassment and violence against bi people can be directly due to their specific identity and the stereotypes associated with it. A recent example is how Amber Heard was treated in the media after filing divorce due to Johnny Depp abusing her, in which tabloids referred to her “lesbian past” and the likelihood that she cheated and was out for money because she’s bi. And when bisexuals are not being framed in these negative ways, they are being erased; take, for instance, openly bisexual Freddie Mercury and Alan Cumming always being considered to be gay icons, and David Bowie and Lin-Manuel Miranda being thought of as straight despite all of these men being openly bisexual.

Fictional media follows suit, with bi+ characters  being portrayed in offensive, stereotypical ways, but more often, their bisexuality being erased, usually by portraying them as ‘actually’ gay or straight, or just ‘not liking labels.’ As Eliel Cruz discusses in his video below, media representations of marginalized groups are important because “our media influences how we see various communities” and how we treat people. #RepresentationMatters

Why we need more visibility and support for bi+ people

Despite being a large proportion of LGBTQ communities, bi+ people are largely invisible and face more violence, worse health, lack of support, and being misunderstood and stereotyped in comparison to monosexual people, whether gay, lesbian or straight.

Public awareness campaigns can play a valuable role for giving bi+ people more visibility and support, and to help shed some of the ignorance that can lead to negative outcomes for bi people. However, it is also important to see visibility and awareness as a first step towards inclusion and liberation.

Awareness and visibility are crucial if we are going to address stereotyping, health and safety disparities and erasure, but are limited in their power to actually affect change and help marginalized people against overwhelming forces of oppression, erasure, violence, hetropatriarchy, sexism, homophobia, biphobia, transphobia, racism, capitalism, colonization, the prison-industrial complex…well you get it. Visibility is afforded more to people who already have a degree of privilege, as well, and not everyone can afford to be visible, for their own safety and well-being. There is a lot of work for monosexual allies and healthcare and direct service providers to do in order to support bi+ folks without forcing them to assimilate or compromise their identities and bodies. Check out these links in the next section for some bi+ resources and info for allies.

Resources and info for bi+ folks and allies

10 ways to help your bisexual friends fight invisibility and erasure

* I use “bi+” to mean people who identify specifically as bisexual, but also people who fall under the so-called “bi umbrella,” pictured above.