ElevArte Community Studio, a social impact arts organization, will host its 11th Annual We Are Hip-Hop Youth Festival on Saturday, August 6th at Dvorak Park in Pilsen. The only event of its kind, completely organized by Chicago youth, strives for peace and hip-hop awareness while celebrating the powerful movement of resilience.

“Our team has been working hard on this event and I know the festival is going to turn out great. We want to share the positive aspects of Hip Hop through this unique festival with the entire community, especially young people.” –  Jennifer Villanueva 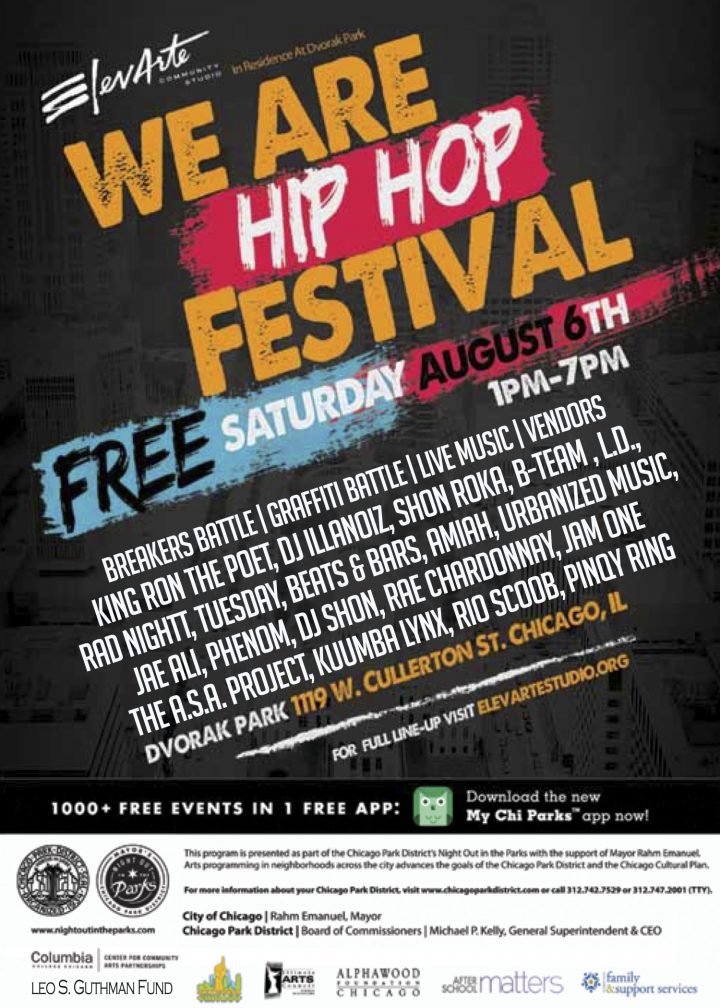 The We Are Hip-Hop Youth Festival explores hip-hop in its various forms: MC’s, Graffiti, DJ’s, and Breakdancing. The festival includes live entertainment, graffiti and breakdancing battles, as well as an array of local vendors, including small businesses and local food. This event is FREE and open to the public.

“It is important to give young people the space to create their own event, where they can see their ideas and voices come to life. When youth are equipped with the right leadership tools the results can be astounding. The We Are Hip-Hop Youth Festival is an excellent example of this,” says ElevArte’s Executive Director, Maria León.

Since 2005, ElevArte has supported, empowered and employed over 250 at-promise youth and welcomed more than 3,000 attendees to the annual festival. The festival is used as a tool to teach young people essential skills such as: leadership, team and community building.

The We Are Hip-Hop Festival is presented as part of the Chicago Park District’s Night Out in the Parks series, supported by Mayor Rahm Emanuel. Arts programming in neighborhoods across the city advances the goals of the Chicago Park District and the Chicago Cultural Plan. Now in its fourth year, the 2016 Night Out in the Parks series will host over 1,000 cultural events and programs at more than 250 neighborhood parks throughout the city, making community parks a safe haven and hubs of activity. Projects will vary from traditional performances and concerts, to movies, peace rallies, community workshops, nature based programs, dance pieces, festivals, and more. The Chicago Park District has partnered with more than 120 arts and community organizations to expand and produce this successful initiative. Other funders include: One Summer Chicago, After School Matters and Department of Family and Support Services.