Day 3 confirmed what we’ve been covering over the last couple of days at the festival. Unexpectedness mixed with Old Faithfuls combined for another electrifying day at Grant Park. One of the former was Secret Weapons covering Fleetwood Mac over on the BMI Stage with a nice rendition of The Chain. 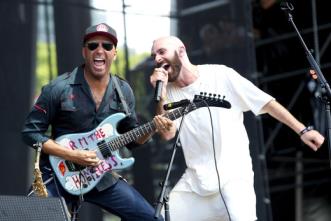 As we stated on our Facebook early in the day yesterday, when Libertyville’s finest, Tom Morello shows up to shred a surprise solo or two, you drop what you’re doing and take notice. He did just that on the Samsung stage to start the day off right.

Big Grams took the heat head on for a sunny, energetic set, and Big Boi came through with the quote of the festival as they exited the stage from an impressive performance: “Appreciate those titties.” Singer Sarah Barthel first initiated the request, stating that she has seen a lot of things at Lollapalooza over the years, but one thing she needs and hasn’t seen and is hoping to make happen here this year, “I need some god damn titties.” 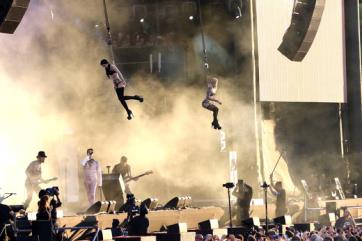 Perry Farrell, who doesn’t need to prove anything to ANYONE, showed that he’s still got it with Jane’s Addiction. They threw down a timeless set for all the fans who have been coming to Lollapalooza and celebrating every year

Grimes on the Lakeshore stage snatched Best Set of the Festival honors thus far with her punk-metal-dance-pop-core-loveliness. There just aren’t enough adjectives and superlatives to do the set justice, so I’ll just say this: SEE GRIMES NEXT TIME SHE’S IN TOWN. 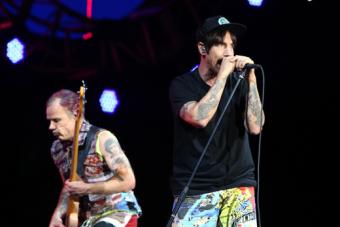 Red Hot Chili Peppers: good when we were kids, teenagers, and now adults, and if you’re just tuning into their storied career, you’d have no idea what of their age. We’ll have what they’re having, am I right?!? Seriously, how does Anthony Kiedis age so well? Anthony and Flea still have the energy of twenty somethings. Can’t Stop, Dani California, Dark Necessities, Snow (Hey), Go Robot, Californication, Under the Bridge, By the Way, the list of hits goes on and on like an Erykah Badu track..