Following the successful release of his first EP, The Blue Lion, Lester Rey is set to debut a new single titled, “One Love.” He performs with the Blue Lion Sound System and featured guests NuBambu and Calixta on Saturday, May 21 at Martyrs’. 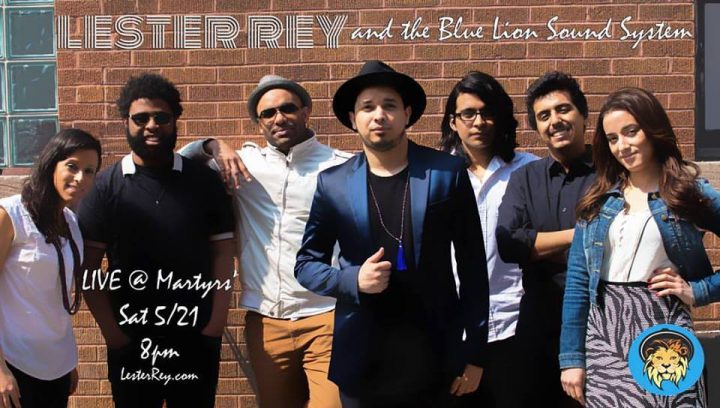 It’s tough to be an artist in a metropolis like Chicago where talent overflows from almost every corner of the city. On the other hand, it’s fantastic to be an art enthusiast because you can indulge in and enjoy a vast array of events, in numerous art froms, almost on a daily basis. Although audiences exist, it takes more than just putting yourself out there once in awhile. Success is achieved through hard work, dedication and a lot of hustle (with a little sprinkle of luck or karma) for up and coming artists to get their passion(s) to as many eyes, ears and souls as possible.

With that in mind, we spoke briefly with Chicago artist Lester Rey who vocalizes an affinity for poetic lyrics and has beautifully extended his love of Latin music by fusing Caribbean and Latin rhythms with elements of soul, R&B and hip-hop which result in mini-hybrids of sounds apt for alternative music lovers and those that like to sway on the dancefloor.

Why did you decide to release One Love and what is it about?
I’ve had this song for quite some time. I wrote it when I was in love many years but packed it away. I knew I wanted the music to convey excitement especially since I had recently gotten divorced and a lot of the music I was writing at the time was darker. I knew I wanted a merengue feel to push that vibe further. Growing up on tropical music and playing it in church back in the days, I knew that I wanted to return to those feels eventually. I was going to release it on the Boogaloo EP I released in January but it didn’t fit the mood yet. I’ve been waiting for this summer to release it.

Who is involved in its production?
I came across DJ Maahez before he was signed and I loved his jams on Soundcloud. He is predominately a Moombahton DJ. I was part of a Reggaeton Duo called RtumbA for a good year and we were gonna record to a DJ Maahez beat, but school got in the way of my music career at that time and the song was put on hold again. Eventually last year I got back into the track that DJ Maahez made and finished it. The producer mixed merengue with moombahton and is based in Miami. He is currently signed to Universal and is supported by DJ Snake.

The vocals were engineered by Ben Antunez (Chicago/Mexico); it was produced by Maahez (Miami/Cuba) and I myself am of Puerto Rican descent. That’s why near the end of the song I give a shout out to Puerto Rico, Mexico, Cuba, Miami, y Chicago.

You mention this darker place you were in because of your divorce. Mind telling me more?
I was married when I was 19 because the girl was pregnant. Being religious at the time and having religious parents, we were easily convinced into a marriage in order to be “right” before God. At about 22 years old I found out the child wasn’t mine because of a hunch my dad had. Eventually I got divorced, which was a long process. I was officially divorced by 25. I learned a lot from the process, the economic struggle, the deceit, and about my strengths.

That story is reflected in the story line of One Love because it came after a divorce during a period when I didn’t believe in romance or love. When I got out there again I regained that faith in love and wanted to write a positive song that conveyed excitement, emotion and was also fun to dance to. 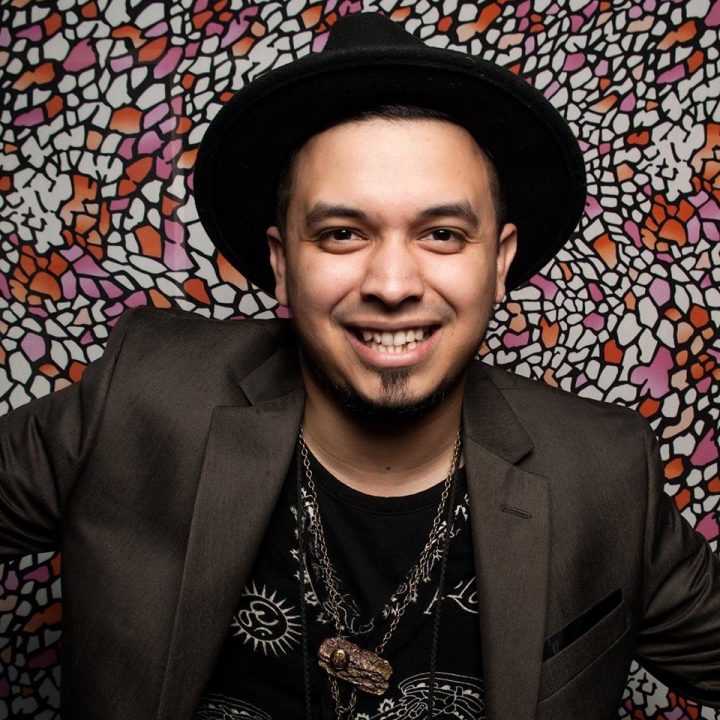 On a personal note from this writer, it was refreshing (and super impressive) to meet Lester Rey for the first time as he introduced himself at a random event and explained his music, his goals and his search for more like-minded musicians. No one has ever done that, ever! I was like, woah. And, well, he’s been on a roll ever since.

Do yourself a favor and head out to Martyrs’ this Saturday, May 21st and enjoy a full night of Latin gems from some of Chicago’s most talented players including Lester Rey and the Blue Lion Sound System, Nu Bambu and Calixta. Tickets available here. (Plus, they mentioned #dembow and y’all knooooow how much I love dembow. “Si tu quiere dem-bow-o-o-o-ooo” Ah! Happy happy joy joy!) 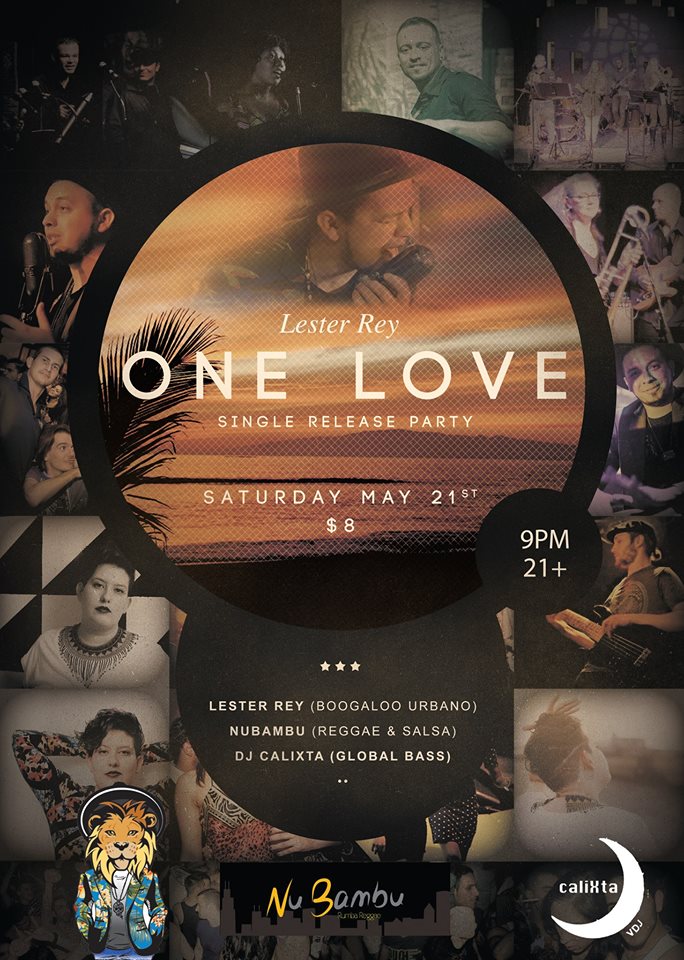 More about the event:

Picking up where Boogaloo left off, Boogaloo Urbano is a genre that continues to fuse American R&B and Soul with Latin Rhythms such as Cha Cha Cha, Son, and Rumba, but also adds elements of Hip Hop, Reggaeton, and Neo-Soul. The pioneer of the genre is Chicago raised Boricua Lester Rey and joining him on stage are the Leones, a blend of Funk, Latin, and Electronic musicians. Together they blend classic Chicago sounds like Blues with traditional Puerto Rican music, such as Bomba to bring an exciting never before heard presentation of Boogaloo Urbano. While Urbano provides the Hip Hop voice of the community Lester Rey grew up in, the Boogaloo sets the stage for the dance and rhythms of Caribbean Diasporas. Inspired by his father’s funk and rock records along with his mother’s love of salsa music, Lester Rey is fusing black and brown sounds to put Chicago music on the map and unite communities on the dance floor. 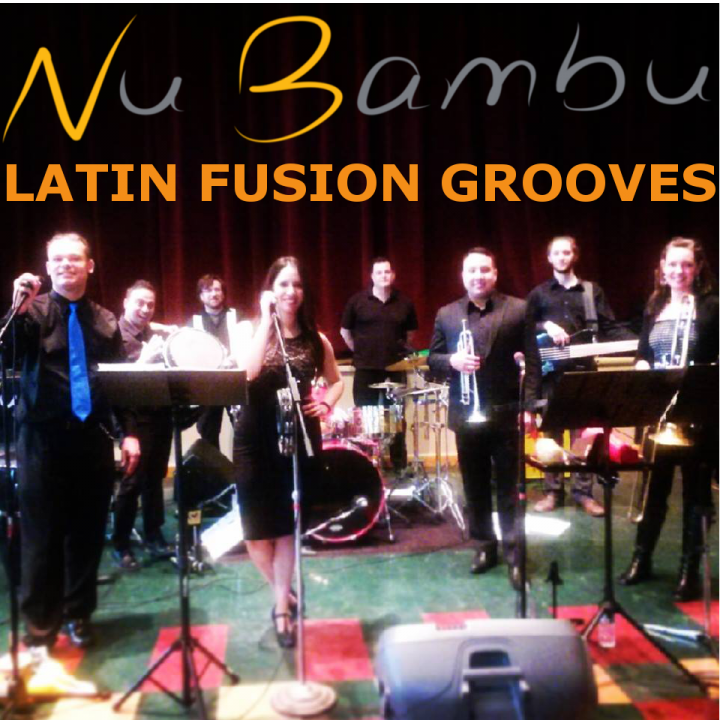 The members of NuBambu are all seasoned musicians from the Chicago Salsa and Reggae scene. Dissatisfied with the constraints of their respective musical genres, these eight musicians have combined elements of Reggae and Salsa to create an original sound. The instrumentation consists of piano, congas and horns essential to Latin sounds as well as the drums & bass that are essential to the sound of Reggae. The band also includes two vocalists who strongly represent both musical traditions.Aside from being seasoned musicians, NuBambu is enriched by their cultural and ethnic DNA. While all band members reside in the United States, they come from various cultural backgrounds spanning all corners of the globe. The end result is a seamless blend of Reggae and Latin rhythms that create a unique musical experience.With their multilingual conscious lyrics and stage presence, NuBambu easily engage audiences from all walks of life and creates a fascinating sound combining two traditional styles. Every song showcases the best of both world with distinctive beats and rhythms that electrify audiences eager for original music. NuBambu’s musicianship and wide range of cultural influences fuse together into an original Chi-town sound. Listeners can hear the influences of Reggae, Salsa, Cumbia and Merengue in songs that they have created.At a time when there is a growing interest in contemporary and traditional musical fusions, NuBambu creates music in a style that is forward thinking without losing sight of where the music has come from.Primo Cruz: Vocals -Jason Matula: Bass -Pete Zubinski: Piano, Keyboards -Carlos Aquino: Trumpet -Rob Almaraz: Drums -Ana Santos: Vocals -Pete Maestro Vale: Congas -Carol Macpherson: Trombone 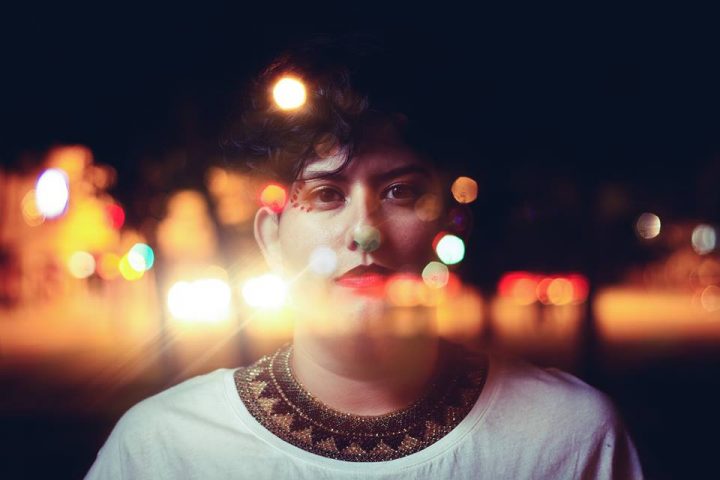 caliXta DJs and VJs as an independent freelancer and as part of Chicago’s CumbiaSazo crew. Since 2012, caliXta has been working on learning and honing her craft and continuing with her vision of creating dancefloors that are respectful and healing. Although originally from Chicago, a lot of her formation and scheming around liberation and revolutionary partying started in DC from kickbacks with friends and Maracuyeah and Anthology of Booty queer femme parties. When she moved back to Chicago in 2011, she felt like similar soul-elevating spaces weren’t common in Chicago, and was having a hard time finding spaces to hear some kinds of music she thought were so beautiful and enriching. She helped co-found dále shine with several friends to spin and create a scene for a wide variety of digital Latinx music in Chicago. In 2013, she joined the CumbiaSazo crew and found kindred spirits with which she could continue working toward the goal of creating new and communal spaces through art and music. She has been fortunate to be able to work with many talented artists, collectives, parties and organizations along her journey as an artist, who continue to shape her visions and dreams.

Join us for a night of good vibes, high energy, and great music that pushes the envelope beyond traditional. A night of Tropical Bass, Reggae, Global Bass, Salsa, and Boogaloo Urbano. Expect the Dembow!