Cesar Zapata is the chef and owner of the popular Miami restaurant The Federal Food, Drinks & Provisions, as well as the new restaurant Phuc Yea!, which will open in the early months of 2016 and will feature dishes inspired by Vietnamese cuisine. Cesar shared some advice and his favorite Latin American-inspired recipe to prepare us for the Super Bowl this Sunday.

How do you celebrate the Super Bowl?

As a chef, the most important part of my Super Bowl celebrations is the food. The night before, I get all the ingredients: whole pork, crab, lobster, nachos, caviar and, most important, beer. The next morning, I light the caja china (a special oven to cook the pork), begin cutting up the crab and cooking the lobster and put various sauces, nachos and caviar on the table. That way, everything is ready before the game starts.

What do you recommend for giving a Latin flavor to the Super Bowl?

I like to use the caja china to roast the entire pig. Obviously, if you don’t have one, you can cook it in a a more traditional way. I also like my dishes to be bursting with flavor. I always add a bit of Tabasco Chipotle and Tabasco Jalapeño to complement my marinades, which add a touch of Latin flavor.

How can our readers improve typical Super Bowl foods, such as burgers?

I have taken the classic La Frita sandwich, also known as a “Cuban hamburger,” and added my own touch. I use Colombian chorizo, ground beef, thinly sliced potatoes, onions, BBQ sauce and Tabasco Chiptole. For a vegetarian option, I love to make a burger patty out of black beans, which gives a special touch to the menu.

What are some Latin American drinks that you can recommend serving for the Super Bowl?

Some of my favorites are chicha morada, a Peruvian drink made from purple corn, cinnamon and other spices; horchata, a rice-based drink with cinnamon; and, obviously, refajo made with Colombian cola and pilsner beer.

What have you learned about cooking that you didn’t know before opening your restaurant?

The beauty of my job is that I learn something new every day! 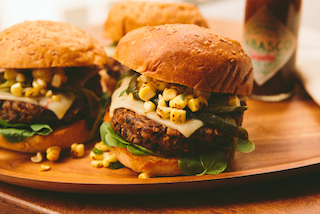 For the black bean burger:

For the huitlacoche (corn smut) preserve:

3/4 cup of pickled huitlacoche
1/4 cup of cooked corn, shucked
1 Tbsp. of chives, in small thin round slices
2 Tbsp. of olive oil, plus some to cook the burgers
Black pepper, to taste
4 brioche or potato buns
8 slices of pepperjack cheese

For the black bean burgers:

Separate 1/2 cup of drained black beans. In a food processor, process the rest of the black beans, mushrooms, shallows, jalapeños, barbacoa salsa, TABASCO® Chipotle Sauce, ancho chile/chili powder (depending on which you use) and cumin, until the mixture is a thick puree. Put the puree in a médium-sized bowl, and mix in the oats, rice, white egg and beans. With this mixture, create medallions that are approximately 1/2 inch thick, cover and refrigerate for 1 hour. Heat up a pan on medium-high; add a bit of olive oil to the pan and cook the medallions until they are crispy.

Heat up the oven to 450°F, or heat up a grill to medium-high heat, or use the stove on high heat. If using the oven, mix the poblano peppers, oil, salt and black pepper in a large bowl; put in a baking pan with edges. For the grill, brush oil and place the poblano pepper mixture directly onto grill. Cook for 15-20 minutes, turning them over every once in a while, until they are tender and cooked through. Place them in a large container, cover with a plastic bag and let them steam for 15 minutes. Peel the peppers, cut them down the middle, discard the seeds and cut into 1/4-inch slices.

For the huitlacoche preserve:

In a bowl, mix all the incredites and season with black pepper. Toast the buns on the grill or in the oven. Put the medallions on the buns and cover with cheese, the cooked rajas and the huitlacoche. Serve with additional barbecue sauce.