If all people lost the ability to remember anything beyond a day, a few hours, or sometimes even a few minutes, what would humanity look like? Without memory, what is the nature of love and relationships, of learning and growing, of pain and trauma?

These are questions that are explored in Claire Carré’s first feature film, Embers, a Chicago International Film Festival entry for new directors and U.S. indies. This dystopian drama takes us to a day about a decade after an epidemic ravaged the world with a disease that eliminates people’s long-term memory. Throughout the film, we encounter five sets of characters in their middle of their daily lives and, like them, we have no idea what happened before.

There is the Guy (as Josh Ritter is so credited) and the Girl (Eva Gocheva) who wake up in a room together and, without even knowing their own or each others names or what happened each day before, feel their loving connection to each other each day. There is a lone child (Silvan Freidman) who relies on the kindness of strangers and, due to their age and inability to communicate through speech, may have been born after disease took over. The child comes across the Teacher, who is attempting to find a cure and used to be a scientist studying neurology (Tucker Smallwood). There is another man credited as “Chaos” (Karl Glusman) who is erratic and violent, breaking things and attacking random people for food or for seemingly no reason.

The only character in the film with a name, Miranda (Greta Fernández), and her father live in a bunker underground and have escaped the epidemic with their memories intact. Though a safe haven, life in the high-tech, cold, gray bunker is structured and prison-like, with daily memory exercises and routines. Beautiful art on the walls, memories of the past and the knowledge that they have escaped a terrible fate are only remnants of an existence that is now gone. They fail to bring real happiness to Miranda and her father, who communcate in both Spanish and English. Seemingly ungrateful for her father’s protection, Miranda longs to leave their bunker and venture outside into the real world to find her mother.

Some scenes progress at such a crawling pace to echo the confusion and disorientation of the characters and others are quick to mimic the immediacy of the moments that come as a surprise.  However, as the film progresses, viewers have a luxury of remembering previous scenes and gain a bit more context and clarity than the characters could ever have. When characters lose each other, we know what and who they had before, though they do not. When horrific sexual trauma is inflicted upon the Chaos character, we see him cry uncontrollably for a few minutes before he suddenly forgets what happened when he sees a random person to harass and then comes upon a room that he destroys; he does not remember the details of the event that caused his feelings of abjection and pain that make him act out, yet the trauma stays with him nonetheless. The Teacher creates rope paths and reminders for himself in an effort to achieve normality and come closer to finding a cure. There are remnants and reminders of what has occured—such as as embers from a fire from last night or feelings of love or of pain—even if the memories themselves are not there.

Embers is receiving mixed reviews, with many reviewers focusing on the slow pace of the film. Though I was admittedly concerned with this in the first scene, which is rather long, I came to see that the film really could not have been done another other than with patience and detail. Though this film takes place in the future and shows incidental bits of sci-fi technology it does not aim to be the kind of action-packed, sexy sci-fi movie that awes its audience with special effects. As a lover of sci-fi and dystopia I enjoyed Embers because not only was it very well-acted by a diverse cast and beautifully shot in an organic yet solemnly blue-gray color scheme, it also has so much to say about the perserverence and loss of humanity in a future of widespread peril and change—the kind of themes that all good sci-fi and dystopias aim to have. At the end of the film there may be more questions than answers about what really happened or what will happen, but the answers to those questions don’t matter as much as what happens today. 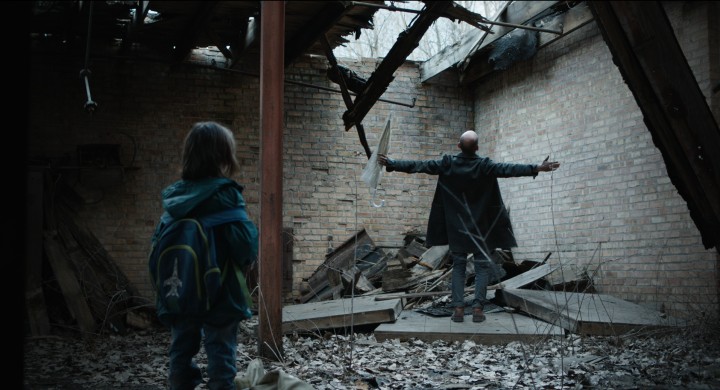 The Chicago International Film Festival runs through Thursday, October 29, at AMC River East, with the last of the ‘best of’ films re-screening on Thursday. Visit the CIFF website for more information.