We felt an almost surreal wave of nervous excitement as we made our way to the first day of Ruido Fest. The highly anticipated and much sought-after music event that seemed to have taken Chicago years in the making was now a reality thanks to the efforts of Eduardo Calvillo (Rock Sin Anestesia, 88.7FM), Riot Fest and a few others who were brave enough to take the chance on making this happen. The world was about to see what Chicago was truly made of: passion, determination and the hard work ethics to make it all possible.

Chicago weather was in on the festive feeling as attendees began to gather shortly before gates opened on Friday at 3:00 p.m. Nearing the press area, we felt Chicago pride upon seeing local band Hurakan already on stage and ready to share the healing energy of their poetic music. Their new album, “El Ciclo De La Vida,” offers a glimpse into a cultural duality that creatively merges the past with the future, in both Nahuatl and Spanish.

Once inside the area assigned for press, we were happy to see that where there is usually chaos, there was instead that same sense of excitement and anticipation. Although fellow correspondents, especially photographers, were rushing from stage to stage and back to the press area, there was a great sense of overall calm and happiness. The professionalism demonstrated by everyone from the staff to the organizers – shout out to Elena Rodrigo and Jeanette! – was key to keeping things running smoothly.

After brief introductions and getting things ready we rushed over to the Demon Stage to check out the opening set by María y José who was just getting started. From Tijuana, he let the audience know that he had learned English – the night before – just for the festival and had taken lessons using “Ingles Sin Barreras” to which we all laughed and encouraged him on. We then heard him tell himself, “Shut up, Tony!” as he got his next ruidosón track ready for the hyped up crowd who seemed to know most of the songs he sang throughout his set. He also donned a luchador mask at some point, both forward and backward, as he jumped along to his catchy electronic dance beats. 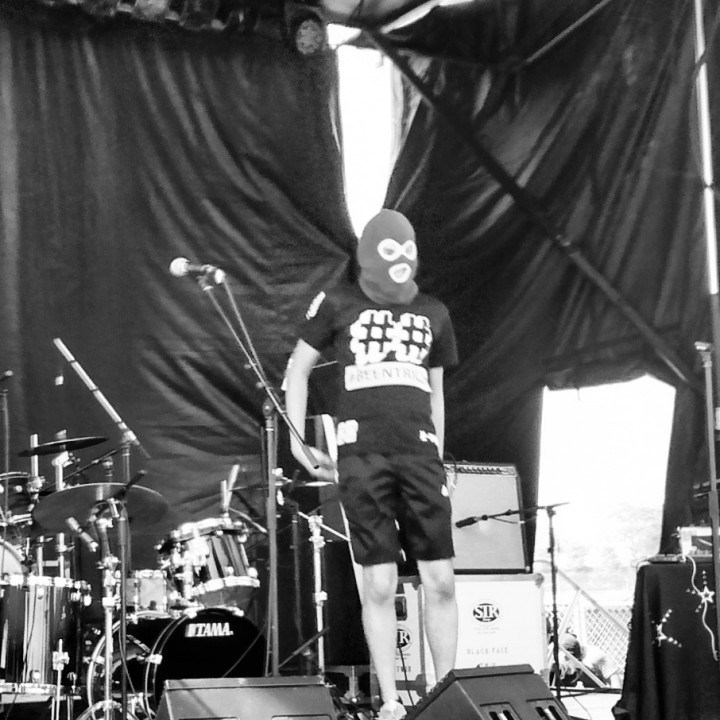 Halfway into their set we rushed over to the Santo Stage to catch some of Ceci Bastida’s performance, another amazing artist from Tijuana. We wonder what they put in the water out there because we can’t seem to get enough of so much talent from that area of the world. Seriously, the abundance of artists – or at least it seems that way – is incredible and we’re grateful we were able to listen to and speak with some of those outstanding artists gracing us with their presence.

Back in the press area, Tony Gallardo aka María y José, informed us why he loved Tijuana so much, why he doesn’t like managers, and, um, a few other things we were all laughing about. Take a listen… 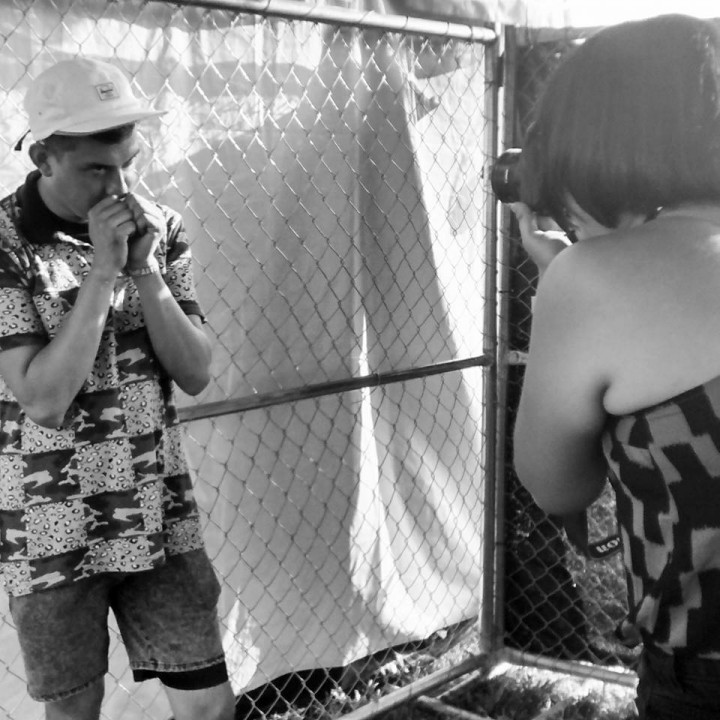 While Carolina went on to take some fashion photos of him, I headed over to who I recognized as Cardiel, an awesome psychedelic dub band from Venezuela who were visiting Chicago for the first time. What struck me most, aside from their killer set later that evening, was how unassuming and nice they were to everyone they came in contact with. There were definitely no “rock star” attitudes around.

Listen to what they wanted to see while they were visiting Chicago and who drummer Samantha is influenced by to get that banging sound on drums.

Shortly after speaking with the rock duo, we had the chance to briefly speak with Ceci Bastida who had just performed. We liked seeing her with a full band as the last time she was in town, performing at Celebrate Clark Street Festival, it was a trio. She explained that she normally plays with a full band like the one at Ruido Fest. Carolina was able to snag some cool photos of Bastida’s outfit while I walked over to the lovely Tejanos known as Master Blaster Sound System. They told us all about their music, made me yell out a grito to prove I’m a Tejana, and explained their fashion choices.

We happened to run into AJ Davila y Terror Amor and he explained he was doing well except for some pain he was feeling from a fall he’d suffered a couple of days before. He even had us feel the bandages around his waist. It’s not the first time we speak with him and he’s always a great sport and always in a great mood ready to talk about music or anything else. We had last seen him at LAMC in New York City a year before so it was beyond cool that he recognized part of our crew. He informed us he’s been living in Mexico City working on new music.

We didn’t want to miss another local band, La Armada, and we’re so happy we didn’t. The energy they project during their set is infectious. No wonder they continue to do what they do. We spoke with them after their set, and let me tell you, those are some of the most genuine musicians I’ve ever spoken with. They are definitely in tune with what’s going on in the world and aren’t afraid to discuss it.

Going and back and forth between stages was a given and it wasn’t as bad as we thought it might be. Ruido Fest was organized in a way that allowed you to catch a bit of everyone’s set, which is a blessing at a festival featuring over 50 bands. 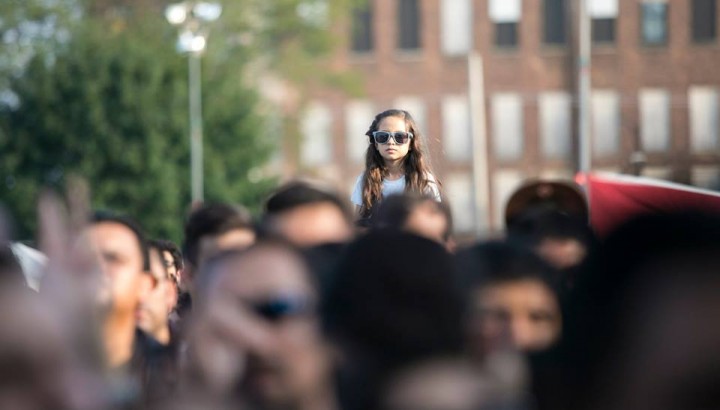 Banda de Turistas knocked it out of the park, followed by a killer set by the sexy electro dream pop musings of Denver. In between we caught Cardiel, who displayed an energy like we’ve never seen before from a duo. And, of course, COMPASS, featuring Mexican Institute of Sound and Toy Selectah, did an amazing job of getting the crowd in dancing mode and prepped for a rockin’ set by Enjambre.

Finally, to end the first day of festivities and with the shine of Chicago’s skyline shining bright in the clear, cool night, Zoe came out with guitars blazing and demonstrating that passion that we first knew them for. You could tell Larregui was in the best of spirits which allowed for an energy of electric happiness to surge around the band as they shared it with their fans. 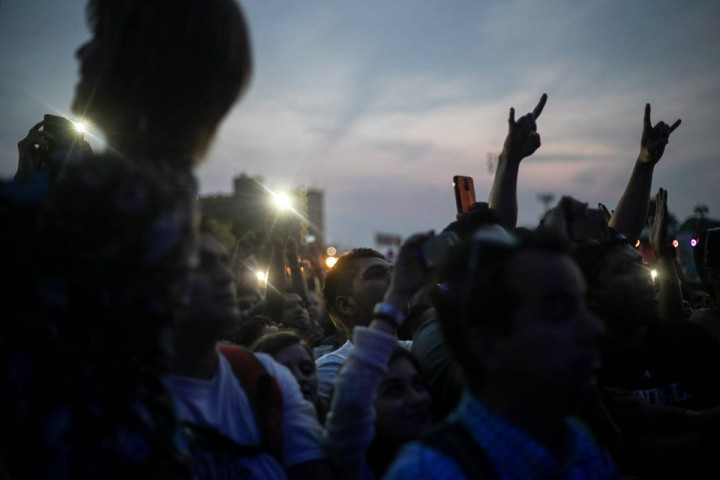 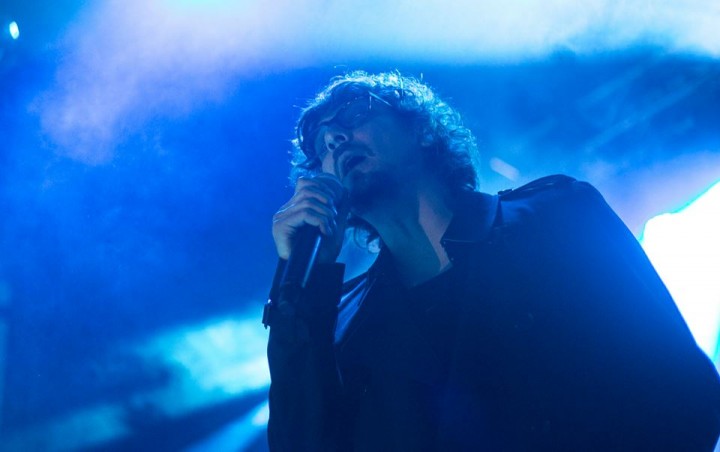 We’ve never left an event on such a high as we did on the first day of Ruido Fest. It was more than we expected and we couldn’t wait to hear and see what else was left of this magnificent musical revolution.

Most photos by Carolina Sanchez