As a writer, I can suffer most things: garbage trucks, airplanes, chatter, music, an open wound on any part of my body (except my hands). But I’ve yet to train myself  to scribble through sinus congestion and the splitting headache that comes with it.

So as buzzing as I was when I left the Victory Gardens Biograph Theatre last week after seeing Raúl Castillo’s Between You, Me, and the Lampshade, unfortunately for everyone, I was forced to wait till at least one of my nostrils opened back up before I could draft my review.

Directed by Teatro Vista’s own Ricardo Gutierrez, the play follows the story of a Mexican girl Amparo (played by Ayssette Muñoz) who seeks refuge in the trailer of a strong South Texas woman named Jesse (Sandra Marquez). Jesse decides to keep the girl hidden from her son Woody (Tommy Rivera-Vega) and a Customs and Border Protection agent named Max (Jim Farruggio) looking for love and mojados. The ensuing scenes are a mix of suspense and Lucy-esque laughs.

Admittedly the story is mostly boilerplate, and so are the characters. Besides the ones already mentioned, there’s the ghost of a formerly enterprising Mexican sweetheart (played by Steve Casillas) and the well-to-do, fish-out-of-water Valley girl (Bryce Gangel). But it isn’t the story itself or the characters that is the alluring bit. The real stars of Lampshade are the dialogue and a pair of brilliant performances.

Sandra Marquez thoroughly embodies Jesse, giving so much life to the character that it’s ultimately her who contributes both the funniest and most heartwrenching moments in the play. She has such a command of tone, gesture and language, able to make an audience laugh or cry at will.

Bryce Gangel is nearly as believable and hilarious as the wacky but well-meaning Kristen — though, to be fair, there isn’t much more written into her character. Still, her comedic timing and delivery are on point. 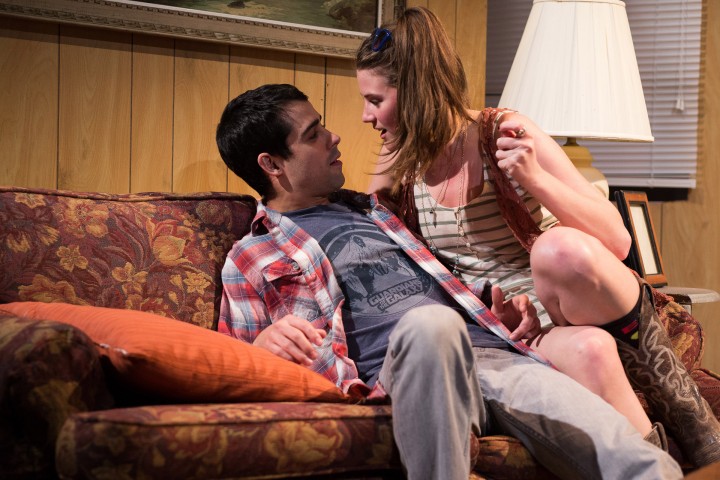 Amparo is the other main character, and while Ayssette Muñoz pours herself into the role, there’s still something two-dimensional about the hapless immigrant who has her Romeo torn from her and is forced to find her own way north to safety. We feel for her, of course, but her story is so clichéd and our reception so prescribed that we end up not forming any kind of substantive connection with her. Unlike Jesse (and even Kristen), everything Amparo does and says won’t surprise the audience, at least not a Latino audience awash with immigrant tales of heartache and hope.

Then again, Lampshade isn’t just for a Latino audience, as Castillo indicated in an interview with Gozamos (appearing next week) and in a Q&A following the show. This story is directed at everyone.

Speaking of wider audiences, what is surprising about Amparo is the way her complete lack of English is negotiated through a bit of dramatic ju-jitsu on the part of the playwright. So as not to reveal too much, I’ll just say that Castillo decides on an simple yet clever way for Amparo to do much of the talking and still be understood by non-Spanish-speaking members of the audience.

The mood of each character — especially those played by masterful actors — permeates the intimate setting of the Richard Christiansen Theatre at the Biograph. The mise en scène is beautifully done, transporting the audience to the dozy town of Zapata (named for a much earlier local hero who also died while leading a rebellion).

If you think Chicago doesn’t have a strong theater scene, that all the good stage actors are in New York, or that there isn’t any place to go to see talented Latino actors doing their thing, Teatro Vista’s presentation of Between You, Me, and the Lampshade at the Victory Gardens Biograph Theatre will disabuse you of all your misconceptions.