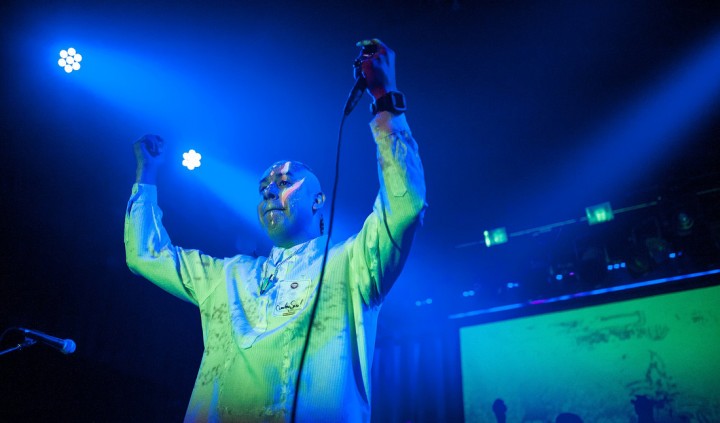 “Olmeca continues his refusal to be restrained within any musical genre or content with his newest single “Run the Joyas”. Coming right out of his most recent full-length album Brown is Beautiful, Olmeca not only borrows a masterful beat from Run the Jewels but matches El-P’s and Killer Mike’s wit and style, flow and cadence, adding his own Spanish flow to construct beautiful musical anarchy. If you thought Run the Jewels was a great collaboration wait to you hear what Olmeca offers in this own rendition!” -Dj Libre

For those who don’t speak Spanish, the song boasts the jacking of the U.S. and Mexican government and giving it back to the people. Word.

David ‘Olmeca’ Barragan is an artist/activist/educator hailing from Los Angeles, California. A son of immigrants, he is one of the few artists who broke ground as an artist and advocate for human rights. His unique writing talent in both English and Spanish is one that Olmeca has brilliantly mastered. In doing so, he has gained the attention of hip-hop and Latin Alternative audiences.  His story and community efforts have earned him the respect from professors, community organizations, and social justice dignitaries like Dolores Huerta, Luis J. Rodriguez, Naomi Klein, and Emery Douglas.

Olmeca’s culture based sound is unique. He mixes traditional Latin American music with today’s music trends. He has toured the U.S. Mexico, Canada, Honduras, and most, Europe. He has shared stages with top name hip-hop artists, and Latin Alternative’s most respected musicians.  He has written music in noted motion pictures, television series, and documentaries.  He has collaborated with Taboo of Black Eyed Peas, Maldita Vecindad, Irene Diaz, Marisoul (Santa Cecilia) and many others.

Olmeca’s unique experiences and upbringing have been an example for motivation and reflection for his audience. Olmeca graduated from CSULA with a degree in philosophy. He is a Latin American Studies graduate. He has been a panelist, facilitator, and keynote speaker at universities, conferences, rallies, and community spaces across the U.S. He speaks on art and activism, culture and identity, immigration and cultural empowerment.

His lyrics are written to encourage critical thinking, transformative education, cultural/political empowerment, and social justice. He has spoken alongside Rage Against the Machine front man, Zack de la Rocha, civil rights activist Dolores Huerta, and educators like Naomi Klein, Antonia Darder, Rodolfo Acuña, and Robert Lovato.  He has organized events throughout the U.S. as well as, bi-national efforts with organizations and indigenous communities from Mexico including delegations to  Zapatista communities.