“What I have always done well is express myself, that’s what fulfills me.

I don’t want to do what everyone says I need to do.” 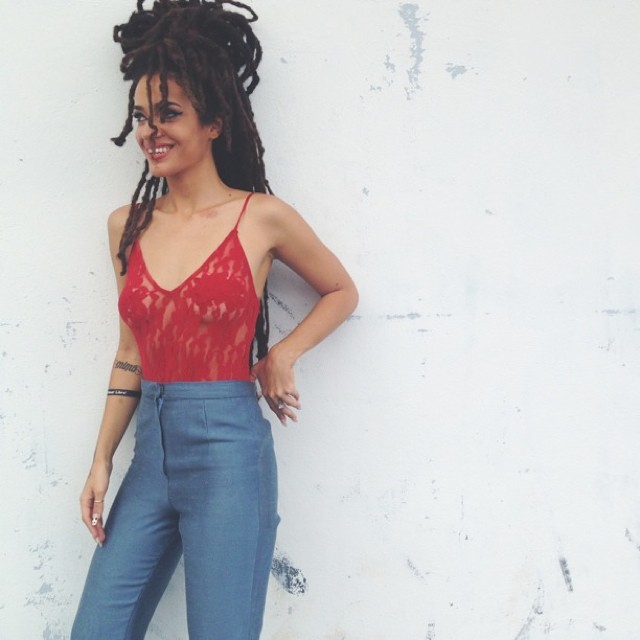 Exuding an aura of gentle calm she seems to glide across the floor like she’s floating on invisible clouds that smell like flowers and earth and evoke all that is beautiful in the world. Calma Carmona is all soul immersing you in a feeling of nam myoho renge kyo. We were first introduced to Carmona’s music in New York where she was one of the featured artists at the LAMC. She declares her strength in sultry layers of sound over complex rhythms of Latin soul. Her new album, Girl on a Bridge, is set for release this winter.

Born in San Juan, Carmona was raised in the nomadic lifestyle of an army family. Extended visits to Germany and the southern states as she grew up enriched her cultural experience, which clearly affect her sound. It’s definitely soul, and she’s definitely Latina. Her voice takes us back to the early days of Anita Baker, Badu, La Lupe and Sade. We’re transported to those times we searched for answers in songs. It was usually when we were in love or our hearts just broken. A lot of her music took us back to standing in front of a mirror mouthing the words, feeling empowered by the sounds and its consequent feelings. These were the songs of strength we needed. There were also songs of seduction and the game of love.

You get all that and more in Carmona’s music. There are doses of hip hop, plenty of R&B and some jazzy cadera shaking tropicalia. Feel the cumbia, the bolero, the son.

Carmona’s career began in Puerto Rico with solo acoustic performances at local cafes. She began performing with other local artists and soon recorded her first EP, There’s No Other Girl (2013). That eventually took her to her first appearances on MTV Iggy, Mun2 as well as the LAMC and would soon get the attention of Beyonce who asked her to open her Puerto Rico performance.

I Got Life is the newest single off her upcoming winter release. Although it’s just been released, we need more of this greatness and can’t wait for the new album to drop.