Screw raking sand. Screw deep, cleansing breaths. Screw a visit to your therapist. Jim Benton’s newest book, “Dog Butts and Love. And Stuff Like That. And Cats.” houses within its pages, cartoon after cartoon, this Louis CK-type of “Men will do anything for boobs…sex” heartwarming truths worthy of being embroidered and framed. Indeed, Benton crafts therapeutic fare that can normalize the most shame-based impulses you may harbor. Yes, yet another human is as wretched as you, but look! They’re funny! And successful! And dogs! And cats. 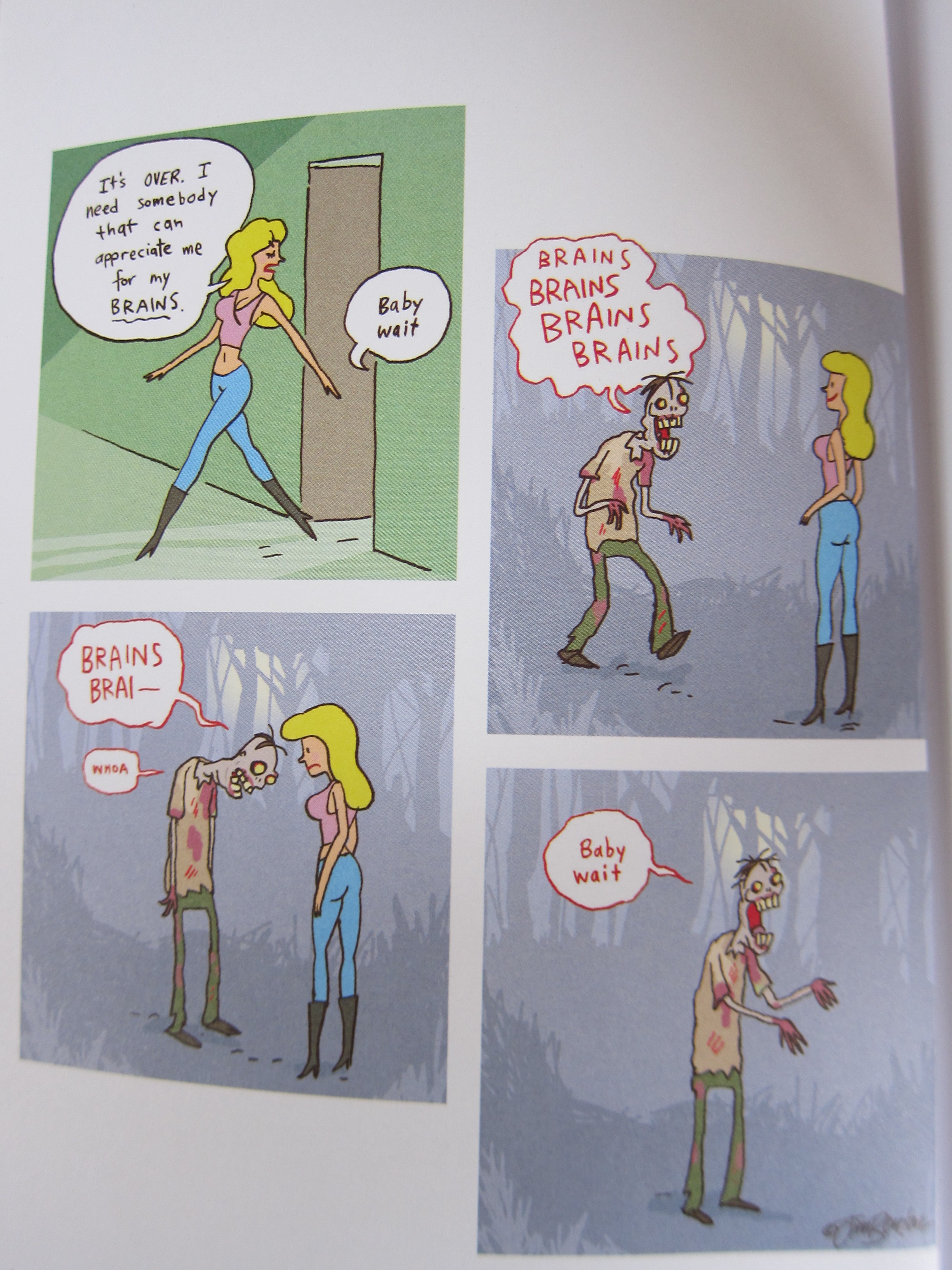 Reading a book of cartoons is not a common occurrence. Can we just say that out loud? And so, in my review of this book, I’m also burdened with overcoming the Hobbesian state this genre of literature finds itself. Consequently, I’m finding myself culling the cerebral trenches a little deeper than what’s typical when I set out to make my case for a book. On this particular day, this looks like not just a walk-through of the book with the intention of getting you all pent up to read the shit out of it but to slyly make a case that traversing the cartoons will also benefit your well-being. Or lower your blood pressure. Or, in that Aristotelian “Poetics” sorta way, bring you catharsis.

Benton begins with a riff that works because of obfuscation and misdirection. A man, outraged, confronts another:

“So we’ve been together how long? THREE YEARS?”

Ah, yes, we’ve all been there. Our significant other douching out on us. Years of familiarity, of intimacy, all insulted from some sort of crass, selfish, insult. Oh, yeah, Jim. Let me fester along with you and laugh once again. But then Benton takes us to an unexpected place, that of parenthood. Oh, Jim, ya got me! Perhaps this collection won’t be as enjoyable as I was anticipating. Parenthood humor can be hilarious, but I don’t want it in a book.

And then it happened. 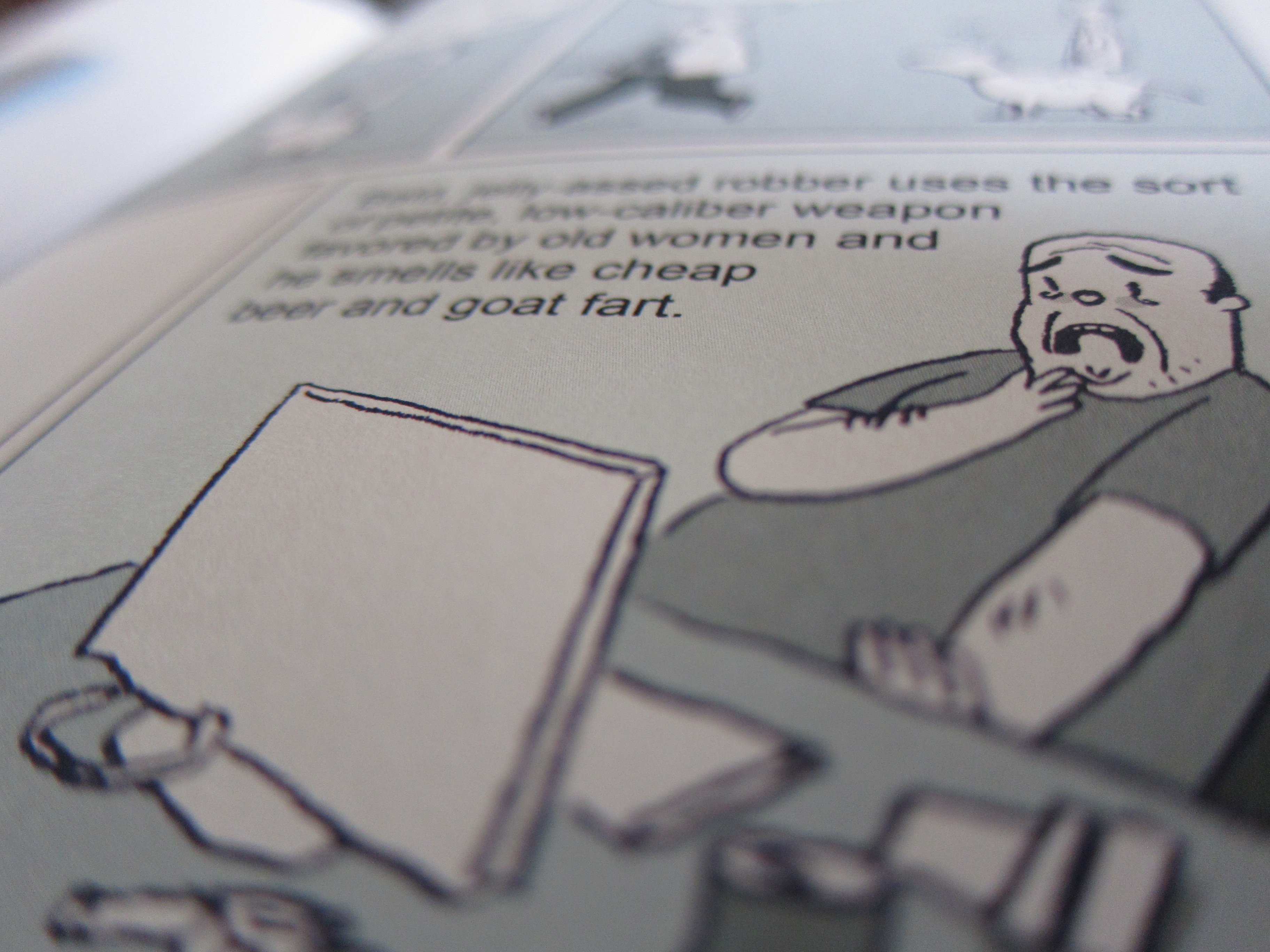 Third joke. Slightly different visual style. Suggestion of violence and outright mention of “cheap beer and goat fart.” Drink it in, I think. Smell it. Get dirty. And laugh and laugh. The collision of my childhood innocence, typified in “cartoon” repurposed in this darker, gritty, powerful “cartoon” that honors the shit-show that is life. Sigh. I’m getting philosophical in a way that makes me want to make fun of myself. I am now quintessential white man attempting to explain away violent rap as poetry. Cue: eye roll and the slightest hint of puke in the mouth.

On the other hand, this might be just what Jim Benton wants. Sometimes life warrants a wide stance; other times, a more philosophical one. Why not combine the two and take a deep, long look at this book? And let’s move from the easier cartoons that curry respect and an amused smile to the cartoons that slap something deep in you and then leave a residue that feels less…safe. 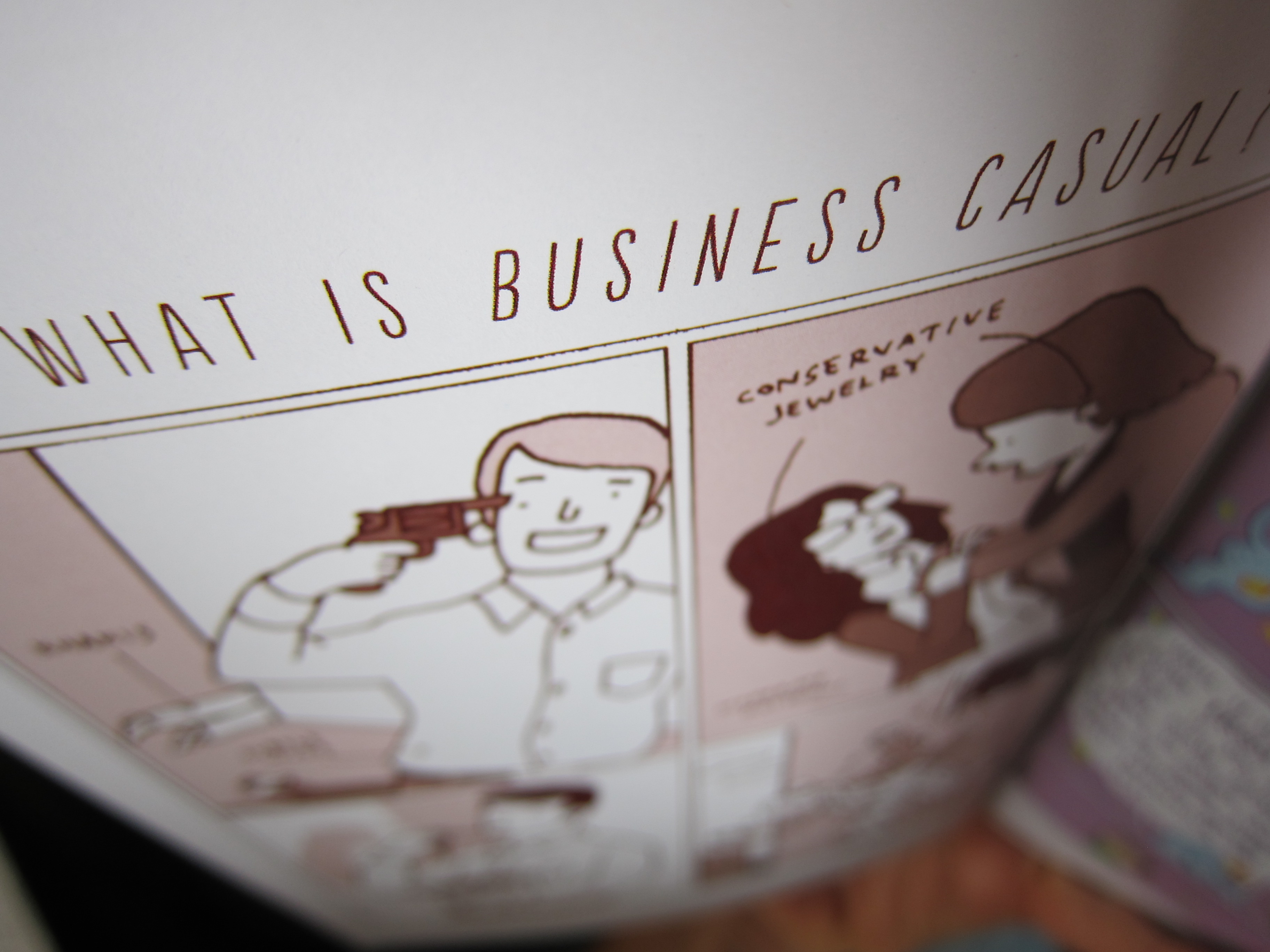 Page 12. “What is business casual?” goes the header. Most of Benton’s cartoons go without a title, but not this one. The color scheme is monochromatic. Violence, “panda fetus,” the trappings of diagrams in the form of arrows – a mimicry of something you’d find in an office environment, occupy the space of these four boxes. You smile, you stare, you think. It arouses in you enough amusement to quickly laugh but then it disturbs. Most importantly, it disturbs you in this creative way. Reminds me of the scene in “Se7ven” when Morgan Freeman’s character says of the killer, “This guy’s methodical, exacting, and worst of all, patient.” Yes, I’m comparing Jim Benton to a serial killer, but the serial killer had completely reasonable cause for disgust! I mean, who doesn’t, in a moment of self-hate at our own sloth, gluttony and lust think, “I’m going to finally purchase that leather sex suit, force feed myself enough Spaghettios to bust my gut and hang all those pine tree air fresheners so I don’t have to clean anymore.” Am I wrong?

A more reasonable method for processing such stress, of course, would be to add Jim’s book to your collection. Seriously, it’s that good. And so, some people kill. Others draw cartoons. The rest of us schleps read them and laugh. Thus is life.

I’m going to go on because I can. And this book warrants some long wind.

Benton’s penchant for complexity in the humor emerges on the very next page. Titled “The Comic Adjuster,” we see another example of Benton’s more thought-provoking range. It involves a blue genie, and so, unfortunately, it’s now freighted with the tragedy that is Robin Williams’ suicide. Admittedly, I’m still quite upset and processing, as I’m sure many of you are. This cartoon, then, enjoys an added depth because of timing. Still, it occupies that place of humor considered on the headier side of the comedy spectrum.

Before things can get too removed, Benton brings us back to a cartoon without words. And it’s good. Head-nodding and a chuckle, I pause and let the simplicity wash over me. As easy as a haiku. The next one adds to the momentum but brings things to a ridiculous and creative place that, again, catches me off guard. It’s here I realize I have low expectations of cartoons. Probably because so many of them are so subtle and never intend anything more than a grin from their audience. Benton is beyond grin and all about something messier. More shart than fart, yeah? 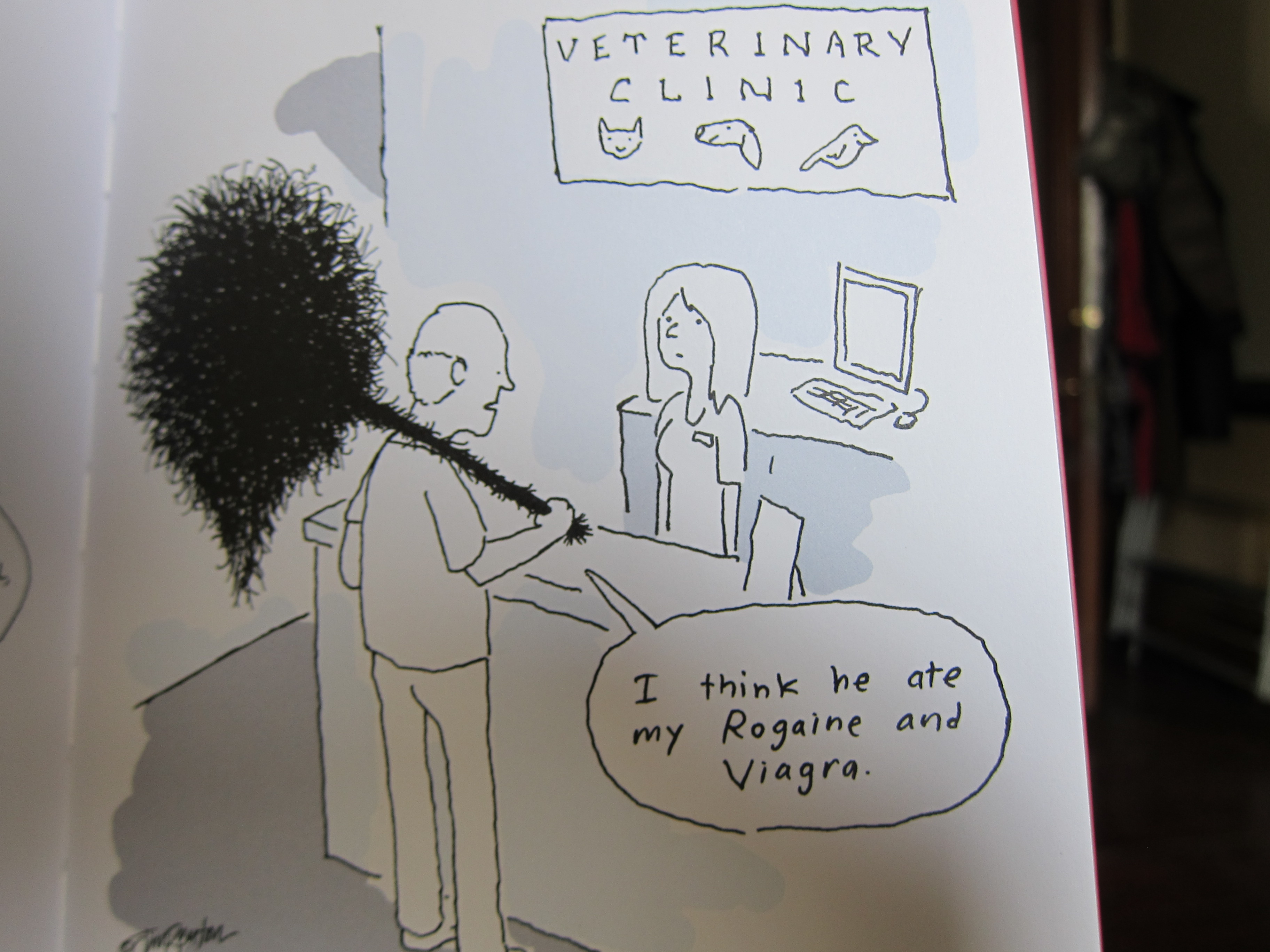 Last month, Pulitzer-Prize winning editorial cartoonist Tony Auth passed away. Auth had worked with Fresh Air host Terry Gross, and in memoriam, she replayed an interview between the two. In the interview, Auth recounts a moment during the Regan years when, in response to one of Auth’s cartoons, the Reagan administration stopped using the phrase, “truly needy.” Of this, Gross remarked, “So that shows that a cartoonist can actually have some influence, which is something I’m sure you’ve doubted, right?” They were both laughing, and Auth managed a couple, “Of course,” affirmations.

This exchange reminded me of both the range and the power of cartoons, and even of laughter itself. While Benton’s preferred diet is less political, the power he wields warrants attention. Laughter heals but it also can get you to think. And when that can involve a fart joke, isn’t that just grand?

Order any of Benton’s books from his site now through Christmas, and he’ll “doodle whatever you ask for right in the book.” Seriously. Click here to get your Benton doodle on. For further Benton creeping, there’s here, here and here. And then there’s always freakin’ Reddit. 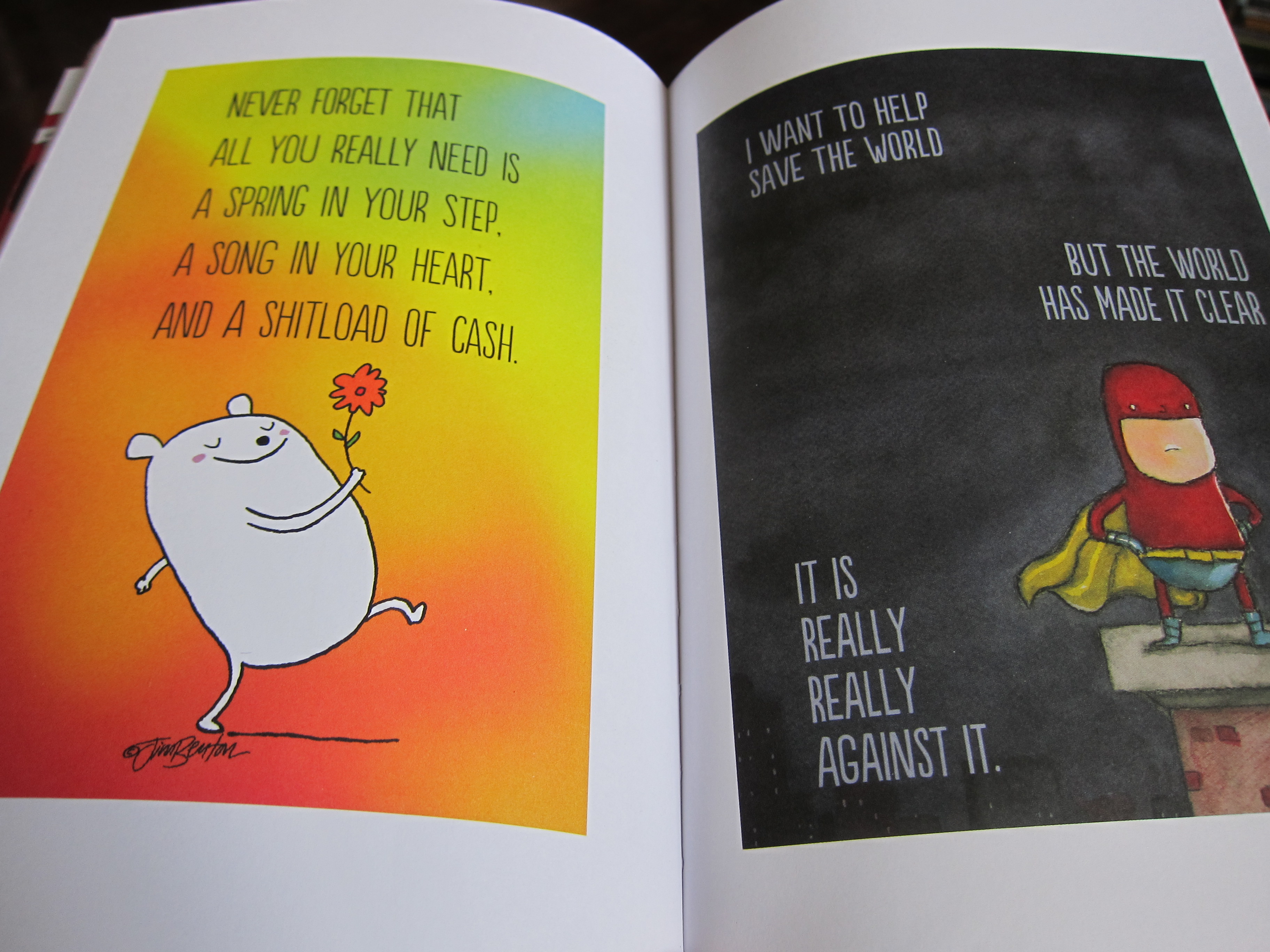