“We played some sones, and people were astonished, they made a circle, everybody was dancing, people were asking us, “What is the name of your band? Where do you play? Do you have cards? We didn’t have any answers!,” says Juan Díes, one of the founders of Sones de México Ensemble Chicago. 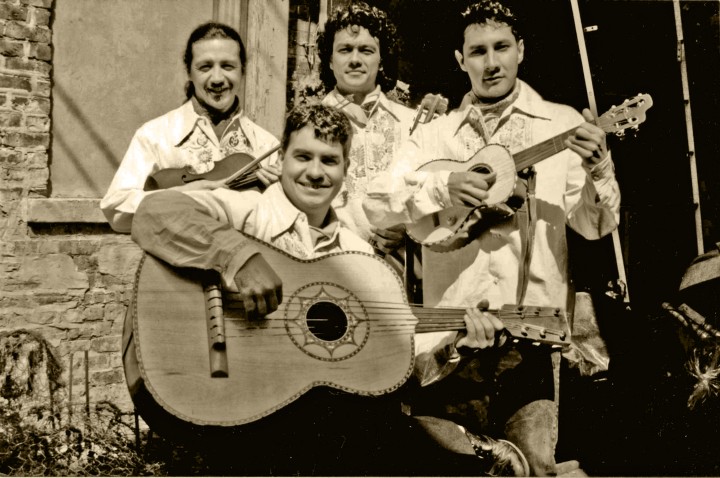 Dies is explaining the origins in 1994 of the beloved Chicago group, twice nominated to the GRAMMY™.  In April of that year, he had a concert as a soloist and he had invited friends and colleagues Victor Pichardo and René Cardoza to join him. Shortly after the success of this event, Pichardo came up with the group’s name of “Sones de México Ensemble Chicago”.

Sones de México is now celebrating its twentieth anniversary, and Díes says they have learned to rejoice in times of success and overcome other periods marked by difficulty, “We have learned that the life of a group has its ups and downs. There have been moments of great creativity and great popularity, great friendships amongst the members. There’s also been times of greater discord, when people have left the group, times when no one calls us for concerts. It’s a road that has its ups and downs.”

Collaborations have always driven new and exciting eras for the band. Says Díes, “One of the things that have made us most creative are real challenges that we have faced. Like we have to develop something, music for a movie, to work with the Symphony, or a special performance celebrating Buck Owens, or a special show with Led Zeppelin music. We are faced with a situation, and we look for a solution, and because of that, something new arises. That’s the way some of the our greatest hits have come about, collaborations with musicians from the Symphony, with Victor Garcia of Latin Jazz, or Old Town School of Folk Music for a Woody Guthrie tribute.

In their twenty years, however, they have never strayed from a musical vision rooted in the Mexican son, declares Díes, “We explored country western music and Buck Owens, but  we reinterpreted his music as a huapango. However, you will always recognize it as Owens’ music. Same with Woody Guthrie, where we did his song in norteño style.”

It’s like what immigrants go through, explains Díes, “When you are an immigrant in this country, you have to keep a connection to your own connections, but at the same time you have to incorporate a lot of what you are seeing and experiencing here, but in your own style, without forgetting your roots. I think that’s what we have done musically.”

Sones de México will be celebrating their anniversary with a musical extravaganza at Millenium Park, and Dies promises that artists representing Chicago’s Irish, blues, jazz and classical music communities are expected as well as Mexican dance companies. Founding member and Musical Director Victor Pichardo is writing the arrangements for the concert. All past members of the group are also expected to perform during the evening, including founding members René Cardoza and Raul Fernández.  “It’s like a one-night like class reunion!” exclaims Dies.

The concert also marks the beginning of a new phase for Sones de México, which will include new projects with some of the evening’s guests and the founding of a music school dedicated to Mexican music and dance.

It will surely be a night to remember, says Díes, “We started to practice twice weekly in August, with all the different elements of the show, but we won’t be coming together, all of us, until the day of the concert. We’ll see what happens!”

Sones de México, will celebrate their 20th anniversary with a free concert at Millennium Park’s Jay Pritzker Pavilion on Wednesday, September 3 at 7pm.

Check Catalina’s  weekly show Beat Latino on Facebook,  subscribe via iTunes, and check the playlist or download the podcast from the archives. Airs Friday and Sunday on Vocalo, where Beat Latino is rated #1 as show listened to at least once weekly by listeners!