We walked through downtown, only two blocks, like two bums in the middle of the night with no course, just hoping to find something to eat (with no luck); pizza sounded very appealing to him but we had to rush or I would’ve lost my last train to Pilsen. He gave up first and decided to walk back to his hotel. He appreciated the gesture of me staying last and walking quietly next to him with no obnoxious questions. I remembered my heart beating hard, the silent excitement, and when he finally said, “Gracias pero yo me voy a descansar,” I couldn’t let this opportunity pass. I reacted as any other devoted fan and asked him to sign the only thing I had with me after an exhaustive night: my Siempre es Hoy Tour 2003 flyer. 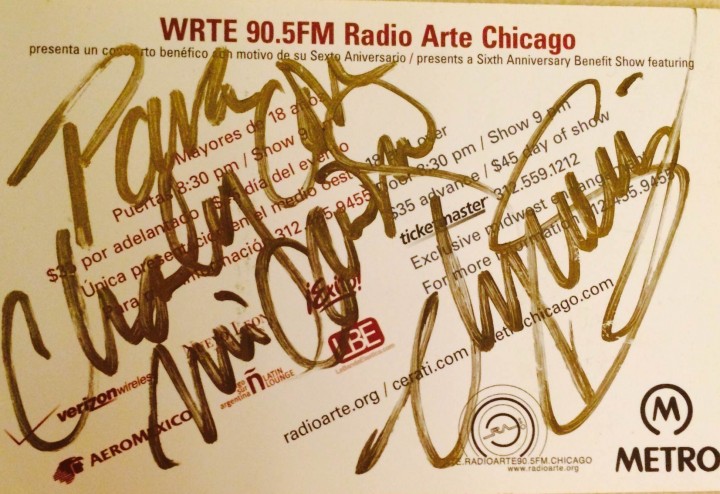 For many of Cerati’s Chicago fans, it was the most memorable night of him in the Windy City. There were other concerts–one three years before and another, three years after–but the 2003 concert at the Metro was the one organized by a prosperous and a creative youth, the Radio Arte staff, students and volunteers.

It was teamwork. As part of the youth initiative of the National Museum of Mexican Arts, we were celebrating the 6th anniversary of our journalism and radio production program airing live through the WRTE, 90.5FM; our program’s new logo; and our most recent internal gazette.

We can definitely name the VIPs who made possible Cerati’s encounter with hundreds that Tuesday night in July: Monica Ferro, Jesus Echeverria, Cesar Campa, Jorge Valdivia, among others. 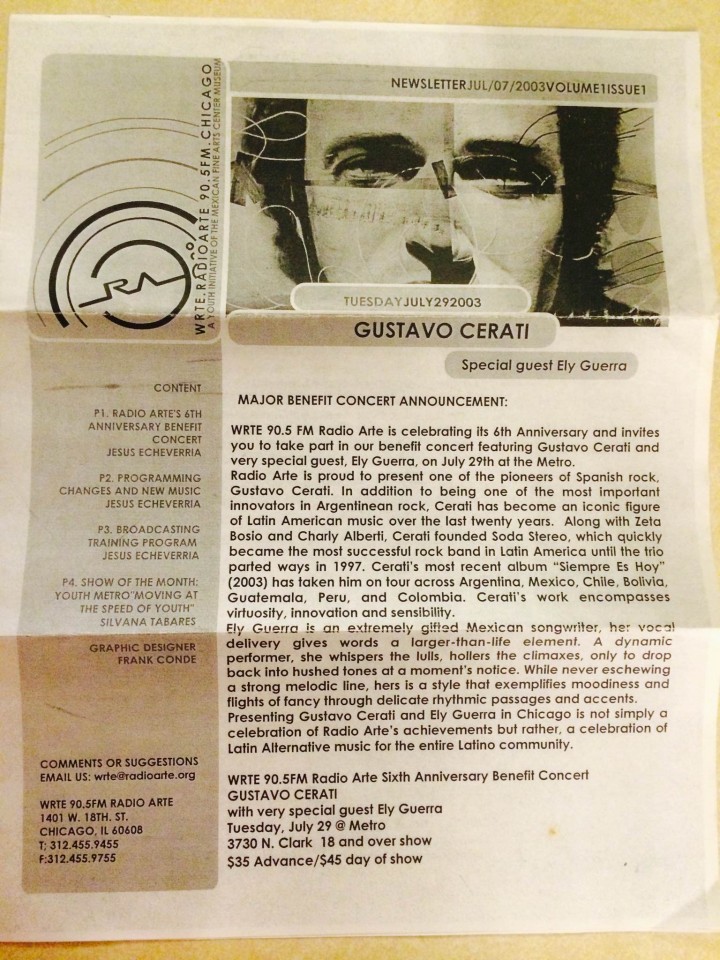 The rumors were spreading quickly in the narrow hallways of our homebase at 18th Street & Blue Island that Gustavo Cerati would be coming to our anniversary fundraiser.  It was my first year in RadioArte’s training program and I recently started to do some on-air programming during its glory years. An entire new generation was inspired by its innovative sounds–new pop, rock and electronica with some global beats and beyond. In Radio Arte, an immersed youth who needed to express themselves found an outlet to intelligently talk about culture, education, politics, community, arts and music.

Immediately, I volunteered for everything from distributing flyers for Cerati’s concert to serving as a bouncer backstage. I wanted to be part of this historical event, at least here in Chicago.

The day of the concert, people were elated. It was successfully sold out, with people arriving from all the Chicagoland area and surrounding states. I can’t recall the first song he played but I can assure that it was a whimsical scene. My mind stayed visually trapped by the images projected in the background, conceptual Japanese animation on pastel tones. After a few minutes I realized it was the perfect fusion with Cerati’s fineness.

At that moment, I was learning to appreciate and differentiate sounds and noise. I was rediscovering my passion for music and gaining the opportunity for easier access to it. To see Cerati play that night was like seeing a god playing a guitar: hypnotic chords, effortless management of the pedals fabricating endless atmospheres, environments and tones; he possesses one of the most exquisite and sexiest voices of Latin-American rock, no comparisons.

Gustavo Cerati marked generations from the Soda Stereo era to his unique solo projects, although only the hardcore diggers knew about Colores Santos or Amor Amarillo and after the rupture of the band only Bocanada could have given back unquestionable anticipation to his Chicago followers with his always evolving elements, rhythm and elegant metaphoric lyrics. Cerati is a central piece of the Latin American music scene with his revolutionary contributions to the rock and electronica world. Take my favorite Cerati album, for example, +Bien (Más Bien), with its intrinsic music atmospheres, where he risked and bet to a contemporary sound, to extraterrestrial horizons and to new collaborations. Cerati was beyond categories and labels.

Tabú was a Radio Arte hymn since its release from Bocanada. I confess playing it every time some radio listener requested it, because they never got tired of it nor did we. But in 2003, Karaoke also became a favorite, the number one on our lists.

Our lists? Radio Arte’s lists? What is the importance of that? Well, Radio Arte was an alternative medium for young generations – second generations of immigrants and newly arriving immigrants with Latin-American rock influences, not the mainstream rock-pop music from other stations. They identified themselves with our programming, Latin-American and Spanish-speaking independent current sounds.

Were we, this specific generation, influenced by Cerati, by Radio Arte or by the programming director in charge at that time, Jesus Echeverria? Echeverria who with his excellent taste kept our sound library updated with each and every Soda Stereo and Cerati solo albums, prompting many listeners to drive by the radio station in order to listen to our limited frequency while others tried to catch our 365 Live signal on the internet. 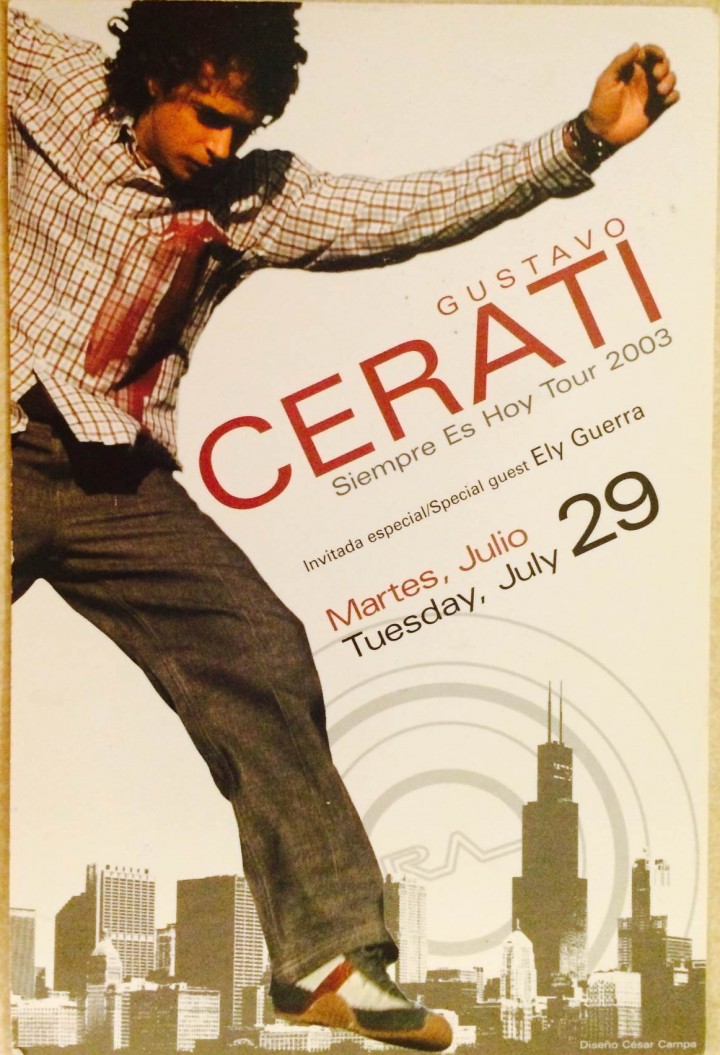 Cerati jumping to the Windy City was the best image you can have of him if you are a Chicagoan. The flyer was a combination design of Frank Conde’s new Radio Arte logo and the imagination and talent of Cesar Campa creating the image that will never be deleted from my mind. It represents the impossible coming true: hundreds of fans lined up to be in the front row to touch him and see him up close; called a cult artist and categorized as one of the best, you would never imagine him as humble as he was that day. Everyone wanted an autograph, a photo, a smile, and he gave it all. I want to believe that he knew he was doing it for a very unique crowd, a new youth working independently, making a change in its community.

For this reason I dare to say that Siempre es hoy was the best concert of Cerati in Chicago; we saw Cerati as the god onstage and his human side craving for some Chicago pizza.