Julio Chavez describes his space as an organic idea, he then explains why exposing Uriel Correa’s work in it is ideal. Correa’s work for the facility, with the array of vibrant colors included and Chavez’s vintage flair makes the mash-up seem spectacular.
Check out Correa’s work this Friday as it will be part of Pilsen’s Second Fridays Gallery Night.

Gozamos:What is Solid State as a space and for how long?
Solid State: Solid State is at the moment an organic/developing idea. The front has been open since March. I originally wanted the space as a boutique to display my finds: vintage clothing, leather goods, music and anything I feel is interesting. This idea has evolved, though. I am now working with friends who are designers and artists introducing the neighborhood to their work. I want to collaborate with people, to house and display everything in a way that makes whoever visits the space happy, good and transported from Chicago. I don’t know if this happens, but overall it is a comfortable, calm shopping and learning experience.

Gozamos: Are exhibitions the only events you hold in the venue?
Solid State: I would say that Uriel’s exhibit is the first. Before this we had a pop-up shop for Lilian Martinez, aka BFGF. Lilian makes beautiful clothing and accessories. I’m a fan, so when I secured the space back in March, the pop-up was the only thing on my mind. Amazing talent doesn’t always get exposed. It’s hard, so I want to help out and do my part. I’ll try to keep things interesting though. I have a club nite planned for August. Music, drinks, etc. It will be a treat for everybody who works hard. Come hang, unwind, meet people and make friends.

Gozamos: It’s been three years since your last show known to Gozamos. I apologize if I have that wrong, but what’s new? What can we expect to see in your upcoming exhibition?
Uriel Correa: Since the last show known to Gozamos, there’s been a wealth of local group shows with many rad people. Although, there hasn’t been any solo shows. “Better Late Than Never” will be an opportunity to show the public an exclusive and wider range of my work within the past few years.

Gozamos: Is your last exhibition, the reason for this exhibitions name?
Uriel Correa: The title, “Better Late Than Never,” came from my tardiness on exhibiting my work exclusively to the world, especially friends. The internet kills real interactions. People can see the pictures of the pieces I post, but the pieces themselves hardly see the light of day. The days of Tumblr have made me many art acquaintances I’ll never meet in person. Hopefully the local ones will make it to the show. 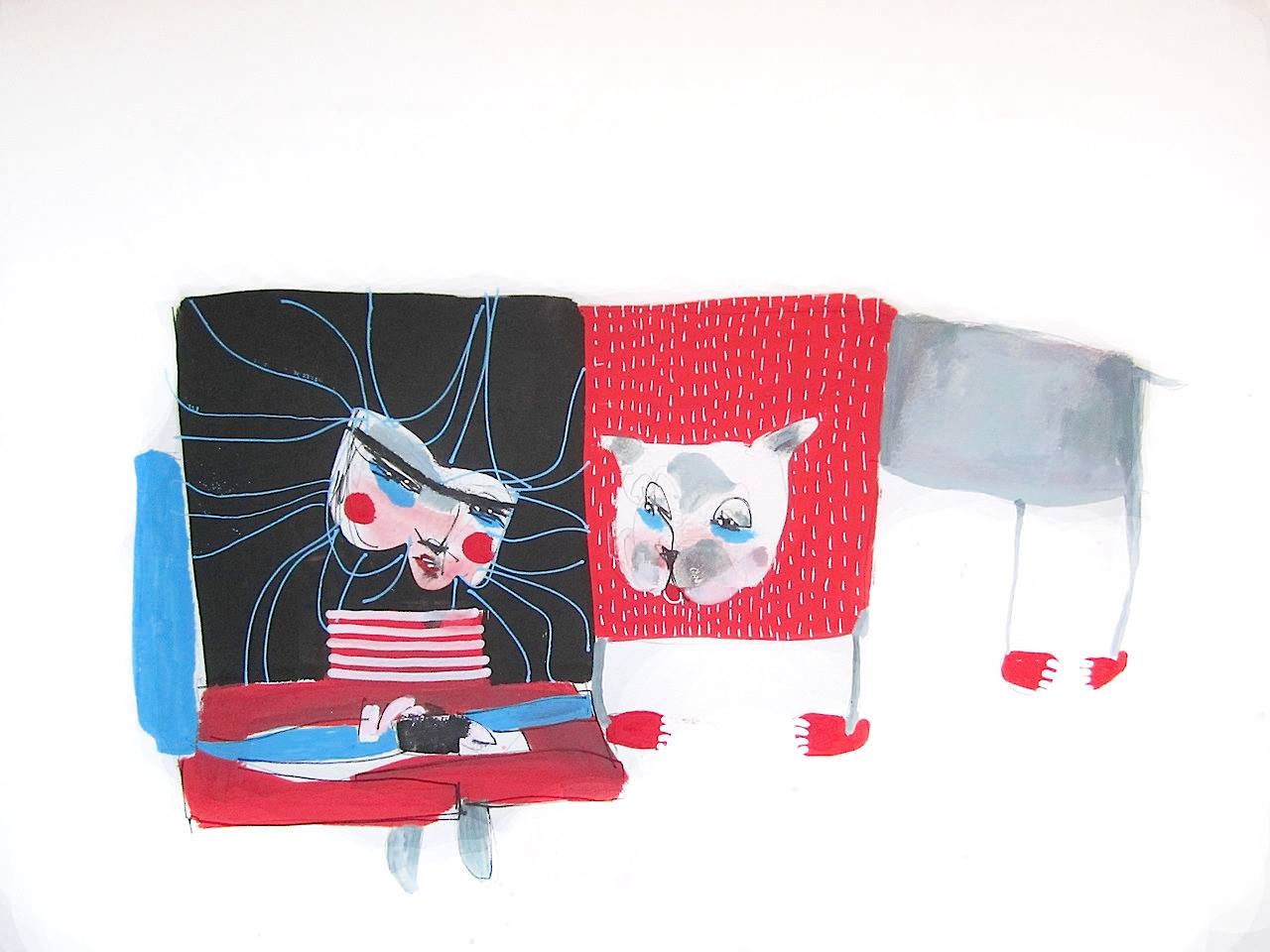 Gozamos: How would you describe this exhibition towards your past works? Where did the inspiration come from? If some works inspired you, would you mind describing which did?
Uriel Correa: The most current pieces which make up about half of the exhibition are inspired by Cuban posters from the 60’s. I really took to those styles and felt like I experienced them in a past life. I began experimenting with those colors and shapes and the method stuck. It’s very contagious.

Gozamos: How did the collaboration between Uriel and you begin?
Solid State: Uriel came into the shop. I believed he had heard from a friend, and so while there he mentioned he had some work he felt would work with the space. I had gotten offers before Uriel from just about everyone who had come in but Uriel followed through and kept in touch. He sent me images. I remember being blown away by the guitars, and at that moments decided that it needed to be a bigger event. I thought to myself this is too too good, and so after some back and forth Uriel came up with “Better Late Than Never.” 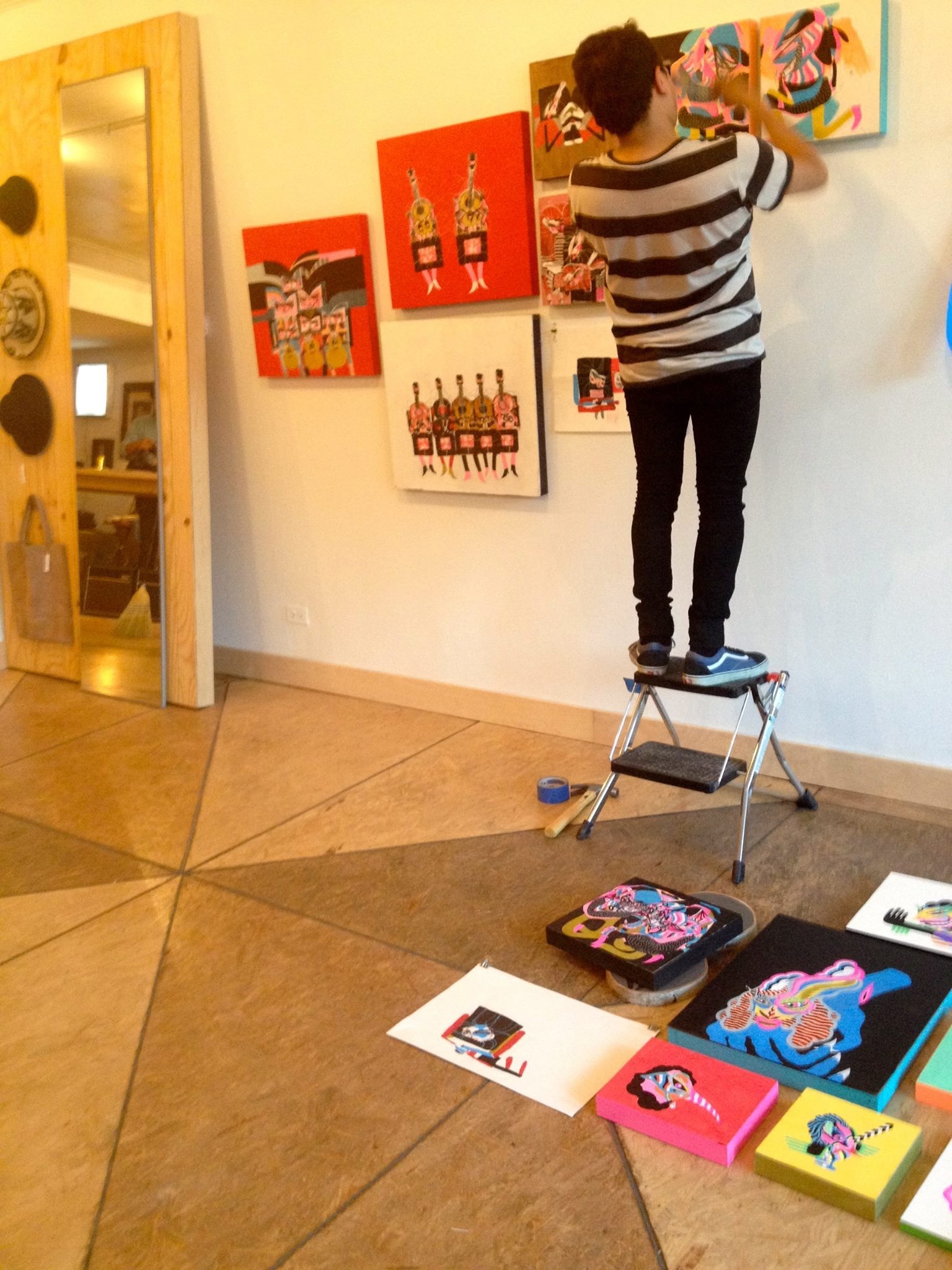 Gozamos: Why did you chose to display your recent works at Solid State, and how did your collaboration happen?
Uriel Correa: Interest drove me to visit Solid State one day. Once inside, I noticed that the place had a very specific feel and curation. Most vintage stores tend to be packed to the teeth but Solid State’s open and clean. I really dug the feel of the place and wanted my work there so I offered a couple of pieces for the shop. After seeing them, Julio (the owner) said let’s have a show. I was pretty excited about that so I compiled a range of recent and past works to compliment his space. So the shop itself was an inspiration for “Better Late Than Never.”

Gozamos: How did you get your start in the world of art?
Uriel Correa: My start in the world of art came from living in Buenos Aires for close to a year. Before the that, I had doodled a lot and studied artistic styles. Living there and feeling the vibrance of the South American contemporary and street art inspired me a lot. I’d often rely on painting to get me through the week. I didn’t know a lot of people at first so that was my main outlet. When I moved back to Chicago, I was pretty driven to keep painting heavily, attend exhibitions and take part in art related events. Luck was with me, and I met a lot of rad local artists and got invited to a lot of group shows.

Gozamos: What do you think you’ve contributed to the art community?
Uriel Correa: I can’t say I have contributed a lot to the art community. I’m not sure what I do has that kind of impact. What I have been kicking myself for is not being immersed in enough in the communities as of late. Although, there’s one place that’s always been a refuge and strong within it’s community. It’s called the Peanut Gallery, currently located in Humboldt Park. Please look them up and show your support.

Gozamos: How would you characterize the process of your works? Does your inspiration begin before or during your painting sessions?
Uriel Correa: Inspiration’s the worst friend who always shows up late or uninvited. Her brother, motivation, is just as bad. I rely on motivation, more but it’s always flakey.

Gozamos: If your art could be critiqued by one of your favorite artists who’s would you want to hear?
Uriel Correa: That’s a great question! But I’d rather hear a critique from a wacky person. Gilbert Gottfried telling me about my work would be priceless. Or maybe Andrew Dice Clay.

Here you go! Not to tell you how to do the profile, but it’d be really cool to feature Solid State just as much. Without Solid State, there’d be no exhibition. 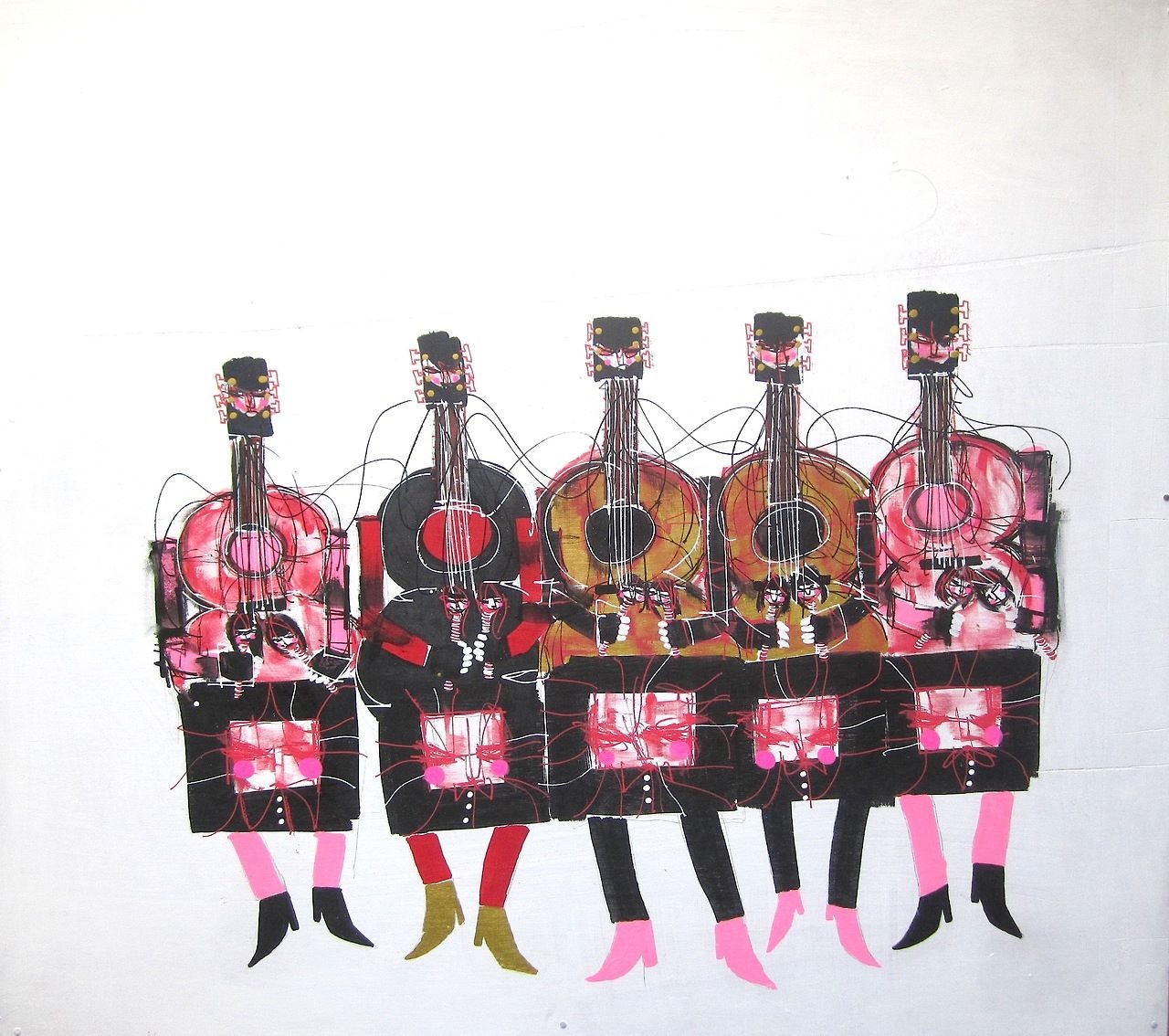