Anthony Hopkins was in Silence of the Lambs for only sixteen minutes. For that, he won the Academy Award for Best Actor and even more to the point—as you know—became one of the best movie villains ever. And yet, the level of sophistication concerning too many Godzilla reviews seems to find that not enough onscreen time indicates film failure. “Brevity is the soul of wit,” Hopkins needed just sixteen minutes, and for this summer blockbuster in May, Gareth Edwards’ Godzilla will leave you wanting more screen time in the way that you want orgasms to last longer.

Okay. It’s not that good, but hyperbole helps clarify that it’s already amazing; more would be better, but you’re already enjoying yourself. A lot. What’s not an exaggeration is that Godzilla, the character, succeeds because almost every other part of the film exceeds expectations in unexpected ways.

Beginning with the opening credit sequence, there’s, well, an opening credit sequence. When done right, they not only provide valuable information but help you transition from quotidian reality to this heightened state of expectation. Alexander Desplat wrote the score. I’m most familiar with his Julie & Julia, a score that’s perfect for a Nora Ephron film. Immediately, a comparison to John Williams comes to mind as, over and over, Desplat’s composing evokes the heavy orchestration and prominent use of the low brass section just as Williams’ did in Raiders of the Lost Ark. It does feel a little manic in a way that I can only describe as if a pinch Danny Elfman was thrown in. Like a dash of cayenne. Think opening credits for Men in Black. Williams’ work also includes Sabrina, a score just as delicate and lyrical as Desplat’s Julie & Julia, and something you should see if you haven’t.

Not as well known is the screenwriter, Max Borenstein. He’s a younger guy and hasn’t done too much yet. At the same time, he’s written a graphic novel prequel to Godzilla called Godzilla: Awakening. A delightful article drawing an important parallel in terms of Christopher Nolan’s realistic Joker to the realism of Godzilla can be found here.

This realism is crucial and bears itself out in the opening credits. From familiar images of sea monsters that look lifted from medieval maps to footage from the ’50s and ’60s of the military and nuclear bomb testing to this witty effect of redacting some of the credits, the film seamlessly makes its case. Right there. Opening credits. Specifically, that humanity has always known about these monsters of the deep, and these images on maps weren’t just creative thinking. Atomic testing made things worse. In a clever move, each line of credits comes up and then is redacted with that familiar swipe that we see on government documents. With music evoking Raiders of the Lost Ark, these first moments couldn’t come off any better. 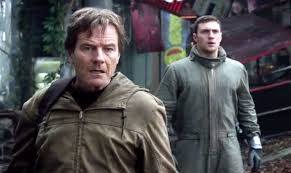 Alas, not all is perfect in Godzilla. Bryan Cranston and Juliette Binoche play the parents of our main character, actor Aaron Taylor-Johnson. Given that much of the Godzilla story is supposed to be about the human element, it’s a sad irony that this is the film’s weakness. Cranston is always glorious, but his hair in the movie was shockingly distracting. I know I risk sounding shallow here, but I couldn’t believe it. I know what they were doing in trying to make him younger with the hair, but I swear, you can see it on Cranston’s face. He knows his fake hair looks terrible. Still, it’s Cranston, and he’s marvelous. I was thankful for each second of his presence on screen…except where it mattered most.

There’s a scene at the beginning of the film that’s supposed to represent the utopian life before the monsters. It’s here where we’re given the chance to fall in love with the characters. Humor, affection, some scintilla of detail that will be just enough to carry us through a film like this, where the rest of it is too packed with chases and battles and epic heroism to pause for a moment of this type of humanity. For instance, Predator succeeded wildly in this way as we were introduced to each character that has some sort of quirk and there was even a recurring vagina joke. I hate to say Godzilla was a recurring vagina joke away from me caring, but…

A better example would be a lesser movie, Armageddon. Bruce Willis hitting golf balls off the oil rig in the direction of the Greenpeace protesters was terrible but hilarious. And when he was describing his crew, Bear, played by Michael Clark Duncan (I still can’t believe he’s gone), Willis describes him as “Probably the only black man on a Big Dog in Kadoka, South Dakota,” as images of Duncan on a motorcycle, roaring down a gravel road, with police cars in chase, play on the screen. I was in South Dakota when watching this movie in the theater, and the entire theater exploded in praise at this scene. Admittedly, this is an extreme example, but I could go on. And you know what I’m talking about.

Instead, we get thirty seconds of a weirdly-haired Cranston and Binoche talking in a car and trying to be cute. But it was just awkward. In a bad way. It was almost as bad as Chrisotpher Nolan’s failure at making any of his female leads compelling in all his Batmans. I was so excited when Maggie Gyllenhaul was cast but devastated when she died. Not because she died, but because I didn’t care.

The bigger sin, however, was the casting for our main character, Aaron Taylor-Johnson. He looks the part, but he just doesn’t have the voice or acting chops for this kind of role. Thankfully, the film is so well made, the human element seems less and less important as you let yourself slip into where the film wants you to go.

While the scoring is great, the sounds of Godzilla are shockingly effective. NPR covered this nicely in “What’s In A Roar? Crafting Godzilla’s Iconic Sound.” Bravo to Ethan van der Ryn and Erik Aadahl as the sound design team for this. Just as arresting are the visual effects. Jim Rygiel heads special effects. He’s won three Oscars and is known for his work on the LOTR trilogy. I had difficulty finding information about the special effects, so here’s a cached article if you want to nerd out.

This is one of the best teaser trailers I’ve ever seen. And true to the movie, it makes you quake with just a shrouded image of Godzilla and that incredible roar. I was completely prepared to write this movie off until this trailer. But before the roar, before the shroud, there’s a hauntingly beautiful and terrifying scene of these soldiers parachuting out of the plane, red smoke lighting up trails as they free fall from black cloud to open, jaundiced sky, headed back into darkness. That wide shot, along with the music, will stay with me for a long time. And the film is full of these unexpected moments of haunting beauty.

There’s another scene where Elizabeth Olsen’s character sees a random parachute. All of the sudden, planes start dropping out of the sky like dead birds. That’s disturbing enough, but because we were distracted, just as Olsen’s character was, by the somewhat whimsical image of this white parachute resembling something used in the ’40s versus the more modern parachutes of today, we are even more disturbed. Another moment like this involved Taylor-Johnson. Twice.

There are two scenes where he’s in peril, and he puts on a mask. As soon as he does, all sound retreats except for his breathing. It’s such an elegant way to create suspense and arrest the attention. Artful, even. Director Gareth Edwards is a somewhat new director, but what happened under his helm seems to reflect a wisdom and command of storytelling that belies his credentials. This, along with the brilliant move on the part of the plot of making Godzilla into more of an uneasy hero, buoys this film into something that merits its box office spoils. I’m finding more reviews go into more detail about the plot, so I’ll not add to the mix. I will say, however, that just like I’m still uneasy about my affection for Hannibal Lector, I felt this same unease with Godzilla. But more in that Joseph Campbell way and less the “Fff, fff, fff” fava beans and Chianti way.