Two weeks before co-directors Angus Macqueen and Guillermo Galdos’ film ‘The Legend of Shorty,’ a documentary on Sinaloa drug cartel leader Joaquin “El Chapo” Guzmán, was supposed to make its world premiere at the South by Southwest Film Festival this past March, Galdos received some startling news.

“Somebody I knew very well said to me, ‘They captured Chapo,’” Galdos said. “So, I called to confirm it and then called Angus and then the panic attacks started.”

Macqueen and Galdos quickly began to edit what they thought was a finished project, a film about Guzmán’s rise in becoming Mexico’s most notorious drug kingpin and being named Public Enemy No. 1 by the Chicago Crime Commission in 2013. In fact, ‘The Legend of Shorty’ had already been shipped to Austin, Texas for the festival. Both Macqueen and Galdos, however, felt including Guzmán’s arrest in the film was critical – even if they had to do it at the 11th hour.

During an interview with me at SXSW, Macqueen and Galdos, along with well-known Mexican journalist Anabel Hernández, talked about how they felt when they heard about Guzmán’s arrest on February 22 and explained why they don’t believe the official story of his capture.

When you found out on February 22 that Chapo Guzmán had been captured by Mexican authorities, what was going on in your mind?

Angus Macqueen: There was a bit of a panic. Well, we held off as long as we could to deliver the film to the festival. The truth is that we were still potentially up for an interview with [Guzmán]. He never absolutely said no to us. We had made contact with him on two occasions and he sort of pulled out. Looking back, I don’t know if he knew what he should say. He left everything sort of open just in case.

But you ended up submitting the film, correct?

Yeah, we ended up delivering the film [to SXSW]. Two days later I got this phone call from Guillermo. We had made a film we thought was complete. We all agree the film is stronger now. Before, we had made a film about a guy who doesn’t exist. Not having a modern image of him at the end of the film left you slightly unsatisfied. Now, there he is. Seeing him and what he looks like today gives a finish to the film we hope works.

Does the idea of Guzmán being captured feel real to you? I mean, you’ve followed this man’s story for so long as he evaded authorities, and now it’s over.

AM: I think we were all quite surprised. I don’t think it’s completely clear why he’s no longer needed [by Mexican authorities]. I don’t think any of us believe the official version of how he was captured. He was at a beach resort with his wife and his two children and one guard. That just doesn’t add up in any coherent way.

Guillermo Galdos: Someone [like Guzmán] would have dozens of people around him with guns. It’s difficult to understand why he would be alone in a resort in Mazatlán when he knew [authorities] were looking for him. The safest place for him to be would’ve been up in the mountains. He knew that. 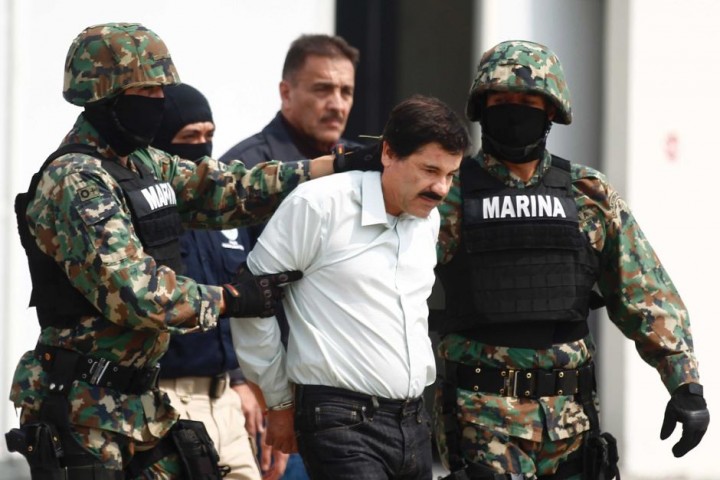 Anabel, how did you feel when you found out Guzmán had been arrested? You’ve been reporting on Mexican drug cartels your entire career. It must’ve felt a little surreal for you.

Anabel Hernández: I wasn’t surprised that he was in Mazatlán. He liked to be around the parties and in the scene and around all the beautiful women. But it’s absurd to believe that he was captured with only his wife and two little girls. It’s just impossible. Chapo always used to say that he would rather be dead than go to jail again. I think [Mexican authorities] made an arrangement with the U.S. government or with the Mexican government to capture him. When I saw him being arrested, it was shocking, but it felt like a movie. It felt fake.

Do you think his reign is over or will he be able to run the cartel from prison?

AH: He can still operate [the cartel] from jail. He did it the first time he was put in a maximum security prison. The jail is just going to be another office for him to work out of.

Angus, what were you hoping to ask Guzmán had he agreed to an interview?

AM: We wanted to ask him about how he ran his business. He clearly is an astute man and clearly knows how to talk to people and knows how to persuade them. He also understands markets and how they work. We were not going ask him, “How many people have you killed?” No, we wanted to talk to him about his business and how that worked. I would’ve also asked him why he wanted his wife, Emma, to deliver his two children in Los Angeles and why he wanted them to be American citizens…