It was a dark and stormy and freezing-ass cold night. And morning. And evening, and so on, for the next four days. I started regretting not packing a sweater, or sweatpants, or any kind of pajamas.

“The Australian guy kept trying to talk dirty,” Jeremy said. “He was terrible at it.”

Kate and I introduced ourselves to our Airbnb host, a bartender and booze rep named Pierce. After we had adequately recovered from the long-ass drive, we walked over to Pierce’s house.

Have you heard of this Airbnb thing? It’s like couch-surfing, but instead of half-heartedly offering to wash dishes or make a meal, you just straight up give your hosts money. From their website:

Whether an apartment for a night, a castle for a week, or a villa for a month, Airbnb connects people to unique travel experiences, at any price point, in more than 34,000 cities and 192 countries.

In our case, we stayed in a railroad-style house in the Bywater, a New Orleans neighborhood adjacent to the Lower Ninth Ward. Also known as “shotgun houses,” since you can, in theory, fire a shotgun from the backdoor and hit someone at the front porch, these houses have their rooms all in a line, each opening onto the next: front room, bedroom, bedroom, back room, kitchen. A villa it wasn’t, but for $25 a night, it was a step up from the hostel my sister and her boyfriend had stayed at that weekend. There weren’t any coke-fueled threesomes. It was cold as fuck, though.

Kate and I shared an air mattress in the backroom, next to the kitchen. Our bed had only one blanket on it, though I quickly stole an afghan off a rocking chair in the corner. A window next to the bed let in a draft: I could hear the pane rattling in the frame for most of the night. Despite my natural disinclination towards cuddling, Kate and I huddled together for warmth like two mildly bad-tempered chickens sharing the same roost. We ended up retrieving the sleeping bag from Kate’s car afterwards, though our hosts did provide us with some more blankets.

Our first order of business, after thawing our limbs enough to move, was breakfast. Bywater is a neighborhood in the middle of the gentrification process: mini-marts selling po’boys and forties side-eye the creep of yoga studios and vintage stores. Folks are buying up property because it has beautiful colonial architecture and, despite its proximity to the river, escaped the worst of the flooding from Katrina.

Gentrification, without going into its more deleterious effects on communities, can really flatten out a neighborhood’s unique food culture. I think of it as the Logan Square effect: the creep of restaurants working off a model that’s worked for places like Lula and Longman & Eagle, that throw bywords like “artisan” and “craft” and “authentic” around with alacrity. It can be good food–Lula and Longman & Eagle deserve their reputations–but the copycats are proliferating, with menus that are either boring as fuck or overly complicated. Occasionally, they manage to be both.

This is what I encountered in Bywater. Satsuma’s was a cafe and sandwich bar whose only real selling points were its organic juice bar, its gluten-free offerings (my sister has Celiac’s disease), and its proximity to our hosts’ home. The food was bland hippie-fare, lots of argula and quinoa and sprouted-whole-grain bread. I’ve been spoiled by Chicago’s love affair with fats, I suppose. Even the artisan cafes use things like rendered duck fat and cultured butter.

Booty’s is a cocktail bar that served international street food. They had a modern interior, dark stained wood and chrome polish, and long communal tables. The food was fairly good–though the irony of paying $9 for “street food” never ceases to be striking–but I kept feeling like I was supposed to be more impressed by their cosmopolitanism. The thing about street food, for me, is that it tends to come from folks with limited menus, specializing in a few dishes. It’s deeply embedded in distinct cultures. When it’s divorced from its origins and its context, you get a place like Booty’s: by and for Americans with enough money to pay $9 for banh mi sandwiches. And with really weird tamarind agua fresca that tasted like pickles. What the hell was that? 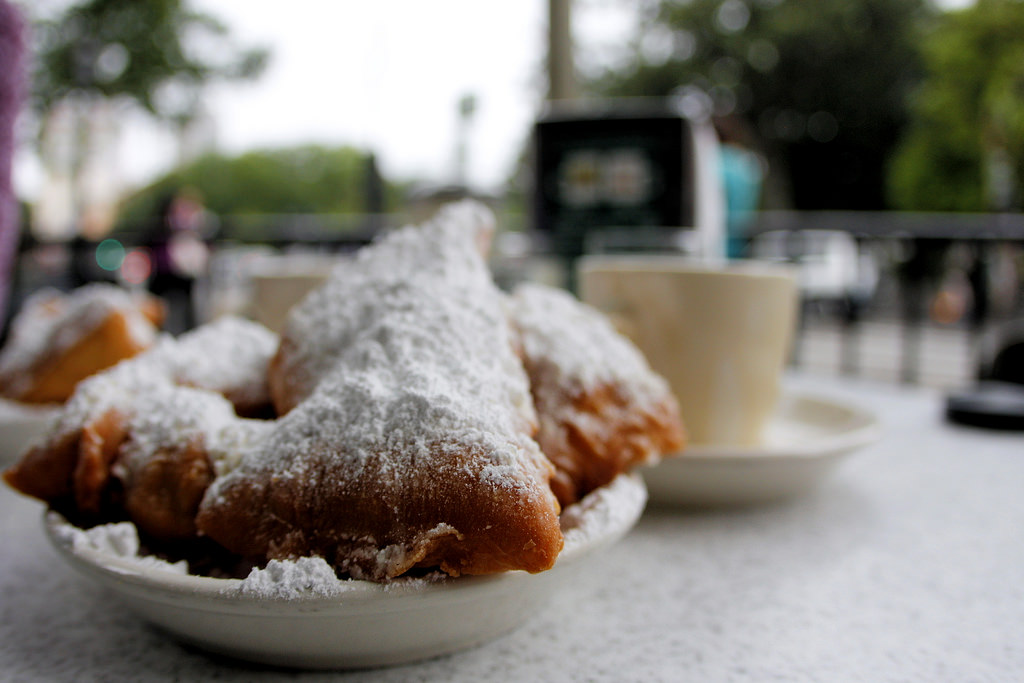 Beignets are the perfect pastry, when done right. Their beauty consists in their simplicity: the dough is just butter, water, flour and eggs. Then they’re set into a deep fryer until a beautiful golden brown. They must be served and consumed almost immediately after being fried, preferably with a small mountain of powdered sugar on top. It’s the perfect id food, immediately satisfying amounts of fat and sugar, but light enough that it won’t weigh you down.

The main beignet tourist trap in the Quarter is Cafe du Monde; you can find it, literally, in any travel guide. It’s impossible to miss. The green-and-white awning and the hordes milling around outside of it give it a kind of circus feel. We opted, instead, for Cafe Beignet, a place that’s a little further away and much smaller. The circus feeling remained, though: beignets are smaller and tastier versions of the elephant ears I ate every year at the state fair in Vermont. Hot enough to singe your taste buds, sweet enough to pull you out of the last vestiges of sleep. Beignets are like a sloppy fairytale kiss that waken you from a stony sleep or stormy hangover. Perfect.

A beignet a day kept the cold at bay. We huddled close to our paper cups of tea and chicory coffee, feeding the sparrows that darted in and out of the cafe, swooping over the heads of our fellow tourists. This is what I’d chased all the way south, through storms and floods and drafty windows. I brushed powdered sugar from my shirt front and started to cautiously believe that spring had–maybe, despite all evidence to the contrary–arrived.