I first heard Amarante’s voice on a buzzy station our family car caught on Los Angeles’ I-5 heading to Tijuana. I was 15, trying to distance myself from family by pouting in the backseat of the car (since I couldn’t do so financially or emotionally)—black hair to my shoulders, arms crossed over a TOOL t-shirt which may as well have been a name tag: I was punk. The station was barely audible, like a rain stick broadcasted live. My father had switched to it after I’d made a snide comment about all the classic rock we’d been listening to. It wasn’t that I hadn’t liked it, but that I was trying to be independent, better than my parents, and classic rock was something my father knew instinctively—I couldn’t compete. Trying to bond with me, he’d quiz me on the name of each song that came up on the radio, and by the seven-hundredth time I’d failed to respond correctly I snapped, “Can we listen to something that doesn’t sound like shit?”

So we were listening to static. But, as we reached the outskirts of Los Angeles, the station cleared up with the sound of an accordion pulling, lonely and tense, a strum of a folk guitar. I bet you’re wondering how I knew that this would come to an end… the man’s voice, grainy, like he was singing through a 1930’s film projector, sung with the refrain of poetry, intimate, deliberate.  “This guy sings beautifully,” my father said, and for the first time since adolescence I agreed. “Very beautiful.”  But it’d be three years until I’d find Little Joy’s album on some torrent site, by which time Rodrigo Amarante would be featured on collaborations with the likes of Devendra Banhart, Natalia Lafourcade, Gilberto Gill, and more. By that time my father had passed away.

Now, Rodrigo Amarante debuts alone with Cavalo: what is there to say? 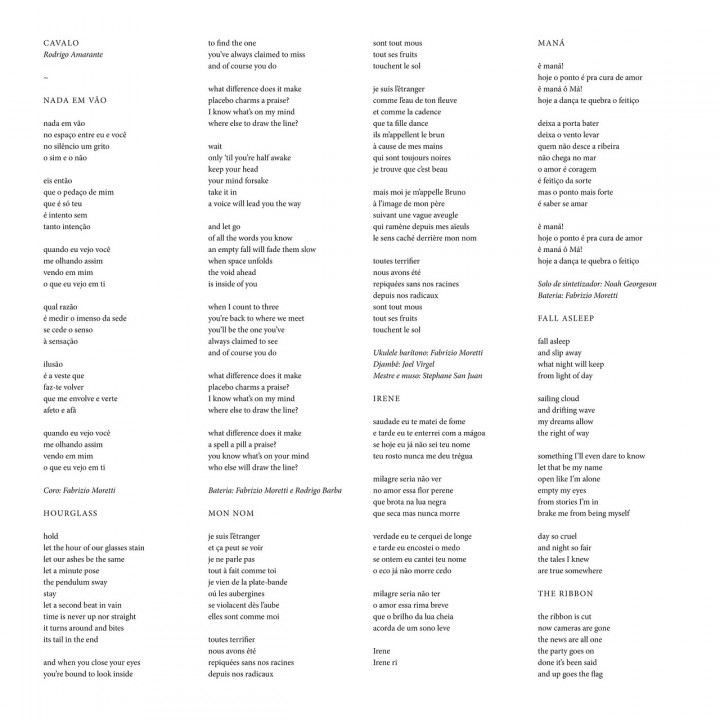 Amarante, as an multi-instrumentalist and romantic, has an ear for nuance, for detail. Take a song like “Mon Nom”: two-note arpeggio and metronome-beat duo is the would-be base for the song’s verse (a fairly basic, almost boring arrangement). It is adorned with triangles, little cymbals, tapping, shakers, a dissonant saxophone and another guitar until the song fills out and includes sounds of rain, he takes drizzle and adds wind and warmth and the slaps of heels on puddles, and so on. And all without excess.

“Nada Em Vao” is a song which thrives on anticipation: it is a tease. We open like down a staircase, a piano tapping over a guitar plucking a bass-string dulling: DRUM. A thud marks the place where Amarante’s voice comes in, na na na, na na na. An odd, high-pitched resonance tests the space — there is a lot of space. DRUM. He sings, nada em vão, no espaço entre eu e você, no silêncio um grito, o som e o não: “nothing in vain, in the space between you and me, in the silence a scream, the yes and no.” DRUM. The guitar builds upwards, back up the stars, the piano gets poppier, a choir sings, a saxophone warbles. DRUM. And the resonance tests the space again.

Reminiscent of songs like “Irene, I’m Ready”, and “Tardei”, which resound Amarante’ work with Little Joy, Natalia Lafourcade, and Devendra Banhart, the track “Cavalo”is a song at its most obviously Amarante; sung with a unique and honest and inescapable loneliness that his voice loops like ribbon wrapping tight around your finger, pulling inward: I-re-ne, I-re-ne, I-re-ne. It is my ultimate regret I do not speak Portuguese (more specifically, Brazilian Portuguese) so that I may understand fully the words Amarante is singing, because what I can understand—songs like “I’m Ready”, “Hourglass”, “The Ribbon” written in English—are ripe with metaphor (an ox has been killed, in display the head), precise in sonics and verbiage (hold, let the hour of our glasses stain, let our ashes be the same, let a minute pose the pendulum sway) and poetic beyond the constraints of lyrics as musical ‘accompaniment.’

But perhaps the more important thing to say is Cavalo is something, which, two years after his death, reminds me of my father. Not because there is an inherent connection between a three hundred pound man from Los Angeles and Rodrigo Amarante, nor because Cavalo, at its deepest, encapsulates the kind of melancholy I feel when I cannot reach an arm out to touch my father. Rather, there certain things—beautiful things—that I am compelled to share with the people I love. Cavalo is such a thing. I want nothing more to wrap its physical copy, CD, in Christmas paper without a tag and hope that it reaches my father, wherever his ashes are at this point. But perhaps it will be best, and most adequately capturing of Cavalo’s spirit, to play it at night, singing it to myself quiet enough for him to overhear it.

Cavalo by Rodrigo Amarante is currently available to stream in its entirety on the New York Times Press Play page.