[Quick note before we begin: I’m running at Indiegogo campaign to help me get to a fantastic writing workshop in San Diego this summer. If you’ve enjoyed reading my columns, please consider donating a few bucks. I’ve got t-shirts, books, and prints in exchange for donating, and my mom is offering people baked goods, because she’s the best. Thank you!]

I’ve never really been able to back down from a challenge. Even an unintentional one.

This has caused problems in the past, and will probably continue to be in the future. I’m not quite as bad as Marty McFly when someone calls him a chicken (Back to Future, anyone? Anyone? Bueller?), but there’s definitely a knee-jerk reaction. Don’t tell me what I can’t do! I do what I want! Even when it’s stupid!

Deciding to sample every single cocktail at the Chicago Reader’s Cocktail Challenge was definitely stupid. In my defense, I didn’t realize at the time that there would be twenty of them. 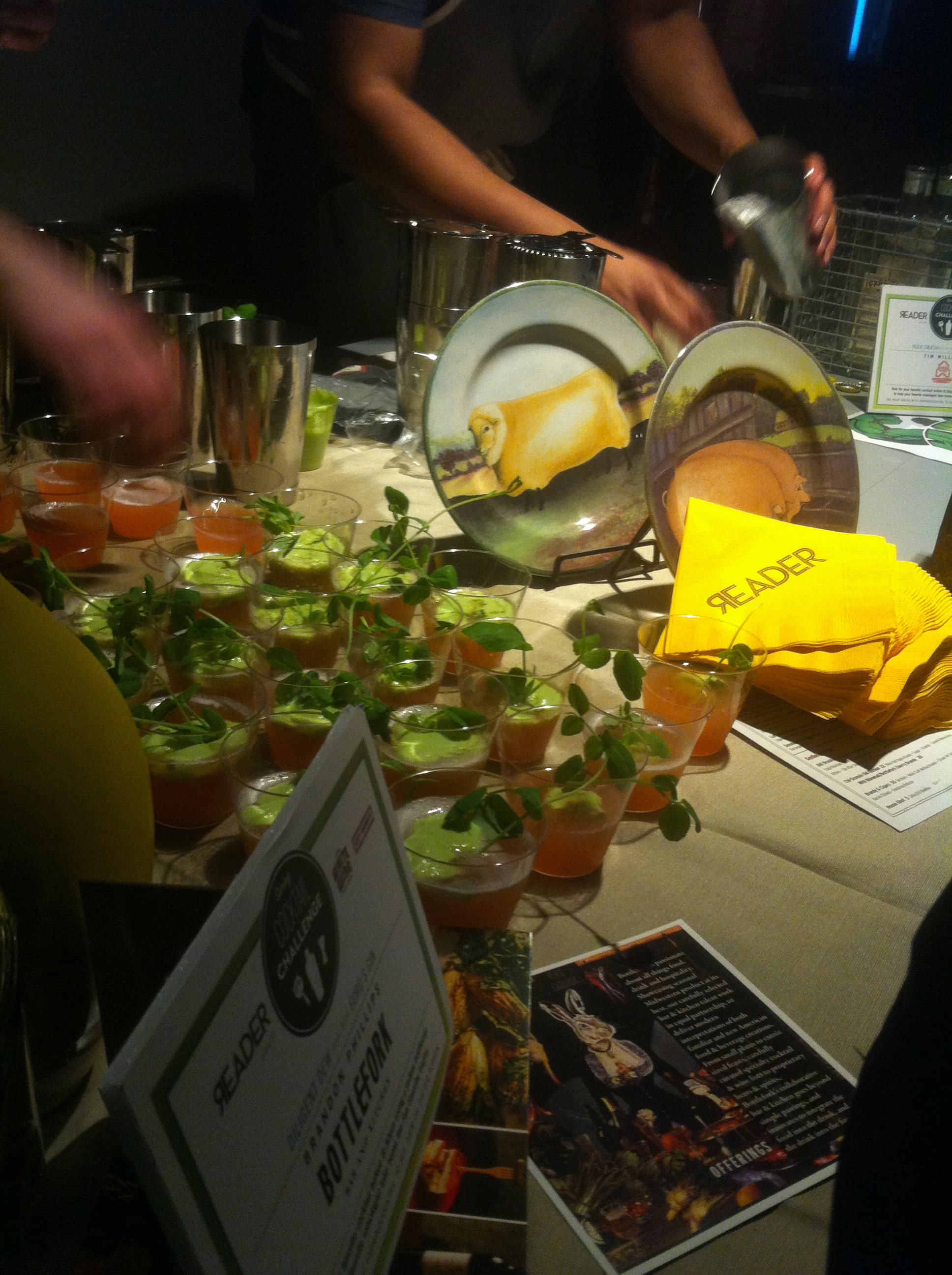 The Cocktail Challenge is a weekly column in the Chicago Reader. One mixologist challenges another to use some weird ingredient to make a cocktail, a similar premise to their Key Ingredient column. Most recently, as of this writing, Nandini Khaund challenged Sean Patrick Riley to use dandelion. Khaund, the week before, made a cocktail with pig blood.

The event was, I think, along a similar basis. Like at their Key Ingredient Cookoff. Very little was provided in the way of explanation before the challenge, and while the kind lady at the door provided me with a map of each of the stations, there weren’t programs or a list of rules. I think that everyone was just challenged to make some kind of green-colored cocktail, as part of the spring theme. Attendees had bright yellow bottle caps to give to the mixologists that made their favorite drink of the night.

The “challenge” bit is obviously directed at the mixologists, and not the drinkers, but like I said, I’m never able to ignore a challenge. Not even an unintentional one. 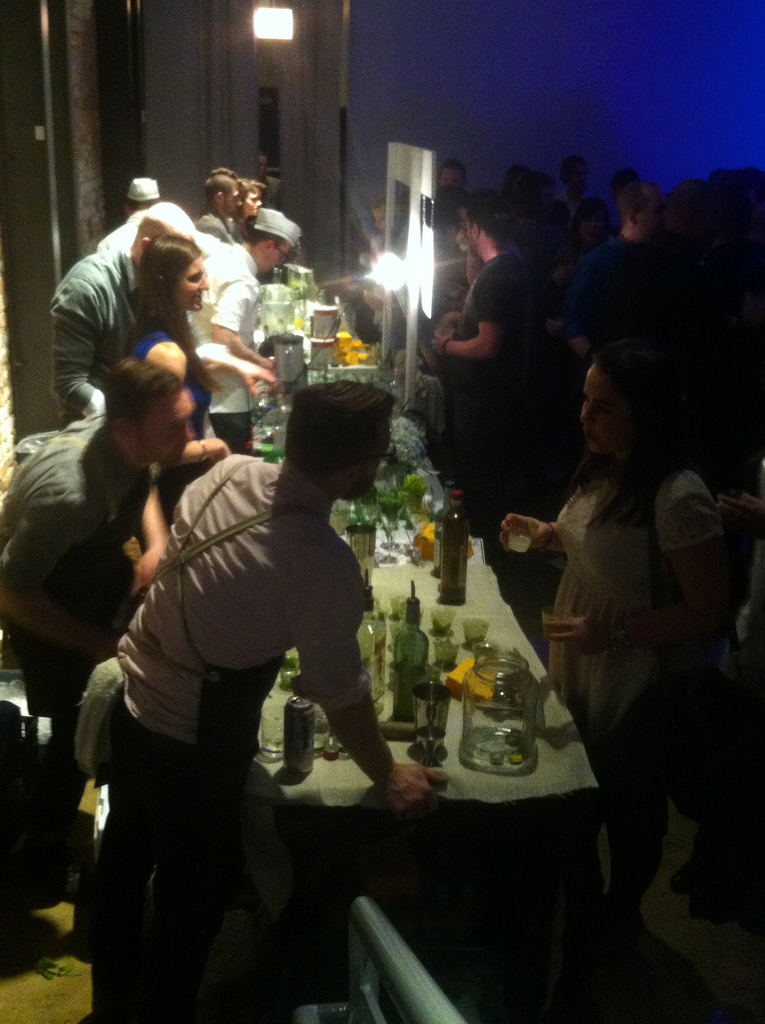 Because I’d made it my goal to drink every single cocktail, I already knew that taking notes on what I drank would be difficult. But how would I be able to write up the event without them? Luckily, we live in an age of miracles and wonders and smartphone technology. I decided to take notes about each cocktail on the napkin that came with it, then photograph it. 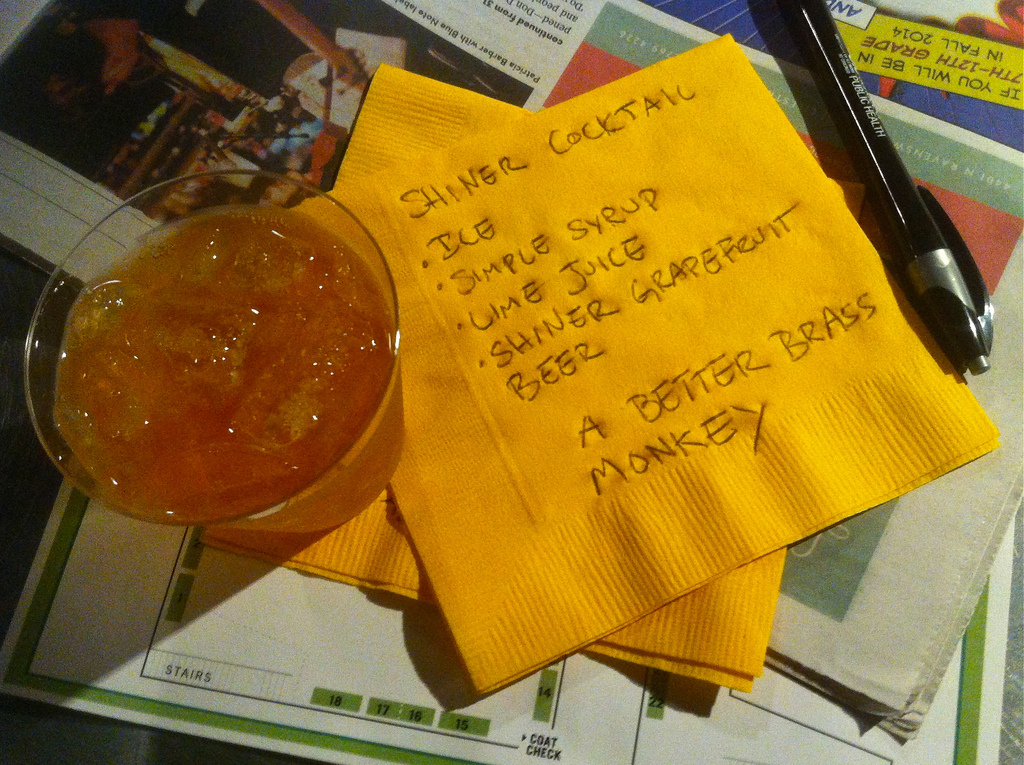 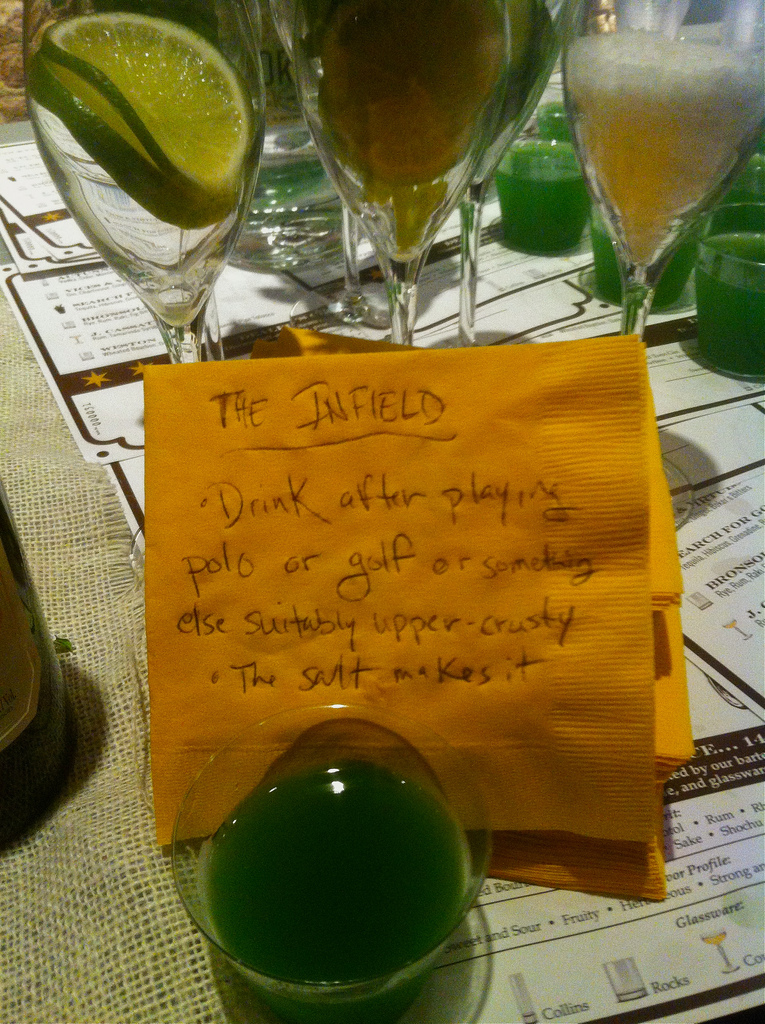 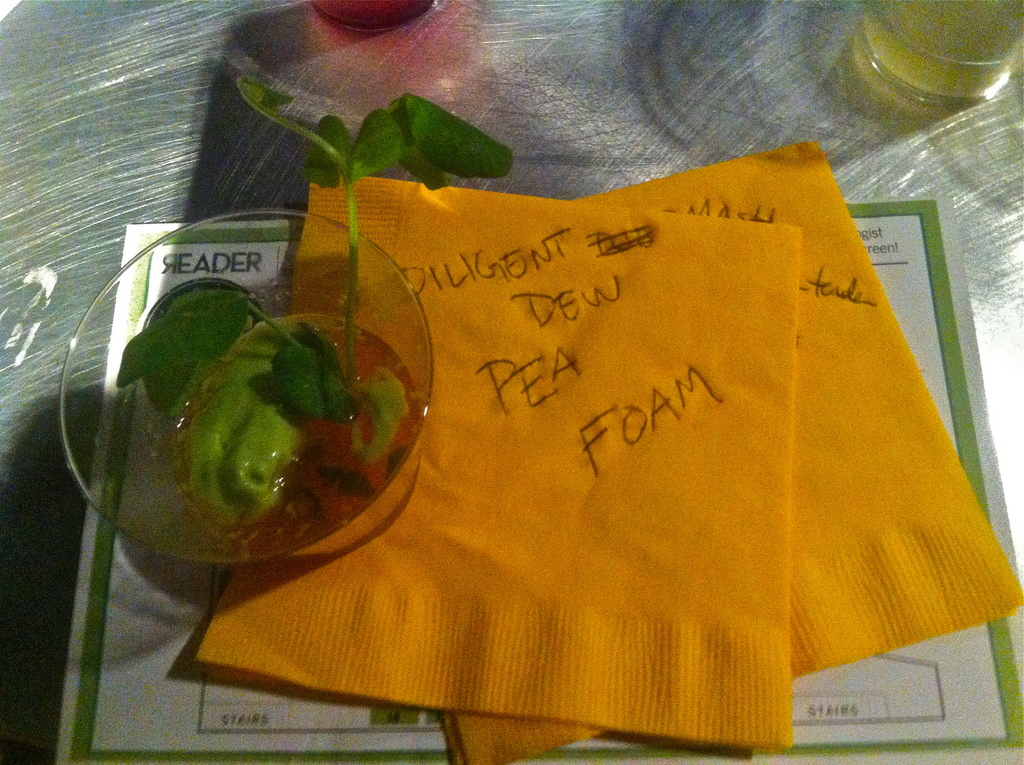 Some of the notes, as you can see, were pretty basic. To be fair, the fact that the Dilligent Dew had foam made of pea shoots was the most interesting thing about it. 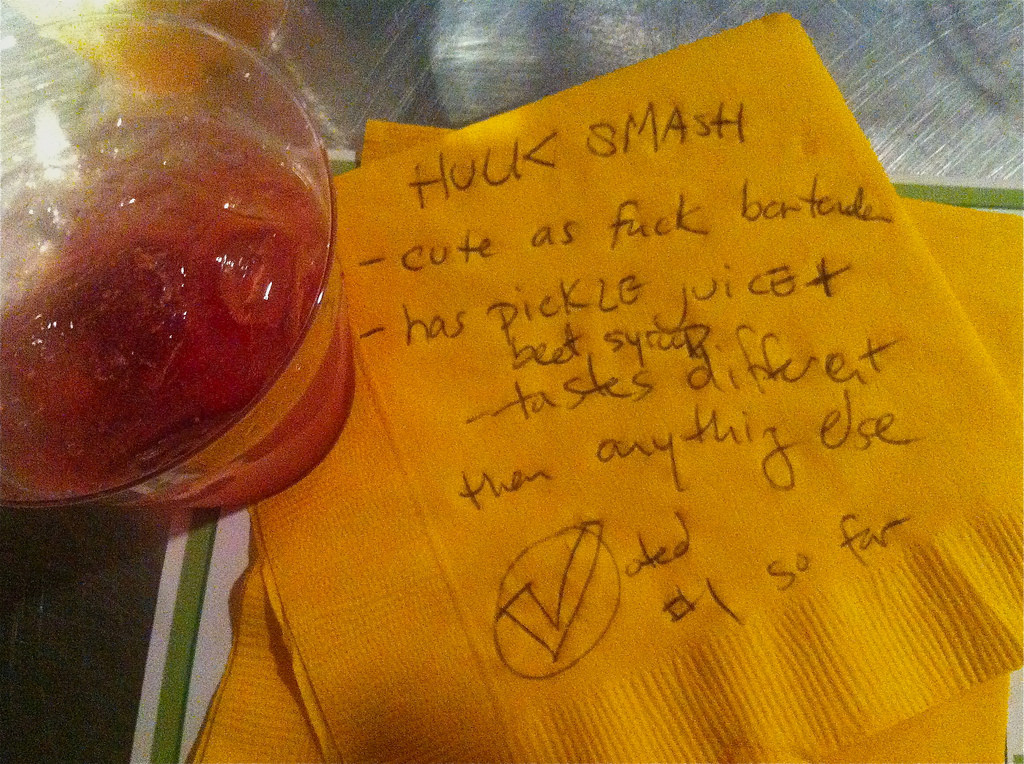 And the person that mixed the Hulk Smash was cute as fuck. I’m only human, and at this point, I was a fairly tipsy human. I was impressed by the beet syrup and pickle juice, and the fact that a really lovely person served it to me. Most of the other servers and mixologists (unsurprisingly) seemed a little stressed out by the horde of drinkers descending on them. Anyway, the Hulk Smash got my vote.

Although that was before I had the Wonder Mint malted cocktail. 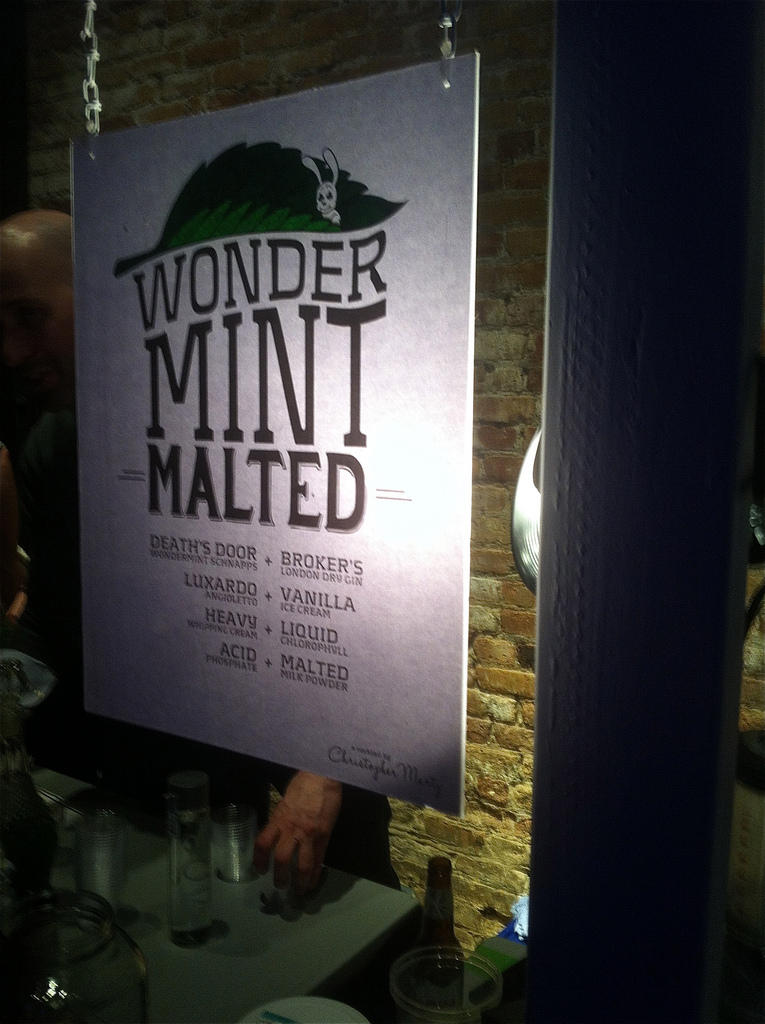 Not only was the Wonder Mint a great concept (BOOZY OLD-STYLE MALTED MILKSHAKE!), but it was delicious and served by guys wearing soda-jerk outfits with bright green ties. Halfway through the night–about an hour and close to a dozen cocktails later–I decided I needed to sit down and clear my palate. 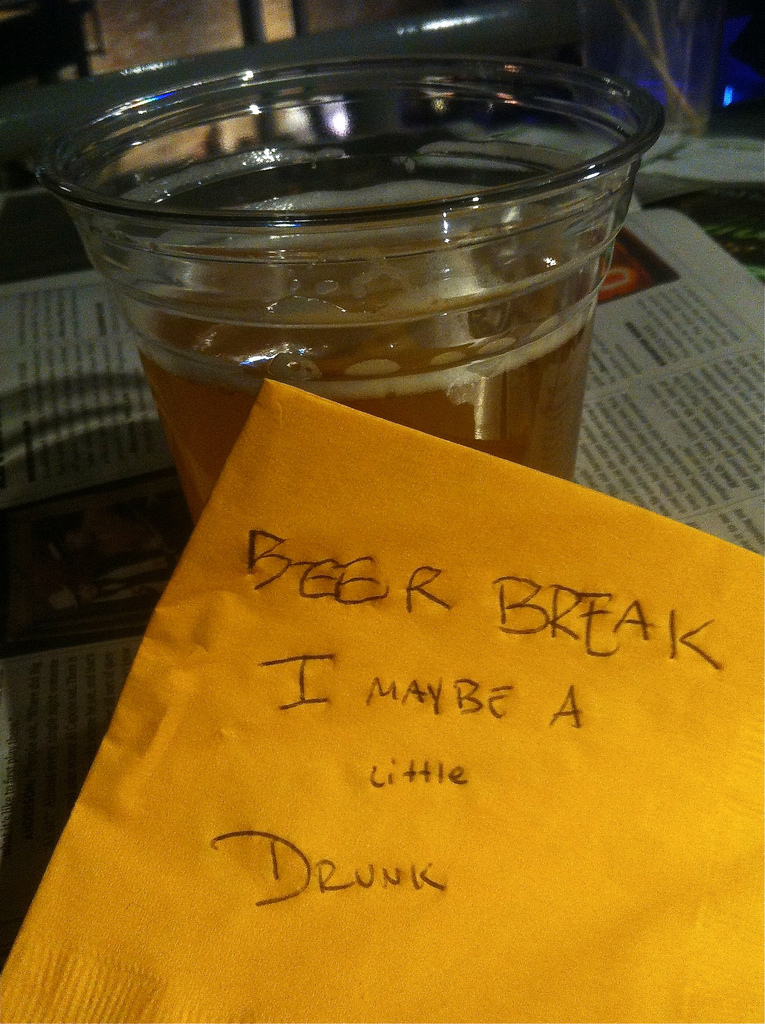 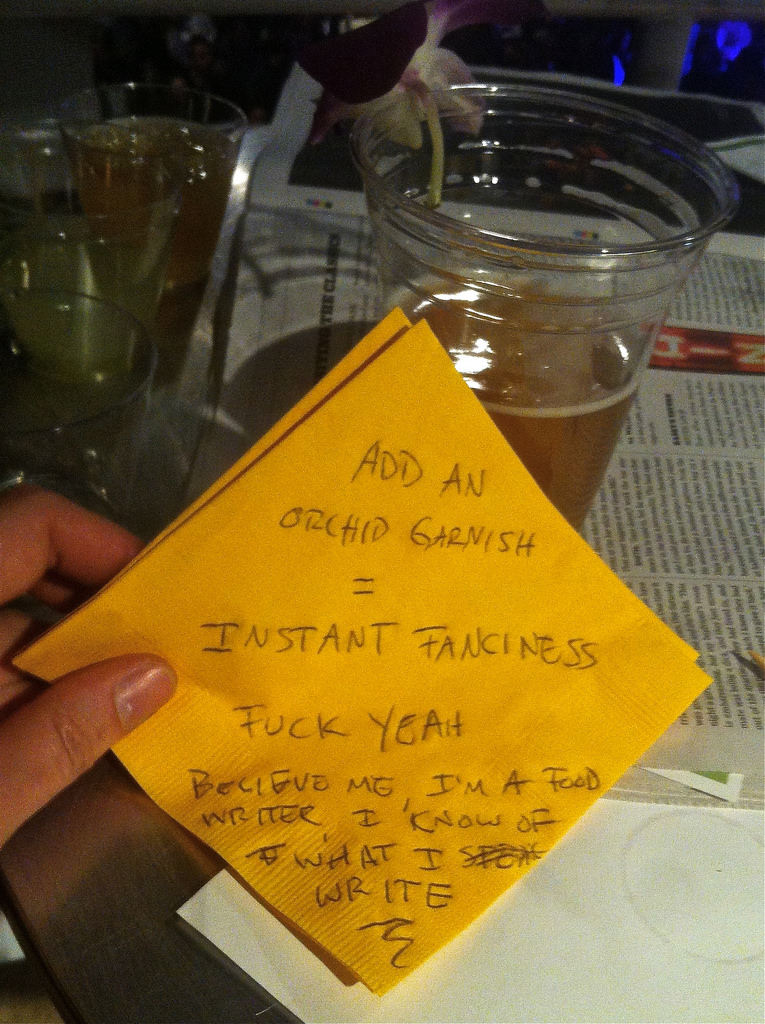 I was feeling pretty clever, obviously. Just then, the Cocktail Challenge’s MC announced the winner of the night. I didn’t catch who it was, though I later found out that it was Will Duncan of the Punch House in Pilsen. He very generously gave me a five-minute interview, which you can listen to down below. 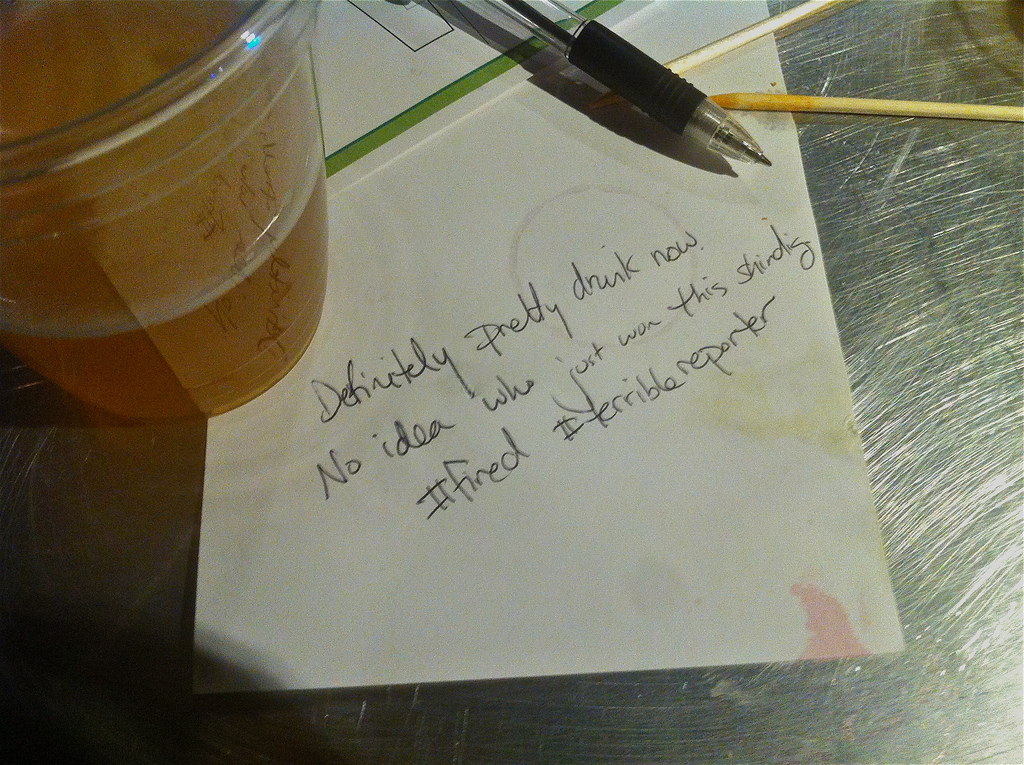 The legibility of my writing and the clarity of my photographs took a nosedive at this point, and in retrospect, this beer was probably my event horizon. There was no turning back after this. I had reached the point of drunkenness where every drink tastes better than the last. 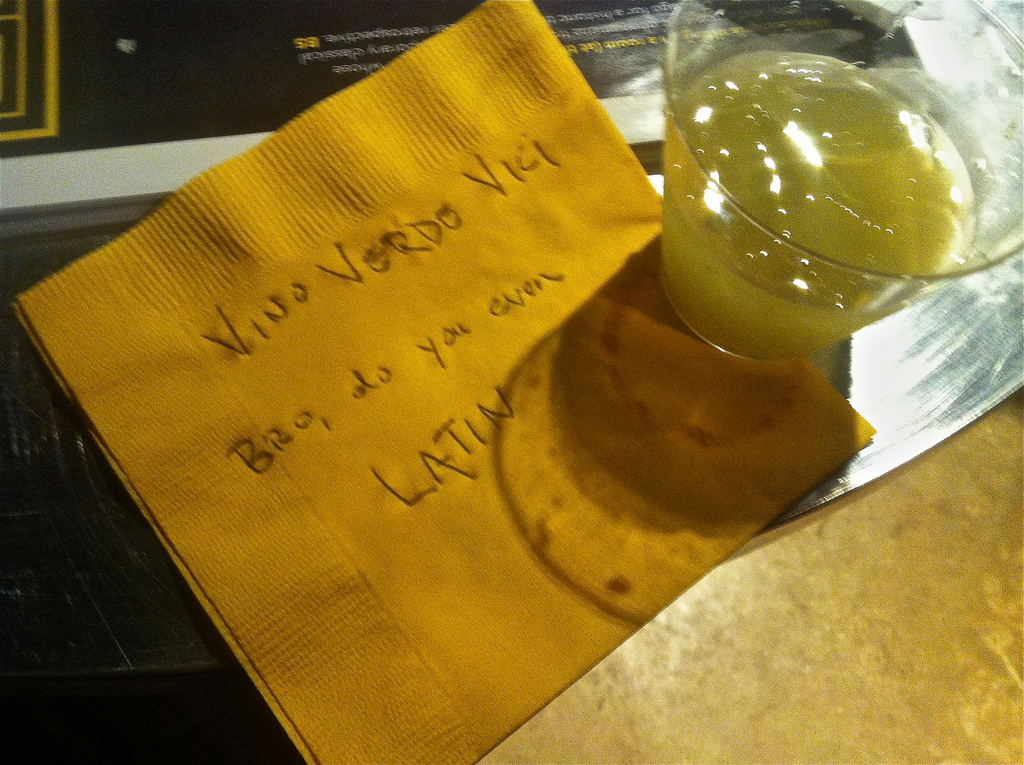 Never believe anyone who recites the “Liquor before beer, you’re in the clear” proverb at you. They’re wrong. I was not in the clear. I think that napkin says “last drink of the night”. I don’t remember what it was, who made it, or if I even drank the entire thing. (I suspect I did.) I do remember petting the taxidermied raccoon. Shortly thereafter, I stumbled back out into the night.

About two and a half hours had passed. I had drunk at least part of 18 cocktails, plus a beer. This meant that there was tequila, gin, wine, beer, mezcal, whiskey, absinthe, chartreuse, schnapps, and god knows what else sloshing around in my gut.

I felt okay while leaving the Chopshop. Drunk, but fine. As I was standing on the Damen blue line platform, however, I continued getting drunker. I had drunk so much, so quickly, that all the alcohol didn’t hit my bloodstream until I was on my way home. That level of drunkenness usually leaves me in a state of existential bemusement. How did I get here? What could I have done to avoid being this idiotically wasted?  I’d like to believe there’s some kind of accidental poetry going on in that last napkin, a haiku born of extreme inebriation.

By the time I got home, the bemusement had devolved into something worse. I was actually sort of impressed with myself–after all, I hadn’t done this kind of drinking since college. I felt like this was a momentous occasion, deserving of a record. I’m almost thirty, after all. The number of times I’ll be able to get this drunk in my life are severely limited, unless I plan on getting a liver transplant by the time I hit middle age.

Thus, I ended up with a bunch of drunk selfies that I have almost no memory of taking Being a writer carries an odd expectation with it: that you will seize life with both hands, damn the torpedoes, full speed ahead. You are expected to seize upon any opportunity; to drink deeply and desperately of all experiences, like a drunkard at last call. It’s expected that all artists will, either occasionally or habitually, go too far, drink and eat and love and feel to excess.

It’ll all go in the memoir someday, is a refrain you hear from any writer, myself included.

I’ve decided to call my memoir Story Of My Goddam Life. This episode will maybe get its own subchapter: “Worshipping at the porcelain altar: how I eventually learned to appreciate my limits while drinking.”

Sometimes, it’s better to let challenges pass you by, especially if they’re completely self-imposed and detrimental to your health. And the interview with the evening’s winner, Will Duncan?