I first nabbed a Jose Pulido work 7 or 8 years ago at Renegade Art Fair on Division Street. I have been giving his work as gifts ever since: stickers, shirts, prints. They’re all amazing, and they bridge some of the unnecessary gaps that exist in the world: the gap between culture and background, the gap between mainstream pop culture and cult classic followings, the gap between Mexico and America, and the gap between past and present. It has been said that the English invented soccer, and the Brazilians perfected it. Well, if Posada perfected the genre, Pulido has taken it to the next level with a modern twist to a classical movement, pop culture of today infused into ideals of yesterday. By acknowledging and paying homage to our past, we can arrive at our present and take this thing into the future, and that is Jose Pulido’s gift to us.

In this artist profile, we catch a glimpse into the life and times of the artist, The Simpsons enthusiast, and the new dad as he looks to up his productivity and take his craft to even higher heights than what we already know. 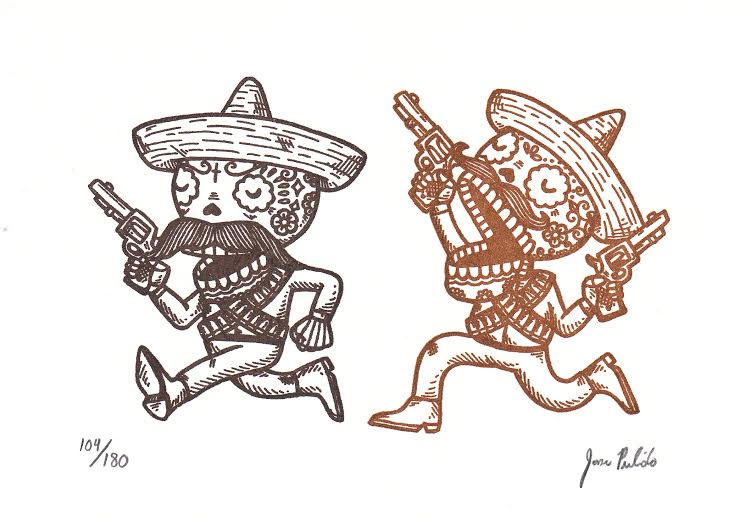 First of all, congratulations on your first born. Did you have a boy or a girl? What’d you name him/her? My wife and I had our 1st born (Rosie!) over the last year too, so this stuff interests me. It’s exciting…

Thanks, we had a girl, her name is Isabel.

What have you been up to lately, work-wise, and how has becoming a father affected your creative process?

Lately I’ve been trying to create more drawings. I’ve actually drawn very little the past 2 years and really want to make an effort to just draw more. So far this year I have already matched the number of finished drawings that I created in all of 2013, although most of those were done before my daughter was born. It’s been difficult to set up a schedule to draw or work since I became a father so my creative process has been affected a lot. My wife and I are learning more about being parents so it has gotten easier recently.

When did you decide to go into screenprinting? When did you realize that this was the thing for you? Any family members or close friends who were super supportive or extra encouraging along the way?
I started screen printing in 2003 after I took a Printmaking class in college. My brother and I had talked about random T-Shirt ideas for a long time and we made it a point to learn screen printing to make some of those ideas a reality. I was able to learn the techniques and then teach my brother, so we explored the joys and mistakes of screen printing together.

On the Mis Nopales site, you boast “The largest selection of original Mexican culture T-shirts.” How have you made that your reality? How did the business get started and how do you ensure that that standard is upheld?

My brother and I started our company(Mis Nopales) in 2004 as an outlet to bring forth the T-Shirt ideas we had talked about for so long. We made it our goal to create a large selection of original Mexican culture T-Shirts and over the years we just kept adding different designs. At one point, we offered nearly 60 different T-Shirt designs that were designed and created by us. Recently I haven’t been as involved as I have been in the past, as I’ve taken time from creating new designs for the Mis Nopales website to pursue my own individual artistic endeavors. I do hope to be able to create some new designs this year for that website as this year will mark 10 years since we first began. 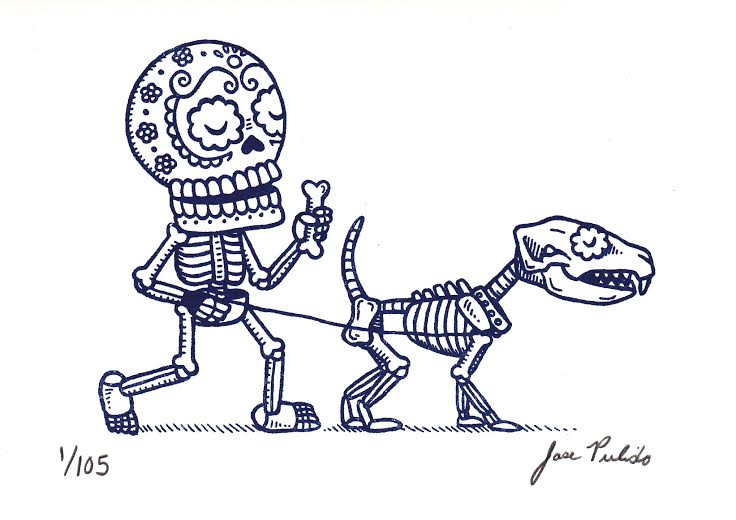 You’ve represented and woven calaveras into a wide array of characters from the gang of Super Mario Bros. to Frida to Bart Simpson to the cast of Star Wars and Wizard of Oz to Johnny Cash and many more. Where did this fusion stem from and how important is this blending of culturas to you?
My calaveras originally grew from my inspiration from Jose Guadalupe Posada’s work. I really enjoyed his work and particularly the many skeletons that he created. Some of my calaveras are a modern take on the calaveras he created about people and characters from his time. The difference is that our time is filled with tons of popular culture from video games, movies, cartoons, and other things that weren’t around back in his time. I am both influenced by popular culture and by the Mexican culture that I grew up with so the blending of both cultures came very easily to me. It’s important for me for a bit of my heritage to show in my work so the calaveras are an important representation of Mexican culture, amongst many other meanings that the calaveras have for me.

Tell our readers something they would never know about you, Jose…

My favorite TV show of all time is The Simpsons.

Your work has been labeled and has fallen into the unaccredited category of “Geek Art.” How do you view that generalization?

I don’t have any problem with that, in fact a lot of my art reflects my own “geekiness” and my love for many things that are part of popular culture. I grew up watching a lot of cartoons and being a fan of many shows has influenced my artwork.

How do you see your artwork helping people to “Be proud” and “No te rajes!”?

Well, the “Be proud” is a saying related to the Mis Nopales T-Shirts that I created with my brother, as most were inspired by our Mexican heritage. It was one of our goals for people to be proud wearing our T-Shirts as many of them related to aspects of our Mexican culture and were done at a time when there weren’t many T-Shirts out there that reflected this, at least from a comedic point of view, as a lot of our designs were based on the humor of growing up Mexican. “No Te Rajes” however is something that I use to inspire myself and is an important classic Mexican saying that essentially means, “Don’t back down/Don’t give up.” I didn’t actually explore my own personal artwork as much until I was 28 and was very nervous when I decided to take that leap and offer some of my artwork for sale. I didn’t know whether I was going to succeed or not but went ahead anyway and have been very fortunate since then. I think everyone at one point in their lives has to tell themselves, “No Te Rajes!”. Sometimes that is the only way we ever accomplish our goals. 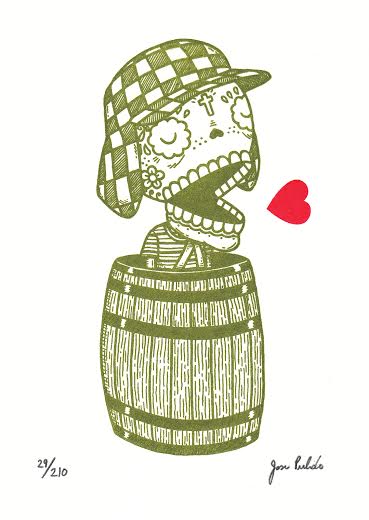 What do you have going on this spring/summer? Are you showing anywhere in LA? Travelling at all?

I don’t have any idea what I will be up to at the moment, hopefully I’ll be sleeping more and playing with my daughter a lot.

What are your goals for the next few years?

Starting with 2014, I am just setting a general goal to draw a lot more. I was really disappointed with my productivity in 2012 & 2013, so it is essential for me to surpass that productivity with new drawings, prints, t-shirts, and many more things. Having a kid now also motivates me to step things up and actually attain those goals.

How can our readers stay current with what you’ve got going on?

I regularly update any new artwork and products on my Facebook page, as well as any events I may be selling at, www.facebook.com/misnopalesart

I’m also getting hooked on Instagram so I post my work and process there as well, @misnopales