In the 2013 documentary film ‘Narco Cultura,’ director and photojournalist Shaul Schwarz explores the drug war and the subculture that continues to flourish from the popularity of the cartels and kingpins, particularly songs known as “narcocorridos” that feature lyrics about admired Mexican drug traffickers. In ‘Narco Cultura,’ Schwarz takes a deep look at the bands and songwriters who create this music, but also investigates how Mexican crime scene investigators and journalists function when another murder takes place in their backyard. ‘Narco Cultura’ was recently released on DVD and Blu-ray Feb. 25.

As a first time film director coming from a photography background, was the transition natural for you? You capture a lot of great images in the film, but was it a challenge to capture the narrative, especially since the drug war story has been told numerous times before? 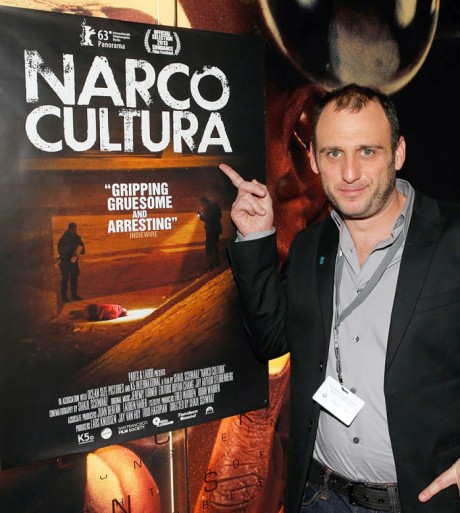 It’s been a long time in the making. I’ve covered this story for a bunch of magazines and publications. In ‘Narco Cultura,’ I wanted to tell this more complex, cultural story. I agree there have been a lot of films about the drug war, but they usually bring in experts and talking heads. I wanted to keep something raw with this film from my photojournalistic background. I wanted to take viewers to the frontlines and show them how this feels rather than educate them first. I got this ultimate access and got to shoot this very cinéma vérité. If I only took pictures, I don’t think I could’ve told the complexities of the stories and shown this stark kind of reality on both sides. For me it was the perfect storm. After two years of photography I was frustrated because – even though my pictures were getting published in magazines like National Geographic and Time and Newsweek – it never got to the bigger picture. It was always about the violence. I wanted to find out what this story meant to the millions of people on both sides of the border. I wanted to know what it meant to the hearts and minds of these people. I thought filmmaking was the perfect tool for that.

How were you able to get so many of your subjects to open up to you so much and tell you things on record that are so uninhibited?

It was about spending endless time in their nature and complex worlds. For every one thing that worked, there were 10 things that didn’t. We kept coming back and acting like a fly on the wall. We tried to stay very small. We asked hard questions, but we never asked questions trying to pin murders on people. We weren’t after that. I’d get killed if I did that. That wasn’t what I was looking for. I was looking for feeling. When people start trusting you and see that you’re putting your neck on the line and really care, I think you start gathering the fruit of [your labor]. We really felt like part of the story. I spent almost five years covering this story.

One of the most powerful scenes in the film – and I don’t think you actually capture it yourself, but correct me if I’m wrong – is of a mother who unapologetically screams out in front of the media when she finds out her son has been murdered. Is that something you found online? How did you come across that video?

That’s a great question. No one has ever asked me about that before. I worked with a ton of local journalists. I came back one day and one of the local photojournalists grabbed me and said, “I have to show you something I filmed two days ago.” I had been there for three years by that time and had felt so frustrated. You really feel like you want to scream. Sometimes nobody will say what everybody knows and it makes you want to scream. When [the local photojournalist] pushed play on that clip, I dropped in the middle of it and screamed everything my heart had been crying about. I know this mother lost her son in this horrific way, but I thought, “Finally, somebody screams!” The photojournalist said, “I knew you would want this. Here, it’s yours.” We always joke around that I shot the whole movie, but the one scene, which turns out to be the strongest of the film, is the one I didn’t shoot.

What does the U.S. lose in terms of news coverage when stories cross the border from Mexico? I know Mexican newspapers will print more brutal images than publications in the U.S., but what else are we not getting? What stories are not translating over well?

I think in general it’s an ongoing problem that people toss away. I mean, even the banner we’ve given this war is not true: The Mexican Drug War. Why is it not the Mexican/American Drug War? Billions of dollars come from the U.S. Weapons come from the U.S. We’re all involved in this but we don’t get the coverage. Don’t get me wrong, I have a lot of great colleagues and I don’t want to sound like this pretentious person that invented something new, but people are tired of it. Do we need to deny this and stick our heads in the sand? If you do, don’t blame the kids for seeing the [drug cartels] like Robin Hood. It’s not a left or right issue. It goes across the board. That bothers me. I don’t think we can afford that.

Where do you think the head of the snake begins in this drug war? I mean, I know you have the drugs cartels themselves, but everything is so connected, it’s hard to find where things start and end.

It’s a cycle! Maybe it’s not the cartels. The cartels are the providers. I don’t agree with the Mexican president on much, but I will quote him and say, “It’s not easy being the neighbor to the biggest drug addict in the world.” That’s why I say that we are in it together. The root of the problem is in the demand, but you can’t really change that overnight. If you pretend you can do that, then you’ll certainly fail.

So, in your opinion, would legalizing drugs be an option to break down demand?

I definitely think it’s something we should talk about more. I don’t think it’s the sole solution, but I think it’s a very important part of it. I think we have to be careful what we do in the name of the drug war, which harms other things. I mean, we spend billions of dollars on the border. Does that influence the price of drugs? You don’t have to be a great economist to figure out that if you make a product much harder to get, it will be more expensive. So, the Border Patrol is going to get a bigger budget and the Mexican Federales and military are going to get more aid. It’s a vicious cycle. I mean, don’t get me wrong, I’m not advocating that we just sit back and give up, but I want to do something more than just pretend we’re doing something now that is making a difference. These kids are going to keep singing [the drug cartel’s] songs if we keep pretending.

What was going on in your mind the first time you heard a narcocorrido and realized what these Mexican citizens were actually singing about?

The first time I heard one was back in 2010. I woke up in Tijuana and covered two murder scenes. That afternoon I heard the crowd singing a song about someone getting their head cut off. I was angry. I was pissed. I thought it was so ignorant. I knew about [narcocorridos] in theory, but I had never heard one. It’s one thing to know something, but it’s another thing to experience it. I was very pissed, but as I started spending time with the band, I also understood that 99 percent of these Mexican kids were in search of identity. They don’t connect to rap or hip-hop music. They’re searching for their roots. The reality is, those roots aren’t Pancho Villa anymore. Those roots are Chapo Guzman. So, I understood they were a product of it. But, yeah, the first time I heard a narcocorrido, it really rubbed me the wrong way. I wanted to understand why they felt that way and act that way. I think I do understand more. I wish we could change that.