Taking advantage of the U.S. Congress’ request to see more minority-owned networks on television, filmmaker Robert Rodriguez jumped at the opportunity to apply for a TV station and create a channel for an audience he felt has always been underrepresented. With El Rey, an English-language network targeting Hispanic viewers, Rodriguez sets his sights on a demographic looking for something authentic and cool featuring characters that represent them as Latino Americans. His first attempt to bring that to his audience is with the new TV show ‘From Dusk Till Dawn: The Series.’ Originally a 1996 film starring George Clooney and Salma Hayek, Rodriguez has redesigned and expanded the narrative for the small screen.

During the 2014 South by Southwest Film Festival, I caught up with Rodriguez and talked to him about what he hopes will result from a new network like El Rey and why he thinks a cult movie like ‘From Dusk Till Dawn’ was the best project to kick-start the network’s efforts.

If you have Comcast, DirectTV or Time Warner Cable, you can catch new episodes of ‘From Dusk Till Dawn: The Series’ on El Rey every Tuesday at 8 pm CT.

What did you see was missing from the TV landscape that you thought a network like El Rey could fill the void?

Well, the opportunity came up to create an entertainment network that had a focus on millennials and the growing population of Hispanic viewers, like my kids. I thought, “My kids don’t have anything that represents who they are in this country.” They don’t watch Spanish television. They’re not really seeing themselves represented on the screen. That has been my mission over the years making films – films like “Spy Kids,” “From Dusk Till Dawn,” “Desperado,” “Machete,” “Sin City.” You don’t think of them as “Hispanic” films because everybody can watch them and enjoy them. Those who are Hispanic will go, “Oh, look, half the cast is Hispanic.” It’s really empowering for people, especially in a population that is growing so wide. Then, I just didn’t really see any cool networks with really curated content where people behind the networks have actually seen the shows they’re showing and are fans of them. If felt having a network built from the ground up with authenticity and a real focus was needed. 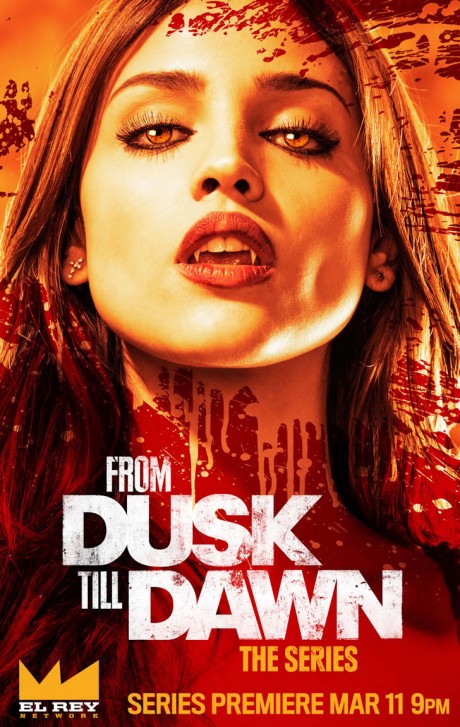 So, why revisit your film ‘From Dusk Till Dawn?’ Why not ‘The Faculty’ or ‘Desperado?’ What was it about this film that had you come back to it for a TV series?

I wanted to do a show nobody else could do like “From Dusk Till Dawn.” [Original “From Dusk Till Dawn” screenwriter] Quentin [Tarantino] and I controlled the rights, so nobody else could ever do the show. Also, “Walking Dead” really over-indexes Hispanic viewers. We thought horror and genre play really well across all lines. Everybody enjoys it. A lot of people who work with me on “Dusk Till Dawn” work on “Walking Dead” like [make up effects artist] Greg Nicotero and KNB Efx. So, we thought, “Let’s go reclaim our territory, the horror film, like ‘Dusk till Dawn,’ [but] in a show.” We thought it would be fantastic to do something like that with the new technology that has come out and do something that has the best characters on television. I mean, Quentin Tarantino writes the best characters out of anybody. To have him on TV for the first time is really amazing. People have come up to both of us over the years and asked us for more “Dusk Till Dawn” because it’s become such a cult classic over the last 18 years. The film always felt ripe. Also, I’ve had a painting from the last shot of [the 1996] movie in my office for 18 years – the pyramid. I’ve always wanted to go back and do something with it. Now, you’ll find out what all that’s about and the true mythology that surrounds it.

Do you think a network like El Rey would’ve been created sooner or later or was it only going to happen if the FCC and the Department of Justice came in like they did and demand for there to be more diversity on cable TV?

I don’t know who would’ve done it. I don’t know if I would’ve done it if that original opportunity didn’t come up. I went up for the network when they offered it, but pretty quickly when I put together this idea for El Rey, me and my partners thought, “You know, if we don’t get this channel, we should go out and do this anyway.” It’s easy to do and it’s needed. I think we would’ve done it anyway even if we didn’t go that route. We thought about going a different route completely. We could’ve had Univision invest in a new network. But the fact that Comcast stepped up and did it first really put a halo effect over the whole thing. The government recognized that something needed to be done. There was a compelling reason why this market needed to be served.

It’s taken someone like Oprah Winfrey four years to start making any money with her new network, OWN. Just last year she started making money when she hired Tyler Perry to create two new exclusive shows for her network. It didn’t take you as long to realize that’s what you needed for El Rey. Is that the key to making a new network like this successful – exclusive content?

Original content, yeah, but even your curated content [is important]. If people trust your opinion and you show them everything that is cool, they’ll go to you to watch anything you have, especially if you have that authenticity. A lot of networks don’t have that.