Power pop has been driven by white males, championing the anti-masculine, adolescent aesthetic—take Rivers Cuomo from Weezer as an obvious example: English major from Harvard takes a pipe dream to LA, wearing his wayfarer prescriptions and sweater vests so squarely it’s like he’s satirizing himself; sometimes (meaning Pinkerton), Cuomo and his predecessive and successive kin provide an earnest representation of how angst makes a caricature of itself, how we become caricatures of ourselves. This is important. That said, Power Pop’s has a history of making singles, standardized, canned verse-chorus-verse-breakdown-chorus-chorus, where even in their three minutes become gruelingly obvious. But what if it only lasted 45 seconds? 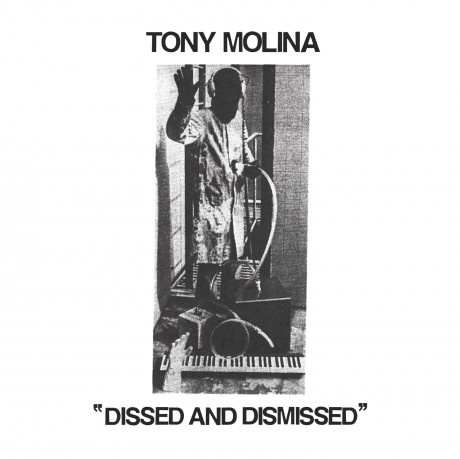 Dissed and Dismissed, Tony Molina’s solo debut, is 11 minutes where Power Pop is ground to its amateurish essence: feedback, pentatonics, riffs like middle school garage practice, lyrics without frills or political commitment, but trying—and isn’t that so fucking punk? Molina’s been active in the Bay’s hardcore scene since 2002, playing in Dystrophy, Ovens, Lifetime Problems, Violent Change—his hands in a myriad other projects. Despite this experience, that he’s able to sustain a fresh, trying sound is a miracle in a scene infamous for disillusion or selling out.

And this is not to say Molina lacks technique! His brevity recalls Guided By Voices’ poignancy (which Molina pays homage to in “Wondering Boy Poet”) and the immediacy of the Minutemen (but let’s replace the jazz influence with the power pop) and the lol-whatever of Black Flag. “I got to leave this town / cause all my friends they like me more when I am not around,” you overhear from your boyfriend’s ear buds, and then he plays  it on his Yamaha F-355, and he is so proud. And you tell him he should start a band, and he does (to your eventual dismay) — or, the lines of the album’s opening track, “Nowhere to Go”, which is, in two words: stuffy, fuzzy. The riff leads into the next, too quick to notice you’re listening.

And then, in the middle of the album, a refrain; a little acoustic, and, ironically, the title to this refrain is “Sick Ass Riff”. The album picks up again, mirroring the lazy melody and pentatonic ups and downs from the opening track in “The Way Things Are”, and even in the closing track, “Walk Away” — each led in and out by solos played like little victories, points of bright difference to accompany Tony Molina’s catchy monotone. And in the midst of this, a Guided By Voices cover, “Wondering Boy Poet”: the one song your boyfriend plays that you so much you ask if he wrote it… and, hanging his head, he tells you he didn’t.

You ever listen to a song and hate most of it, except for the first 20 seconds, or the last minute, or the introduction, or maybe just the breakdown? Dissed and Dismissed is a collection of these moments, played short enough to be surprising again. To the punk world it says, ‘stop taking yourself so damn seriously’; to the power pop scene it says, ‘shut the hell up’; and to anyone willing to listen, it says ‘I feel that, dude.’