With your headlights off, you do circles in a Buick Roadmaster around a beach where there is a tint of sepia or film-grain in view, and the sun shimmers on the water like crumpled paper. It is about to be night time, evening. On a whim, you have the windshield wipers on and keeping pace like a kick drum; the tires are heavy on the gravel, smooth-riding; you get the sensation of hovering as the engine drones. Something groovy plays on the radio, like from an 8-track — think Lush, as relaxed as Sonic Youth, but very aware you are riding beach-side, and very aware there are sunglasses hanging from your t-shirt collar. You are very, very sleepy.

The September Girls hail from Dublin, a five-piece group who reverberate the sounds of 60s beach pop-psychedelia as they’ve influenced the shoegaze, post-punk movements of the early 1990’s and culminate in a nostalgia unmistakeably 2014. Reverb, groovy drums, and buzzsaw melodies, layering in feedback for textures that leave harmonies distant like music in a dream — you ask yourself, like an echo, like trying to relay this dream to a friend: what were they saying? The September Girls’ debut album Cursing the Sea is precisely this way: a dream very aware of its dreaminess, looping in on itself, strung together by forgettable questions asked at different tempos, who, by the grace of a sonic signature (distorted and nostalgic and familiar, but somehow new), beg themselves to be relayed and answered. 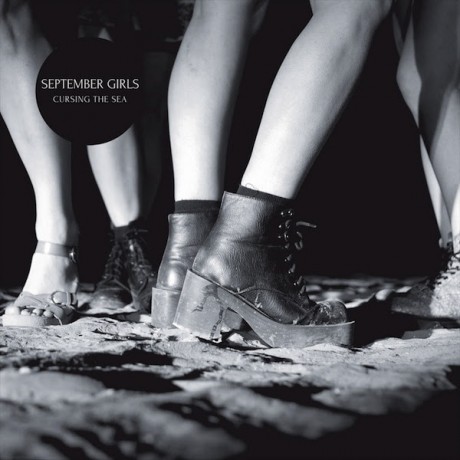 The album opens with the eponymous “Cursing the Sea”, a brief and sunny track that seems thinner and thinner as the album leads into deeper compositions. There is an evident disparity of ‘depth’ between the beginning of the album in songs like “Heartbeats”, compact in distortion and typical in structure, and later songs like “Sister”, whose vocals are so slow and spacious and fuzzy, it’s like they’re being sung from an old church microphone in a cathedral, blurring together the verse, chorus and so on.

But even as the music expands in depth and darkens in tone, the September Girls manage to keep it danceable. “Green Eyed”, for example, opens with a dissonant, twangy guitar which, twelve seconds in, is welcomed by the dredging boom of bass and drum, turning the mood from horror film into ritual dance, like dark-wave, almost like The Cure. But this is not the defining aspect of the September Girls’ music. What gives them their hook and links their music, more than anything else, is the harmonies. I never/saw it that way, is sung on “Another Love Song”, with a hum and an ahh echoing over, tuned to such longing that makes clear, in spite of the literal distance of the voices, that they are singing about heartbreak.

Overall, the album can be hard to pin down as the dream in the harmonies battle the dance of the bass and drum. At times, in tracks like “Cursing the Sea” and “Money”, they share the songspace happily, and the music is ear-filling and compelling. However, if we’re to presume, as I have, that the September Girls’ aesthetic is driven by the dream and that this feeling of ‘dreaming’ which sticks the songs to my tongue is their vital attribute, then, perhaps, it’d behoove them to focus on creating more spacious tracks, sacrificing the compactness of the drum and bass, letting them loose and wide to follow the vocal suit and create even deeper textures.

Returning to the metaphor I began with, trying to illustrate the feel of this album, the place where it seemed to belong, I want so badly to step out of the Roadmaster and swim — yes, listening to the waves from afar and how they mingle with the windshield wiper and the gravel and the muffler is nice… but I feel protected in the vehicle, held back. I want to touch the sound lively, dip my hands in the water, as opposed to feeling the leftover reverberating of the engine in my palms on the steering wheel.

But desiring a deepening of the sensations at play in Cursing the Sea is only a testament to its allure, and it will be interesting to see how the September Girls evolve come a sophomore effort.