A couple of days ago my lover and I were hungry rummaging through my roommates’ refrigerator space in search of ingredients to make the dinner I promised would be a ‘culinary achievement’ because ‘I am an amazing cook,’ which are two phrases shoving their proverbial feet in their proverbial mouths as we set down queso chihuahua, mushrooms, generic marinara sauce, long grain rice, and onions all of which, admittedly, looked past their prime. It did not help me, either, when checking the drawer for utensils and led to finding a Chinese spoon and a fork and one of those porous, clawlike salad spoons.

It is at this point, as much in an effort to set the mood as to distract my lover from the daunt of our coming dinner, when I first listened to Things Get Better, a debut album by Canadian Native — as in, First-Nation-aboriginal-legacy kind of native — artist Eden Fine Day in collaboration with producer Jesse Gander (Celebration Rock by Japandroids). 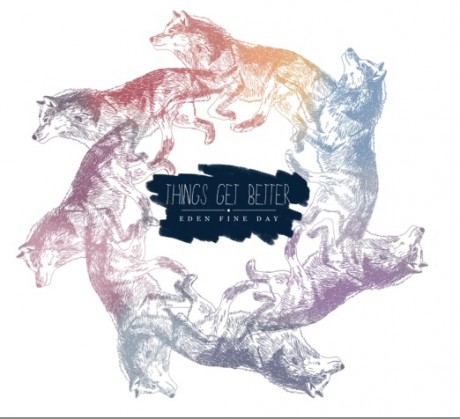 Things Get Better is as dramatic and intimate and dreamy as the sighing-to-hum-in-to-strumming which opens “Alone Again” as it will be the rest of the album, and when Fine Day’s melody enters, reverberating sweet and soft and uncomplicated and eerily reminiscent of Dolores O’Riordan, we understand: it is prom night, it is the last dance, and you may or may not find someone to dance with. As “Alone Again” builds, it is not difficult to imagine credits rolling on a 90s movie over a teen-ish couple waltzing cautiously and closely over the slick, disco lit wood-like of a gymnasium floor.

And all the while, my lover is chopping onions, looking with a face like they want me to change the music (“this is too cheesy,” those eyes say) and I am trying hard not to pull them into slow dance while the onions burn. She’s right, though, Fine Day’s lyrics on Things Get Better are consistently vague, whether referencing NDN oppression or saudade, and struggle to be taken serious in the cinematics of her dreamy sonic identity — “when you meet someone who interests you / it’s interesting / that’s how I found you / interesting/and it doesn’t happen often,” Fine Day sings on “Strangers”, a country-toned pop song sung a serious-ernest-Dolores O’Riordan tone which supersedes the naivety of her lyricism. But, somehow — and maybe it’s the grace of Fine Day’s singer-songwriter image, the image of her with pen and parchment paper taking note of her chord strumming in a bedroom late at night— I never think she’s lying.

Sound-for-sound, Things Get Better suffers from dysphoria. While at its core it is dramatic and intimate and dreamy and cinematic and singer-songwriter, the album has a tendency to drift into strange arrangements, the banjo on “Damaged” or horns layered over reverb-back-vocals over symphonic strings on “Parent Teacher Day”, which detract from the simplicity of Fine Day’s voice. She does, however, embrace this simplicity, as well as shameless pop, in the eponymous track “Things Get Better,” which features lead-in vocals over a forward team of percussion and guitar, acoustic and electric — here, she lets go of the sighing and delay of her earlier vocals and tells a biography almost specific enough to contextualize its preceding songs: “caught up with strangers who wanted to die / and they inspired me to give it a try / but I survived / I thought things would get better / but first they got worse.” And, damn, that’s a good line for a hook:

I thought things would get better / but first they got worse

Such as the case as half-way through the album, my lover and I blackened onions into the pan like a second layer of teflon and spilled marinara all over my underwear and figured out that the cheese was far too old but decided to cook with it anyway and upon serving the meal our bowls were half reddish-cheesy rice and half pile of black mushroom-something. And, you know, it was pretty tasty. While Fine Day’s Things Get Better is certainly a work of someone who is in the works, the songs, in all their dramatics, can turn an apparently awful a dinner into, leaving us nodding and thinking I want another bowl of it.