On “The Goldbergs,” an ABC comedy series set in the ’80s, actress Hayley Orrantia, 19, plays Erica, the family’s oldest child and only daughter and easily the best dressed of the Goldberg clan. The show, which is based on the real life of creator Adam F. Goldberg, also stars Chicago-born comedian Jeff Garlin (TV’s “Curb Your Enthusiasm”) and Wendi McLendon-Covey (“Bridesmaids”).

During an interview with Orrantia, whose father’s side of the family comes from Chihuahua, we talked about some of the things she’s enjoyed experiencing on the show, especially since she was not born until the ’90s…not to mention the one piece of fashion from the ’80s she’ll never put on in her lifetime.

You were born in 1994. What was the most interesting part of going back to a decade like the 80s?

The fashion has definitely been a big thing for me and my character. I know the hair and makeup and wardrobe people on set really like working with me. They can have more fun with my character because she’s young and vibrant. Erica is a really popular and trendy girl, so that’s really been the most impactful thing for me on the show.

Is there an Erica Goldberg in creator Adam F. Goldberg’s real life and have you had the chance to meet her?

Actually, my character is based on Adam’s oldest brother, Eric Goldberg. They wanted to have more girls in [the cast], so he decided to make his older brother an older sister. Eric did come on set one week, but I, unfortunately, was not there. Hopefully, before the season is up, I’ll get a chance to meet him.

Was there something specific about the 80s that you found odd and can’t understand why it was ever popular?

For me, it comes back to fashion. I really don’t understand jelly shoes – those see-through, glittery, sandal-type things that girls wear. I cannot, for the life of me, understand why they were ever popular. But some of my friends have them because apparently they’re coming back in style, which I think is horrible. I like the music and everything, and the fashion isn’t that bad, but when it comes to those damn jelly shoes…

I read a blog the other day that said there were five fashion trends from the 1980s that apparently made a comeback in 2013. Jelly shoes, however, didn’t make the list, so we’ll have to look out for those now. Anyway, what I’d like to do is name those five fashion trends and have you tell me if you or your friends rocked any of these out last year, OK?

Sort of. I think they’ve started to make cooler patterns. Some of my friends have been wearing them a lot.

Absolutely. Those are very popular. All of my friends have them. I actually don’t have a pair, but I’ll probably be getting some soon. Those are definitely popular among me and my friends.

This is so lame, but for me, growing up, especially in middle school, I always wanted to dress like a rainbow –colored gothic kid. (Laughs) So, when I was younger, I thought that was the coolest thing ever. So, I actually have a lot of neon stuff. I try not to wear as much anymore, but I still have it in my closet.

Yeah, those are popular, too. My friends wear them. I wear them.

What do you wear now that probably won’t go over too well with a younger generation in, say, the year 2040?

(Laughs) I feel because it’s so popular now, it’ll be the Bohemian, hippie-style clothing where everything is baggy. I’m sure when we look back on it in 30 years, we’re going to be like, “We looked like homeless people.”

Personally, I don’t get why young girls wear granny glasses.

I don’t either. I think, for some reason, my generation right now is very into vintage anything – the whole hipster phase. So, I think that goes along with it. They’re like, “Oh, look, these are my grandma’s original glasses from high school.” I don’t know. 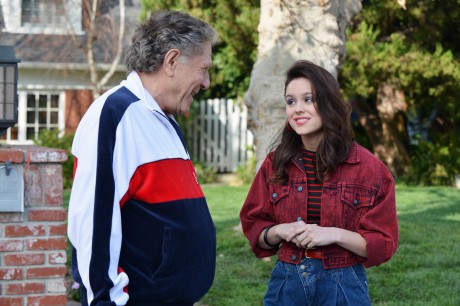 I, myself, am a child of the ’80s, so I have a special place in my heart for 80s movies even though I know a lot of them are really cheesy. Is there a movie or TV show you grew up with in the ’90s that you might be a little embarrassed to admit you liked now?

Oh, absolutely. I watched a lot of TV shows and movies on the Disney Channel. I remember the movie “Life-Size” with Tyra Banks and Lindsay Lohan. I actually just heard they are doing a remake of that. I got excited about it because me and my friends loved that movie growing up.

In one of your recent tweets you say that you were meant to be born in the ’70s because of the music you like. So, if you could pick any decade to live in, would it be the ’70s?

I guess it would depend. I mean, ’70s music is so fun. Me and my mom have so much fun when we hear that music. We always have ’70s parties with friends back home in Texas.

The show is narrated by Patton Oswald. Have you gotten a chance to meet him yet?

I did! I met him at a table read for an early episode. I only met him for a brief moment, but he was a really cool guy. I think his voice is perfect for the role. I’ve seen his other stuff before and I think he’s a great actor. I’m happy to have him on the show.

“The Goldbergs” airs Tuesdays on ABC at 8 p.m. CT.