I love cake. I love whiskey. I love excuses to put on rhinestone belts and red silk bow ties and eat for free. For all these reasons, I loved Cake & Whiskey.

The idea behind Cake & Whiskey is simple: drink some whiskey, eat some cake, have a good time. Founder Carlo Garcia was inspired after a Facebook status update (“All I want to do is eat cake and  whiskey all the time.”) garnered a lot of enthusiastic replies. He reached out to some venues, bakeries, and whiskey suppliers, and the Cake & Whiskey supper club was born. Their inaugural event this past November was speakeasy-themed. I scored an invite to their holiday party: “Whiskey, FrankinCake, and Myrhh.

This was pre-Polar Vortex, in the last quiet days of 2013; after I’d baked for 6 hours straight on Christmas Eve, but before I fell asleep on the living room rug before midnight on New Years. The lull between winter holidays is a special time, or so I like to think. We live in a culture of over-workers, but nobody reasonably expects to get anything done during these days. It’s five days of breathing space where you have every right to wear sweatpants and watch the worst Netflix has to offer. 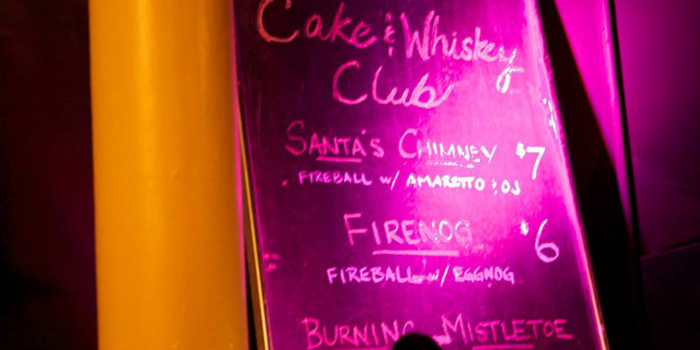 It’s a great time for no-sweat boozy holiday parties, and Whiskey & Cake’s “Whiskey, FrankinCake, and Myrrh” did not disappoint. The event was sponsored by Fireball Whiskey, a cinnamon-flavored whiskey, and it was the key ingredient in all the featured cocktails. Though I’m not a fan of flavored whiskey, Fireball isn’t bad, especially straight. It’s got a nice, lasting burn that makes it worth the sweetness. I was a little confused that the Cake & Whiskey mixologists were mixing it with yet more sugary things, when it was already straddling the line of alcocandy. Santa’s Chimney was a mix of 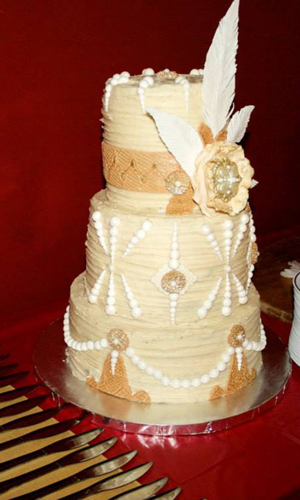 Fireball with amaretto and orange juice; Firenog was a spiked eggnog; and the Burning Mistletoe had grenadine and ginger ale. They were decent drinks, but a little too sweet for my sensibilities.

Possibly in anticipation of their next event, “Hunka Hunka Bourbon Love” (Cake & Whiskey loves its puns), there was a tasting of Kentucky bourbons in an old freight elevator: Eagle Rare, Buffalo Trace, and Blanton’s. All originating from the same distillery, this was a nice spread to give people an idea of differing qualities of bourbon. Eagle Rare, the cheapest of the three, is a couple steps up from Evan Williams or Jim Beam on the taste scale: too good to mix, but fiery enough on the palate to necessitate either a chaser or some ice cubes to cut it. Blanton’s, on the other hand, I could sip until a doctor pried it from my cold, dead, jaundiced hands.

Speaking of things I could consume until I died from them, the cake was truly amazing. Made by Maddiebird Bakery, it was chocolate with chai-spice frosting. It was like they knew I was coming or something, and made a cake that hit all my sweetspots. The crumb was moist and not too heavy, the buttercream frosting fluffy and light, flavored with hints of cardamom and cinnamon. All of my notes are variations of the words “fucking delicious” and strings of keysmashes. 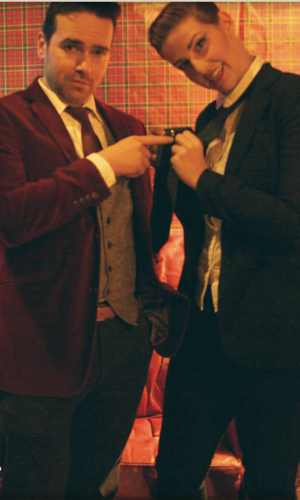 One of the best parts of the event was how relaxed and friendly it was. For one thing: there was 100% fewer ironically ugly sweaters than I was expecting, particularly for an event in Wicker Park. The atmosphere was one of relaxed elegance. Carlo Garcia, Cake & Whiskey’s founder, was dressed in a maroon velvet blazer and waistcoat. My bow tie (which took me an hour, several Youtube videos, and possibly bending the laws of physics to successfully knot) garnered a fair amount of complimentary attention, but was certainly not out of place. The Den Theater itself was mismatched chic, with leather couches and wooden tables that looked like they’d been passed down from your favorite eccentric rich uncle. In the barroom, the speakers were pumping out Sam Cooke and Frank Sinatra. In the other room, local bands The Unswept and Cpt. Captain performed sets of upbeat, poppy tunes.

Carlo Garcia, when I caught up with him, mentioned being inspired by the social clubs of the 19th and early 20th century.  “Even in modern dress of that time period there was a certain classiness… We’re very casual with our appearance now, but I think giving people the opportunity to dress up a little bit, it makes people feel classy. I want [Cake & Whiskey] to have an element of going out to something special.”

He added, “I mostly want people to feel comfortable,” which in my opinion is the greatest strength of Cake & Whiskey. Its elegance is effortless and unrestrictive. Unlike many of the food events that I’ve been to in Chicago, Cake & Whiskey struck the right note of upscale and down-to-earth, DIY with aspirational high heels. It’s pleasure for pleasure’s sake, as reflected in the club’s brilliant motto: “Have your cake and drink it, too.” 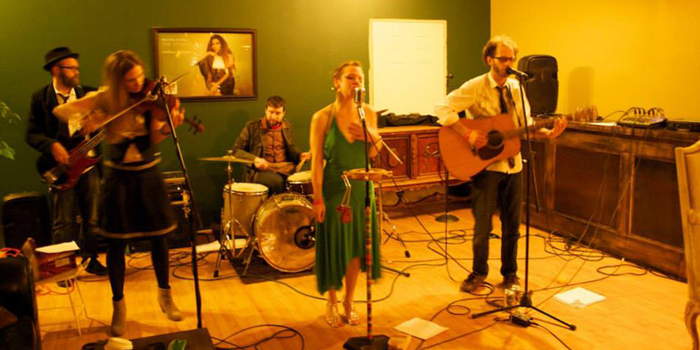 Cake & Whiskey’s next event, “Hunka Hunka Bourbon Love”, is already sold out, so I’d recommend getting your tickets for February’s “Sadie Cakins” at the Punch House as soon as possible. And for the special person in your life that you totally forgot to buy a Christmas present for, Cake & Whiskey offers annual memberships.

Want to know more? You can check out Cake & Whiskey’s website, Facebook page, or listen to my interview with Carlo Garcia below, where we talk whiskey, cake, and whether or not I should bring home the 6-foot tall cardboard dragon donated by Fireball.

A Chat with Carlo