I don’t know about you, but aside from my foray to Cake and Whiskey, my holidays were pretty blah. I spent a few hours of Christmas with friends, and then fell asleep on the floor at 11:30 on New Year’s. My fatigue was a little perplexing; I haven’t missed midnight on January 1 since I was a kid.

The answer revealed itself the next night, when my entire torso felt like someone had run it over with a foodie’s grocery cart in the Whole Foods parking lot. My temperature crept into the hundreds. It hurt to breathe. It hurt to do pretty much anything. I spent the next three days on the couch, wrapped in my Doctor Who throw blanket and trying not to cough on my roommates. 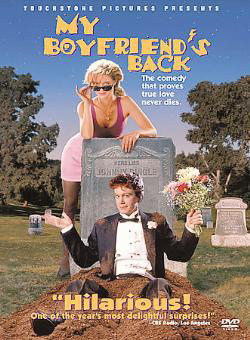 Like Lazarus, however, I lurched from my early grave. (Or, if you prefer a secular simile, like Johnny Dingle in the 1993 zombie rom-com, My Boyfriend’s Back. Tagline: “Johnny would give an arm and a leg to date Missy. Well, maybe just an arm.”)

Why would I expose myself to the hazards of a Chicago winter while still feverish, miserable, and dripping snot? I was answering the inexorable summons of my Medieval Times Groupon.

A lot of the folks I know from Chicagoland have been to Medieval Times at least once in their lives, generally as children. (And as far as I saw, we were the only adults there without any accompanying minors.) The Schaumburg franchise opened in 1991 and has been an institution ever since.

One of my roommate’s friends found the groupon: half-price admission, which included the full meal, all the Pepsi products you could drink, and the floor show. My roommate Zoë coordinated it with a group of her friends, about half of whom I’d never met. We set a post-holiday date, when all of us would be sick of hanging out with our families or being reminded that we couldn’t hang out with our families because of the price of airfare.

By the day we’d agreed to make the trip, I’d been wearing my Doctor Who blanket toga for nearly 72 hours straight. I’d barely slept in four days, kept awake by fever dreams and coughing fits and cold medicine. I put on approximately eight layers of clothing, swallowed a couple doses of cold medicine, and figured that if anybody noticed I hadn’t showered in a week, I’d tell them it was for narrative veracity. It wasn’t like Europeans in the Middle Ages were particularly familiar with shampoo either.

There are three active ingredients in Dayquil and its generic equivalents: phenylephrine (a decongestant), acetaminophen (an analgesic and fever reducer), and dextromethorphan (a cough suppressant). Nyquil is the same, with the addition of an antihistamine, doxylamine succinate, to induce sleep. Phenylephrine is a common replacement for pseudoephedrine, which is one of the ingredients that can be used to make meth, but has similar side effects, namely: restlessness, anxiety, dizziness and nervousness. Luckily, this is balanced out by the dextromethorphan, which in high enough doses, can cause hallucinogenic dissociative states. (You may have heard it as “robo-tripping.”) Acetaminophen has been in the news recently, after ProPublica and This American Life released a joint-report called “Use Only As Directed”. The report pointed out the narrow safety margin of acetaminophen, and that a slight change in dosage can mean the difference between curing a headache and overdosing and causing permanent liver damage.

I didn’t really think of any of that when herded into Ye Olde Foyer with a hundred other people. A few members of my group set to steadily getting drunk, while the other half cracked jokes and squealed over the tiny children wearing princess gowns and plastic armor. I felt cold and congested and sleep deprived and unsure if I should have left my Doctor Who blanket. What I thought was, I really want a hot toddy.

Have I written about hot toddies in this column before?  They’re magical. Whiskey, hot water, honey and lemon. You can add tea if you want to be fancy, or ginger if you’d like to pretend it’s medicinal. They’re the perfect winter drink. I had a few moments of doubt before deciding, fuck it, one drink won’t be too bad.

“Right idea?” Zoë asked, when I came back from the bar. She’d witnessed my not-so-internal debate.

“Right idea,” I agreed. And the toddy (overpriced but strong) slid soothingly down my throat, warmed my chest, and loosened a few clumps of mucous in my bronchial tubes, which I surreptitiously hacked into my cocktail napkin.

But when I finished the drink, I realized something. I had eyeballs. There were gooey spheres of gelatinous materials that were attached to my brain, and they interpreted a select portion of the universe’s electromagnetic radiation known as the visible light spectrum. And there were rods and cones involved somehow, though I wasn’t really sure how. (I’m still not.)

Also: everyone around me was wearing paper crowns, as if this were completely normal.

“Zoë,” I whispered during the knighting ceremony. “I’m really high. This was the wrong idea.”

“Are you gonna be okay?” she asked.

I nodded. I was a professional writer. I would power through. For the sake of the story.

I handed Zoë my phone. “I need you to take notes for me,” I told her. “I don’t think I can move my fingers right.”

Zoë typed in: There seems to be confusion regarding tickets but Zoë looks truly stunning in her paper crown.

(I’m sure this is true. I think I was wearing my paper crown, but luckily, nobody thought to gather blackmail material.)

Together with the rest of the sea of humanity, we were herded into the stadium. It looked like a repurposed hockey rink, with a large oval floor of sawdust surrounded by risers. We were seated in the black and white section, sitting in a long row of seats, with faux-metal plates and beer steins set before us. Our menu was printed on the napkin, but there seemed to be a few wet naps per person. “Made in America!” they proclaimed, because AMERICA.

There was no silverware. Spoons and forks weren’t invented until the Renaissance, I guess, and Medieval Times is nothing if not a paragon of authenticity.

“You only get one napkin, so treat it nice,” our server told us. Her name was Brielle, and she said to call her “wench” because it was easier. She filled our fake beer steins with Pepsi. I hadn’t had Pepsi since I was in middle school, and the taste was just as gross as I remembered.

“My scalp feels weird,” I told Zoë. She dutifully made a note of it. She also recorded a few of my other observations: “These lights are AWESOME.” And: “Every time I take my glasses off I see weird glowing things.”

There was some kind of vague storyline for the show, though for the life of me I couldn’t repeat what it was. It involved some villainous-looking guy wearing black leather. I think he wore an eyepatch? The king and his daughter, Princess Something Or Other, sat in a high box, occasionally coming down to deal with the knights, or into the risers to make nice with us plebes.

Our knight was the Black and White Knight, no further name given. The Black and White knight was a warrior priest, or so the announcer/courtier/narrator told us us. He had wavy, shoulder-length hair. In fact, most of the knights had shoulder-length hair. I couldn’t help but wonder where they recruited these knights. Did they start as squires and get promoted when their hair grows past their chin?

Whatever. Wench Brielle brought us garlic bread and a thin reddish soup, listed as “Dragon Blood” on the napkin/menu. It tasted like watery tomato bisque, and we drank it straight from the bowl while watching a dressage demonstration.

If you’ve never seen dressage, it’s one of those rare phenomena that manages to be really interesting and really boring at the same time. It takes a huge amount of skill, one rider working with one horse to work out a series of commands that are communicated so subtly, the audience members can’t see them. But what it comes down to is: dancing horses. Dancing horses and terrible music that goes on for too long. 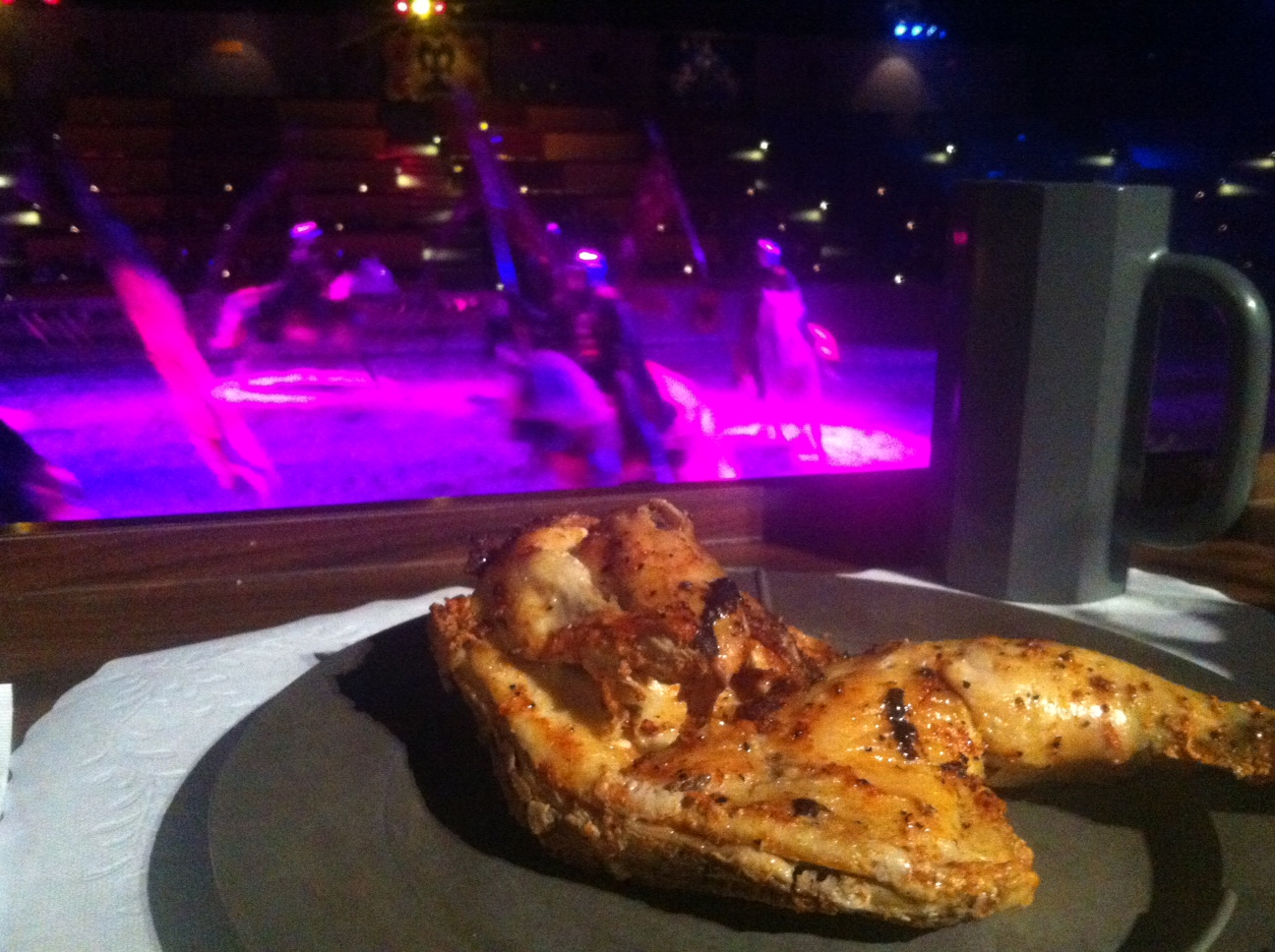 After, there was a falconry demonstration. It was AMAZING. There was a very big bird and it flew all over the room and, to my knowledge, did not shit on anyone. Then some teenage squires shoveled all the horse manure out of the ring, and the various tests of skill began. There was a relay test (on horseback!) and a thing where each knight tried to spear some tiny metal hoops on a lance (still on horseback!). We cheered on our warrior priest, especially when he paused to toss plastic roses to the crowd. (He didn’t toss them to our row. I was convinced that everyone knew we got half-price coupons, but he was probably targeting the under-10 members of the audience, rather than the row of millennial hipster-types.)

Brielle and the rest of the wenches (what’s a male wench? A wonk?) brought out the rest of the food before the jousting began, during another sort-of-boring horse dance. We each received half a roasted chicken (surprisingly good), half a baked potato, “dragon claw ribs” (disappointing; I’ve been spoiled for good ribs in Chicago), and an “apple pie croissant.” I can’t even really parse that desert. I’m pretty sure I enjoyed it but honestly can’t picture what it looked like.

Jousting is great entertainment. Two dudes, two horses, two ten foot long poles that dramatically break. Nobody was knocked off their horse, rather they seemed to make a very conscious decision to fall. I understand this, having fallen off my share of horses. You generally know it’s going to happen before it does and get to watch the ground leisurely rush up to meet you.

Our Black and White Knight did alright. Well enough to face the Green Knight, who was in the lead, in combat. I was really hoping for a melee, because eight dudes kicking the crap out of each other sounded like perfect dinner entertainment. Sadly, it was all one-on-one, mano a mano.

If I thought the lights were dramatic before, that was nothing compared to the combat show. First, a net descended, blocking the audience from the ring and the company from inevitable liability suits. Sparks flew off the swords. It was obviously choreographed, but at least it was well-choreographed, better than some of the other fights. Our knight drew first fake blood but lost in the end.

“Where is your god now, infidel!” I didn’t cry to the fallen warrior priest but retrospectively wish I had. I immediately switched allegiance to the Green Knight, who unfortunately lost to the Red and Yellow knight which, ugh. Dude was dressed like a Happy Meal. Disappointing.

Remember the villainous guy I mentioned earlier? He reappeared and demanded to marry the princess. “Curse your sudden but inevitable betrayal!” the king didn’t shout, because Firefly references would probably be have been inappropriate. Instead, he faced off with the Happy Meal knight, and inevitably lost, because Good always triumphs over Black Leather and Eyepatches. 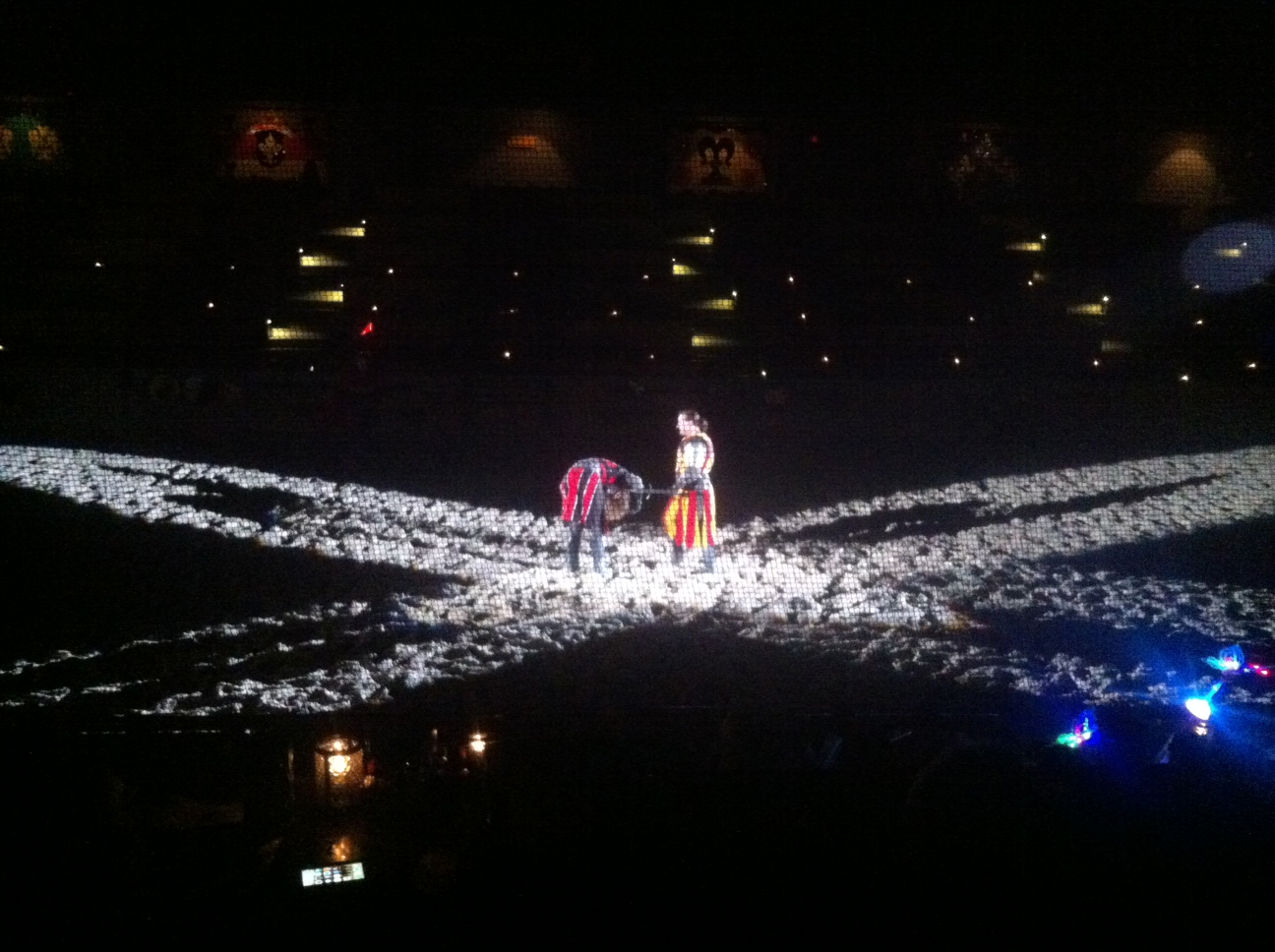 When we got home, Zoë and I decided to watch A Knight’s Tale, having whet our appetites for anachronistic portrayals of Medieval Europe. I managed to make it to the end (it’s a terrible movie, but has, by far, the best after-credits sequence of any movie. Even better than Marvel superhero movies. It involves farting. That’s actually it, the entire sequence: just the supporting characters sitting around in a circle, farting. It’s brilliant.) I fell asleep, telling myself I’d write up the column the next day.

Three weeks later, here we are.

If there’s a moral here, it’s “For the love of all that’s holy, never pit your liver against cold medicine and booze.” Not even for a column. That can be my New Year’s resolution.