It turns out that artists have enjoyed screwing with people for millennia. Mural painters in Greece and Rome depicted windows and rooms on otherwise empty rooms to give illusory space to an abode. As one story goes, the artist Zeuxis painted grapes so realistic that birds flew down to peck at them. His rival Parrahasios bested him though: he invited Zeuxis to view his new painting, which appeared to be hidden behind a curtain. When Zeuxis attempted to push it aside, he discovered that the curtain was the painting. (LOLZ, PWNED BY FAKE CURTAINS.)

15th century Renaissance painters painted frescos of golden domes on flat ceilings, using forced perspective to create sham architecture. Later Renaissance painters used similar techniques to fool the viewer into seeing objects on flat space. In a manor house in Derbyshire, England, a violin and bow hang on a door; the door is real, the violin, bow and the metal peg from which it are all painted. (LOLZ, PWNED BY FAKE VIOLIN. They should totally put that in Downton Abbey.)

In the 19th century, illusionistic painting fell out of favor with critics, who decried it as imitating the most mundane aspects of life rather than transcending it. (One iconic trompe l’oeil painting by Pere Borrell del Caso depicts a young boy perched on the frame surrounding his canvas, looking for a chance to leap out of it. It’s titled Escapanda de la critica, or “Escaping Criticism.”) Despite critical scorn, the public still loved the sly trickery of trompe l’oeil paintings. They were beloved by the emerging middle class and bourgeoisie.

The “Art & Appetite” exhibit has a room dedicated solely to trompe l’oeil paintings. On one wall hangs For Sunday Dinner and Trophy of the Hunt by William Harnett. Side by the side, the paintings–of a plucked chicken and a dead rabbit–offer a sort of luminous realism. On another wall, though, hangs two paintings by De Scott Evans: Free Samples, Take One and The Irish Question.

Scott signed these paintings “S.S. David”, in an attempt to keep them separate from his career in genre paintings and portraits. Interestingly, his trompe l’oeil paintings have become far more popular since the artist’s death. 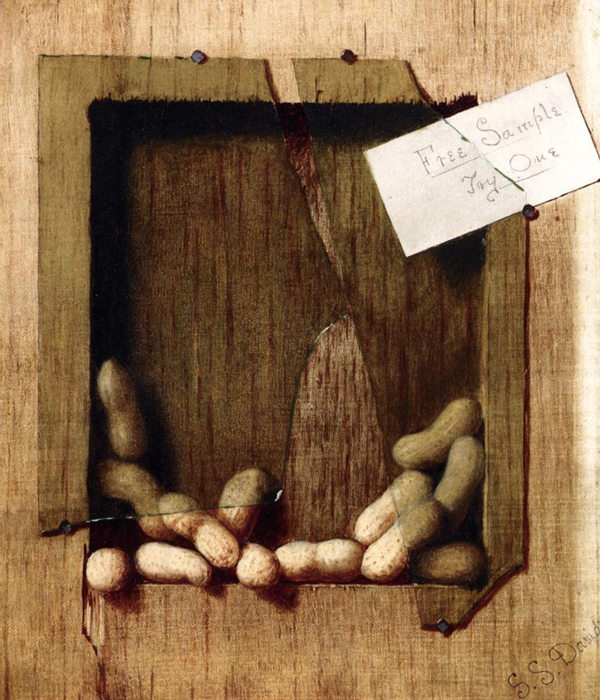 Both are extremely humble paintings of mundane objects. Unlike the Harnett paintings, Evans’ paintings have a subtle current of danger running through them. In Free Samples, Take One, a handful of peanuts are held behind a piece of broken glass. The canvas itself is painted all the way around, heightening the illusion that this is an actual container, and a piece of card with the title written on it is placed behind one of the broken pieces of glass.

The Irish Question is similarly painted to appear as a nicked and splintery piece of wood, and has another hand-written has been pinned to it. Two potatoes hang by a piece of thin twine, dangling over the edge.

The Art Institute’s commentary on the two paintings emphasizes the sly political innuendo of both paintings. Free Samples, it suggests, offers commentary on racialized politics in America, as symbolized by the peanuts encased in the broken glass. Peanuts were primarily grown in the South by sharecropping black families and were primarily eaten by the poor as a cheap source of protein. The racial connection seems like a bit of a stretch to me, particularly because the artist painted similar pictures with different nuts, such as almonds.

The Irish Question’s political commentary is a little less of a stretch. “The Irish Question” refers to the 19th century debate over Irish home rule, independent of the colonial rulers of the British Empire. The Great Famine–partially caused by a blight on the potato crop, though terrible and even racist trade decisions by the British were equally to blame–decimated Ireland’s population, with approximately one million Irish dying from starvation, malnutrition, and other ills, and another million emigrating. A huge number of Irish immigrated to America, making the Irish Question relevant to American political audiences.

But how are we meant to interpret Evans’ painting of the hanged potatoes? The tone seems ominous, if sort of humorous. You can sort of imagine it hanging in a 19th century bar, which often commissioned trompe l’oeil paintings, and the sort of brilliant commentary it might inspire. “Oh, I get it. They’re potatoes, because they’re Irish. And a bunch of them starved a few decades ago because all their potatoes shriveled up. And now they want political autonomy or something. Hilarious, right? Yeah, I’ll take another High Life.”

Is this meant as a condemnation of the demand for Irish independence? Does it highlight the dire circumstances that gave rise to nationalism? And what are we to make of this other painting of hanging apples? (LOLZ, PWNED BY FAKE APPLES.) Without context, the paintings offer questions without any resolution and keep the artist’s politics as a conundrum.