With the opening of the Art Institute’s new exhibit, “Art and Appetite: American Painting, Culture, and Cuisine”, I’ve decided to turn this column over to exploring a few of the pieces that are on display. I like art in the same way that I like food: my enthusiasm generally outweighs my ability for analysis. While I appreciate technical ability and skill, I think both art and food are capable of nourishing us in a variety of ways. The same questions arise: what does this dish or artwork make me feel? What story is being told? What will stay with me after I leave the table, or the gallery?

These are the impressions and the stories of a few artworks that caught my eye in the gallery. This won’t be an exhaustive list, or a particularly scholarly one. Probably not even a very geeky one, truth be told. 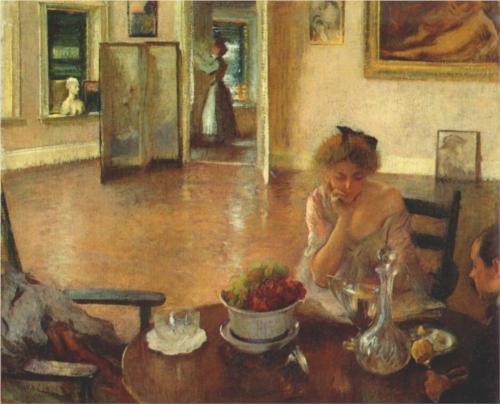 First up, we’re going to talk about The Breakfast Room, by Edmund Tarbell, and The Breakfast Tray by Elizabeth Paxton. (Pair with: dry toast, tea with milk but no sugar, an orange, and a side of indifference, or a hangover.)

A man and a woman sit together at a table.  The man is dressed, but the woman is not: her robe is falling off one shoulder, nearly exposing her breast. She is reading a newspaper, chin propped up on one hand, and he is holding a peeled orange that he’s impaled on a fork. He’s staring listlessly, either at the bowl of fruit in front of him, or the empty chair across the table. A coat’s been left there, suggesting the presence of another man. The room they’re in is large and mostly empty; there’s art on the walls (one painting isn’t hung, but rather propped up), a folding screen, a marble bust. In the blurred background, there’s another woman– presumably a maid, judging by her apron–ignoring and ignored by the others.

Tarbell was an American Impressionist painter. Many of his paintings are lush studies of Edwardian leisure: soft-focus women picnicking or boating or simply lost in thought. The Breakfast Room is different; the figures are almost incidental to the painting. What is mostly on display is the empty room, the diffuse morning light on the floor, and a sense of languor.

Hung on the same wall, though separated by a few other Impressionist paintings, Elizabeth Paxton’s The Breakfast Tray portrays the messy aftermath of a breakfast in bed. The bed is in disarray, sheets hanging over the pane and pillows still indented from the woman who sat propped up against them. A newspaper lies discarded on the floor, near a pair of cast-off high heels. The tray that the painting is named for sits on a carved wooden chair that’s been pulled up close to the bed. The light is even more present in this painting than in Tarbell’s, harsher; late morning with a bright sun slanting through windows.

This painting seemed very full to me, a complete scene and movement portrayed by a number of objects caught in the frame. Like Tarbell’s painting, it’s defined by what’s missing, and made all the more intriguing for it. Unlike The Breakfast Room, there’s a sense of playful intimacy in this painting, rather than distance.

Tarbell and Paxton were both part of the early 20th century Boston art scene: Paxton’s husband, the painter William McGregor Paxton, cofounded the Boston Artist’s Guild with Tarbell and other artists. They must have known each other at least passingly. And while Tarbell obviously enjoyed painting the feminine form–throughout his life, he used his daughters and wife as subjects and sitters for his paintings–there’s something more idealized and romantic in his approach. There’s a distance between the artist and his muses. By contrast, the intimacy of Paxton’s painting seems daring for her time. Both paintings  are beautiful studies of the morning after, one bright and the other somber.

Next week, I’ll be writing about two still-lifes: Covered Peaches by Raphaelle Peale and Game by Emanuel Gottlieb Leutze.