On the evening of October 5, the mood was set by the rainfall that perfectly complemented the heartfelt performances at the Mexican Indie Music Soundcase hosted by the National Museum of Mexican Art. James Lopez, Madame Ur y Sus Hombres, Jazmin Solar and Carla Morrison were the performers at the event, all of whom expressed intimacy with their audience whether it was a dedication to a lost love or a stance on a political issue. After enjoying the sincere, unapologetic odes of love, lust and heartache by the performers, there is no doubt that the audience did not resonant with such energy and feelings.

As the opening act, James Lopez made his Chicago debut with a raw performance that included ballads and acoustic covers. Madame Ur y Sus Hombres brought a refreshing change of energy to the stage.  Confident, seductive and partnered with alluring vocals, it was clear that Azzul Monraz’s alter ego, Madame Ur, is a powerful performer. The cabaret jazz infused group fascinated the crowd, with soothing rhythms to beats that exploded with energy that created a sudden urge to sway our hips. After their set, Madame Ur y Sus Hombres expressed their excitement, as Azzul explained it was a huge deal for the group to be invited from Tijuana to perform in Chicago. 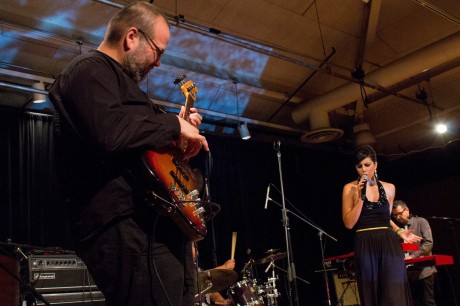 Jazmin Solar was the second to last performance and only further intensified the evening set, with her soulful compositions. The soft pitches in her voice added a depth to her music; whispers of truths and sorrows that became personal for listeners. An effortless breathe of heavenly confessions that had many of us also singing along. 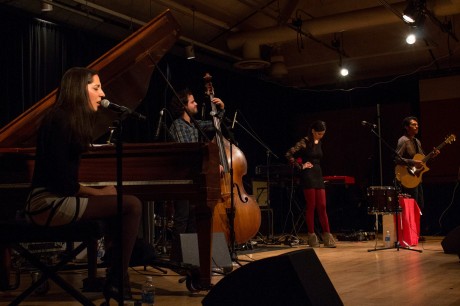 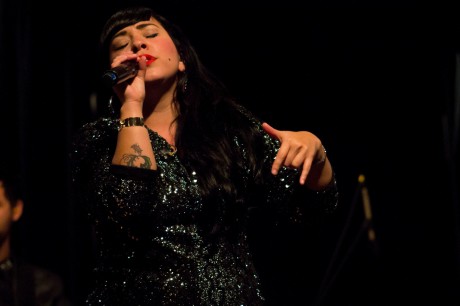 It is difficult to capture the emotion, energy and warmth that she brought to the stage in words. As a subtle symbol of empowerment, she entered with a fierce solo drum introduction. Uniquely gifted with the voice of exotic birds, it was quite surreal hearing and watching her perform. As she shifted in performing songs from her contrasting albums, “Déjame Llorar and “Mientras tu Dormías”, she rhythmically allowed us to traveled through her emotions. In between each song, her personal anecdotes and honest perspectives brought a depth to her performance that may not have been enjoyed at her other shows. Carla’s insightful advice on heartbreak and personal tensions influenced moments of enlightenment which, undoubtedly had the crowd falling further in love with her.