Gozamos is giving away a copy of the Celia Cruz: The Absolute Collection deluxe book, courtesy of Digital Girl Inc. Sign up to win! Winners will be contacted via email.

If there is one woman who is synonymous with the marvelous blend of musical genres known as salsa, she is Celia Cruz. Celia is known all around the world as la Reina de la Salsa and La Guarachera de Cuba, and though she passed away a decade ago, her rich and beautiful voice and amazing musical career reverberates in the hearts of musicians and fans all around the world.

Celia Cruz: The Absolute Collection (Sony Latin, 2013) box set is a celebration of the life and music of la Reina de la salsa. This two-part multimedia “deluxe book” is a 60-page tribute book that contains a double-CD of some of the singer’s greatest hits. Together they give a great overview of Celia’s incredible body of work and honor her legacy. The LP is also available in digital format and has liner notes written by Tom Schnabel of KCRW 89.9 FM, the National Public Radio flag station in Los Ángeles.

A foreword by Maya Angleou sets the stage for the celebratory tone of the book and paints a picture of her life and of the admiration that so many great people hold for her. The book gives an overview of Celia’s life starting all the way from when she was just a girl in Cuba singing alone in her house and continues throughout her career. The bulk of the book is a wealth of quotes from prominent colleagues, fans and friends ranging from Gloria Estefan to Quincy Jones who offered kind reverence for Celia’s talent, charisma and career—and even a nice memory or two of the lady herself.

Perhaps the best part about the book is the never-before-seen photos that are interspersed throughout its pages. From family portraits to album photo shoots, these pictures provide a nice glimpse into Celia’s personal and professional life. Some of the more delightful ones are of Celia and the love of her life, Pedro Knight (who actually shares a nice mausoleum with Cruz at Woodlawn Cemetery in the Bronx, NY) and of Celia’s performances from around the world. 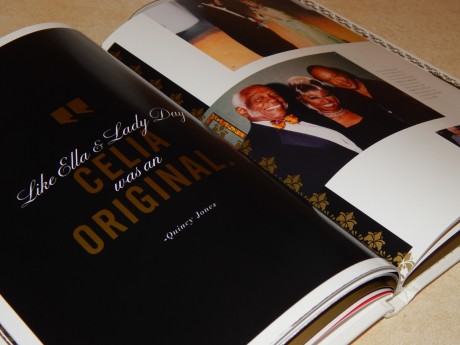 At the end of the book is a pocket with a two-CD set with 30 of Celia’s greatest hits. The track list take you on a journey through Cruz’s career, starting with a handful of tracks done with her first group La Sonora Matancera and ending with the title track to La Negra Tiene Tumbao from Celia’s 59th , Grammy-winning album that was released just a couple of years before her death in 2003. Listeners can experience her music at various stages and catch a glimpse at some of her most prominent and impressive collaborations, such as with Tito Puente, Johnny Pacheco and Willie Colon. The albums these songs were compiled from are also pictured (in case you want to check those out, as well!).

In effect, one can also note the transformation of salsa before their very ears, and the blending of the mosaic of genres that build it. About 16 pages into the book we are reminded that ‘salsa’ is a term created by the “ever canny businessman” Jerry Masucci, who coined it as an umbrella term that “served to unify many regional rhythms such as pachanga, boogaloo, mambo, meringue, son, cha-cha-cha, bolero and bachata under one roof.” Though this book contains music history and information about Celia Cruz’s life trajectory, it has more of a feel of a scrapbook than a biography. In fact, with all the quotes from various artists, colleagues, friends and fans, it reads somewhat like a yearbook of people bidding farewell to Celia but promising to always remember her.

The Celia Cruz: The Absolute Collection deluxe book is a must-have for any die-hard Celia Cruz fan as well as for casual or prospective fans to be properly introduced to the legendary lady and her music. All formats are available on Amazon. 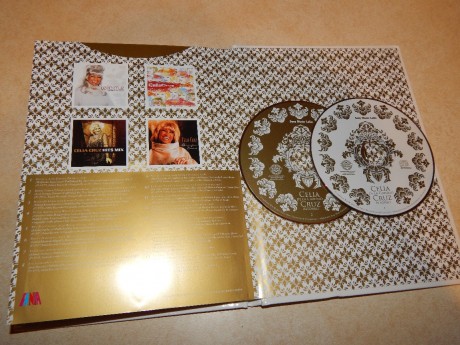