In the new TV comedy series “Brooklyn Nine-Nine,” actress Stephanie Beatriz stars as Det. Rosa Diaz, a no-nonsense officer who is sharp around the edges and serious about her place in the precinct. During our interview, Beatriz, who was born in Argentina and is part Colombian and Bolivian, talked about joining a show featuring ex-“Saturday Night Live” cast member Andy Samberg and shared the tremendous experience she had working on the critically-acclaimed independent drama “Short Term 12.”

We got to see Andy Samberg in a speedo in the premiere episode last week. How do you think he looked? Did he pull it off?

In the first episode, actor Terry Crew’s character describes Rosa as “tough, smart, hard to read and really scary.” Which of those characteristics are you looking forward the most to show off this season?

I think all of them. I mean, she is so unlike me, but she is so like a lot of people I have met. Everyone has that side to them where they want to tell everybody what they think and not have to talk when they don’t want to talk. She just doesn’t adhere to social norms of behavior. I think that’s so freeing and fun to play somebody like that.

Do you think you’d make a good detective yourself?

Well, I made good grades in school. I think most detectives have to make good grades, right? In the Academy you have to do pretty well. Police work is serious business. You’re putting your life on the line most of the time. I think it takes a specific kind of person to do that. I am not that kind of person. I am the kind of person that wants to get up in front of crowds of strangers and perform monologues. To each their own.

When you read the script for this series, what was it about the style of comedy that resonated with you the most? Was it what Andy was bringing to the table?

Well, initially, when I got the audition, there wasn’t a script. There were just sides, which are like short scenes. There was Andy’s character and another cop character. I believe my character’s name at the time was Megan. They ended up changing it later. Just from those sides, I could tell it was going to be really, really, really good. Then, I’m a huge fan of “Parks and Recreation.” I’ve seen every episode. So, when I heard I got an audition for a show written by the guys that do “Parks and Recreation,” I got really excited about it.

You have to feel pretty good that your role wasn’t technically written for a Latina actress, but they liked what you did so much they were able to mold the character to fit you.

Yeah, it makes me feel like they really wanted to get me on board. They were like, “OK, let’s hire that girl because she’s right for the part.” It’s great! [Creators] Mike [Schur] and Dan [Goor] were very adamant that they wanted the precinct to look like a Brooklyn precinct. Everyone wasn’t going to be the same shape, age or color. That’s just not what New York looks like. 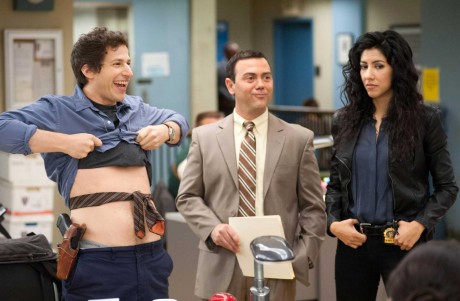 Is that something that is important to you as an actress right now – to go into auditions where roles aren’t necessarily written with a Latina in mind? Would you rather go for roles that are listed as open ethnicity?

I would say what is most important to me is to make sure that the work I’m doing feels like [the character] could be a real person. Whether that means in a script that person is specifically Latina or not isn’t as much of a big deal to me right now as thinking I can make the character seem real. But also, beggars can’t be choosers. (Laughs) I’m pretty new to L.A. and the TV and film scene, so if I can get in the door, that is a huge, big deal for me. So, I would just go in for everything. Luckily, I have great agents who are sending me out for great stuff.

Do most agent usually look out for their clients like that? I just interviewed a young Latina actress who told me her agent basically made her go audition for something (“Devious Maids”) she didn’t want to audition for.

I feel like my agents are really amazing and smart. Not only have I gotten this amazing project because of them, but I’m also in a film that is in theaters right now called “Short Term 12.” It’s an amazingly beautiful indie film. My agency read that script and submitted me for it because they thought it was a good script. So, I feel like they’re just good at their jobs. I’m benefiting from that.

Did you see the “Comedy Central Roast of James Franco” and, if so, what did you think about all the digs at “Brooklyn Nine-Nine” when everyone was picking on Andy?

(Laughs) I’ll tell you this: I think you’re in a good place in your life when people are joking about you being on your own television show. (Laughs) You know what I mean? If that’s the worst thing people can say, I think you’re doing pretty well.

As an actress, did you have any idea how well received “Short Term 12” was going to be from the start or did it kind of surprise you?

You know, I knew it was a really special script. As soon as we started shooting, I knew it was even more special than I first thought. I just remember being on set with Brie [Larson] and tapping her on her shoulder and telling her, “You realize that you’re phenomenal in this, right? You do understand that?” She was so humble and sweet and was like, “I’m so nervous about it.” She just wanted to do her best every day because she felt so connected to the story. I think everyone involved was bringing their A-game because the story needed that respect. I think [director/writer] Destin Cretton is an amazing voice in American film. It’s so great that people are going to get to know his voice.

What kind of conversations did you have with Destin during pre-production, specifically for your role?

He just told me to let myself feel connected to the kids. I remember at one point I had my dressing room door open and there were like six different kids in there just hanging out with me, chillin’, getting to know each other, talking about music and stuff. [Destin] helped us all feel like we were in our own little world. I think that comes through in the movie. 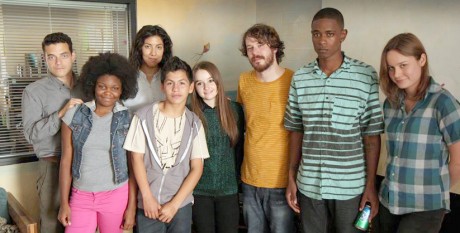 Although we don’t get a back story on your character (Jessica), it seems like she really understands how things work at the group home. Did you have your own story for her in the back of your mind to help you bring your character to life in this setting?

Yeah, well, what’s interesting is most of my background is in theater. So, in theater, you rehearse and rehearse and do this thing every night in front of people. You know what they’re going to see. In television or film, you do your thing in front of a camera and you do it a few times and you don’t know what the editor is going to select for the audience to watch. So, in “Short Term 12,” I actually had a scene that was cut where Brie comes in and asks me about how much I’ve been working. Jessica’s been working double shifts. Brie’s character asks her how her mom is. I have one little line where I say something about chemo being expensive and how it’s really hard when you don’t have insurance. So, there was this back story written about her by Destin. I knew who she was going in. It ended up getting cut from the movie, but it didn’t matter because I had that to work from so, in a sense, it is there .

There are some really powerful scenes in the film. What affected you the most emotionally?

Well, reading the script was the initial time I got to experience the film. Reading it was really interesting because my eyes would be traveling across the page and then suddenly they would be full of tears. I just remember finishing the script and thinking, “Oh my god. I really want to just go into this right now!”

Did seeing it come to fruition on the screen feel the same way?

Yeah, it did! Destin did such a great job. He had such a vision about what he wanted. Reading it from the script and watching it on screen, there are not that many changes. He knew the story he wanted to tell.