Mexican film and TV star Eugenio Derbez says he’s ready to grow up in the entertainment industry. In “Instructions Not Included,” his first feature film as a director, Derbez stars as Valentin, a womanizer who is caught by surprise when a former lover introduces him to his infant daughter. Best known for starring in Spanish-language TV comedies like “XHDRbZ” and “La familia P. Luche,” Derbez is ready to move on and start producing and directing more projects. Besides “Instructions,” his most ambitious goal is to create a Spanish-language version of “Saturday Night Live” in Mexico.

During our interview, Derbez, 50, talked about how his new film parallels his own life and explains how he wants to start a comedy revolution in Mexico. 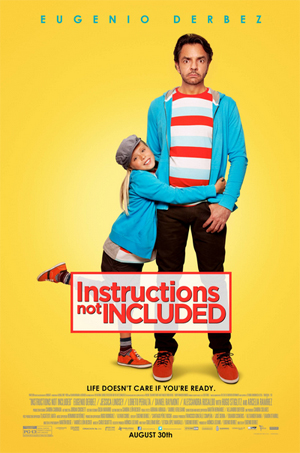 You had experience directing some Spanish-language TV shows in the past. What made you to want to direct your first feature film?

I was trying to grow up as a professional. I had been doing my own TV shows for years. I wanted to show myself doing different work. That was a dream I’ve had since I was a kid – to make a film full of heart. I fell in love when I saw the film “Life is Beautiful.” That’s why I wrote this film. It’s based a little bit on my life. I wanted to jump from being an actor to a director and producer. It’s something I’ve wanted to do for a long time.

Did fatherhood come natural to you?

I was 22 years old when I had my first child. I didn’t want to be a father. Fatherhood was a surprise. I had to face the responsibility of being a dad when I was really young. But then I fell in love with fatherhood. Now, my daughter is the love of my life. Facing fatherhood was the best decision I could make. I love the experience of being a dad.

How old are your kids?

They’re all grown up. Do they still need their dad?

You celebrated your first wedding anniversary last month. What took so long?

(Laughs) Well, I was really afraid of commitment. I was against marriage. I didn’t want to ever get married. But when I started shooting the film, I decided to get married to face the fear of commitment. Now, I’m a married man and I love it. It’s the best thing that has ever happen to me.

Your character in “Instructions Not Included” is a womanizer. Does that also describe who you were before you were married?

Absolutely. (Laughs) But now I am happily married.

How is the casting for “Saturday Night Live Mexico” going and what are you looking for in terms of comedians?

You’ve worked in the past with former “SNL” actors like Adam Sandler and Rob Schneider. How are Spanish-speaking comedians of the same vein different from them?

There is a lot of difference between comedy in Mexico and Latin America and American humor. Every country has its own style. I think you have to adapt the humor of “SNL” in the U.S. to Mexico. I think that’s the main challenge. We don’t want to lose the comedy of “SNL.” But we have to make it more Mexican, more Hispanic, so people can understand the “SNL” humor.

Do you think a subtle American comedy series like “Louie” or “Arrested Development” could be adapted successfully for a Mexican audience?

I think it could work. We just need to change the way Mexico sees comedy. I think the secret of the American comedy is that you use situations. For example, in “SNL” America uses Barack Obama for a lot of jokes. But everyone in the world knows Barack Obama. Not everyone knows Enrique Peña Nieto, Mexico’s president. There is also an issue with that. We can’t play the same jokes with our politicians because no one is going to know them. If we want to sell “SNL” in Spanish to other countries, we can’t use our politicians. We have to use a more universal humor.

Would there be certain lines you couldn’t cross with the humor on a Spanish-language version of “SNL?”

Well, right now, we’re not really open to talk about politics or against the government. That’s one of my goals. If we end up doing “SNL Mexico,” we have to open the minds of the politicians. We have to let them know we need to [make fun] of Mexico’s politics. If not, it’s not going to be worth it. We need to talk about politics and get rid of this old way of doing comedy.

So, right now, do politicians and government officials just take jokes too personal?

Exactly. They take it too personal and they’re not used to it. You couldn’t say anything bad about the president because it was considered a lack of respect. You could get in trouble. Now, things are opening up a little bit. I want to talk to the president or his committee about doing this. We want to do comedy about politics in a respectful way.