Union Park is once again quiet—the stages dismantled, the food tents taken down, the plethora of art, music and book vendors now gone. It was another successful year for Pitchfork Music Festival, which has become Chicago’s premier festival for independent music. Plenty of noteworthy artists, from Björk to Yo La Tengo, from The Breeders to M.I.A., made spectacular appearances over the weekend. However, there were a few particular sets that stood out among the rest. Here are the ones that we enjoyed the most:

Savages were arguably Saturday’s most impressive act. One would think their brand of post-punk would be better suited to a small club than an open-air festival, but they unleashed a refreshingly high-energy set. The frenetic drumming of Fay Milton, coupled with the bone-rattling bass lines laid down by Ayse Hassan provided a wonderfully interwoven backbone to each song, especially “Husbands” and “Shut Up”. Songs like “Waiting for a Sign” showcased Gemma Thompson’s inspired guitar work, which was at times sparse and ethereal, and others frantic and aggressive. Lead singer Jehnny Beth’s outstanding performance was equally impossible to ignore. Her at times haunting vocal work brought an undeniable intensity to every song—none more so than “Hit Me”.

Altogether, it was a fantastically arranged and executed set that caught the attention of anyone within earshot. Judging by the buzz of conversation after their set, it seemed like many Pitchfork-goers came away with the impression that Savages put on one of the most exciting and notable shows all weekend. 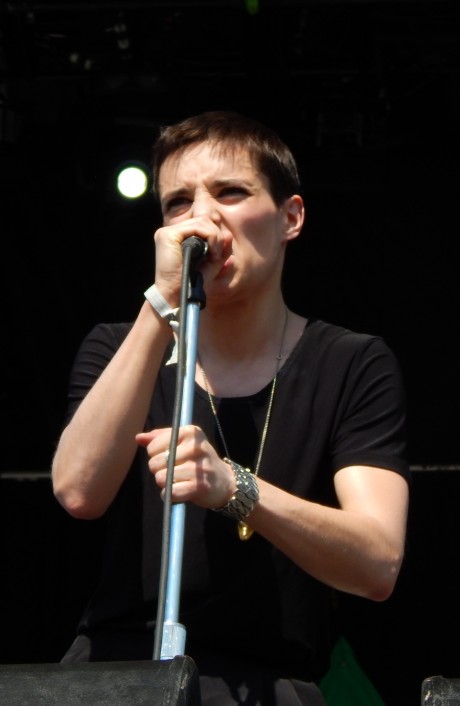 “Waiting for a Sign,” off Savages debut album Silence Yourself 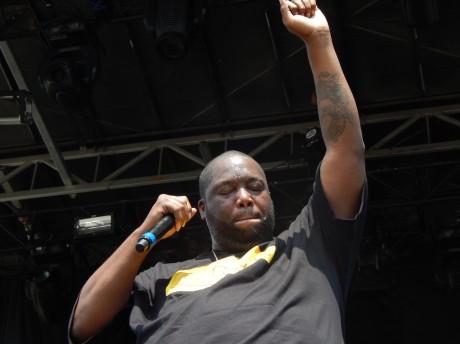 The third, sold out day of Pitchfork contained almost all of this year’s hip hop artists, starting off with Chicago natives DJ Rashad/DJ Spinn’s homegrown house and juke music, and Tree’s excellent set with an ensemble of backup singers and live percussion. However, the hip hop artist whose charismatic and powerful performance stood out among those of any genre was Killer Mike. Along with Trackstar the DJ, he brought the carefree Pitchfork crowd back to reality with his social commentary raps, while also reminding us of the happiness and unity that music provides. Telling us us to “take care of one another” in Chicago and the world at large and monologuing about the many flaws of American life in between songs, Killer Mike’s show was the perfect synthesis of forget-your-problems musical entertainment and makes-you-think hip hop wisdom. His compelling and down to earth personality and showmanship not only drew people in but kept them there for the entire set. The crowd pumped up in particular for the politically-charged song “Reagan,” for which DJ Trackstar put on a Ronald Reagan mask and interacted with Killer Mike and audience while and Mike belted out his frustrations about the omnipresence of government hypocrisy and lies. 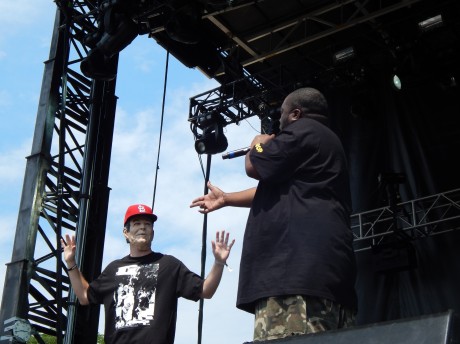 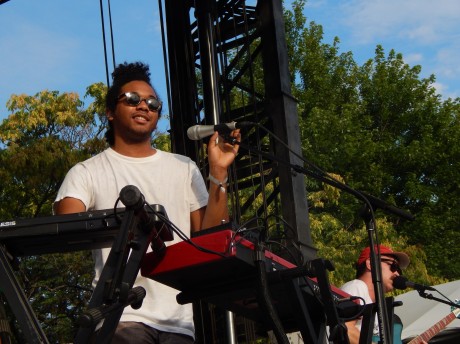 Full disclaimer, I (Ilene) think Toro y Moi’s album Anything in Return is one of the best of the year, hands down. My affinity for the genre-crossing, complex yet uncontrived music of Toro y Moi left me expecting a hell of a lot from the man behind the music, Chad Bundick, but he and his band did not disappoint. His set exemplified his ability to translate headphone-friendly, heavily digital chillwave tracks into a live, outdoor performance at the largest stage of the festival. With an adept percussionist, guitarist/keyboardist and bassist backing him up at his own keys and synth board, Toro y Moi’s live actualization illuminated the ever-present groove and dancemix flavor of his music. He got everyone who happened to be standing nearby up and dancing on the sunburned lawn. The performance of the second single from his latest album, “Studies,” was possibly the best of them off, showing off Chaz’s vocals, excellent guitar distortion as well as some funky, smooth bass lines that fell right into place among other bass-heavy rhythms that many of Pitchfork’s dusktime bands showed off.

“Studies,” off Toro y Moi’s third album Anything in Return 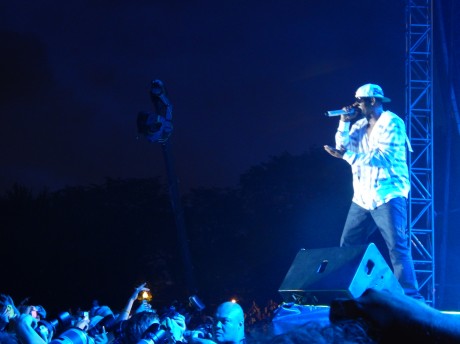 We went to see R. Kelly fully anticipating to be entertained, but not expecting to be completely blown away by this unforgettable final act of Pitchfork 2013. The Chicago born King of R&B did a compilation of highlights from his extensive catalogue, starting off with a bang with the intoxicating track “Ignition (Remix).”. Instead of playing songs in their entirety, Kelly chose to focus on the best and most memorable parts of a large number of tracks, going from one song to the next like a live jukebox. This surely satisfied both die-hard fans and those who know only a few songs from the radio or MTV.

Backed by a small band, background singers and, at times, a full gospel choir, the enigmatic singer provided a stunning, powerful vocal performance that could make a person forget, if only temporarily, about the more shady aspects of his past (you know what I’m talkin’ about, though if “Step in the Name of Love” didn’t make you forget a little back 2003, then nothing would). Walking the fine line between a caricature of an R&B singer and the realest one you’ll ever see in your life, R. Kelly didn’t stop singing in between songs, but rather surprisingly demonstrated his singing and songwriting talents with often silly but impressive improvised story/conversation-songs that many of us had heard about. One ‘song’ was about how he was so “great” and “in shape”, another was about needing to wipe his “motherfucking face” with a towel and yet another was about how they told him not to swear or be dirty but that he had to because this is some ‘grown ass man sexy music’.  A random cover of Kanye’s “Flashing Lights” with lyrics and melody all his own also made it in the mix. Talk about keeping it interesting.

But perhaps the best moment of his set was, nerdily and unsurprisingly, “I Believe I Can Fly,”  which possibly every single person in the audience sang along to, wowing even R. Kelly himself. To really drive it home, a number of plastic dove balloons were released at the climax of the song, floating away to the skies and streets of the Chicago. Bow to the King.

“Step in the Name of Love” off R. Kelly’s 2003 album Chocolate Factory