With my second son, it crept up on me. I was not, this time around, anxiously marking the days until the magical four-month-mark when he could start solids. No, this time I gladly heeded the recommendation of our second pediatrician that we wait until six months to start solid food. And she meant only to start.

With our first son, though we switched pediatricians at about five months because we did not mesh on many topics, we definitely picked and chose on the age recommendation for starting solid food because we were such excited first time parents.

A lot can change in a short twenty months.

For one thing, this spring the American Academy of Pediatrics got on board with a lot of what the baby food cookbooks and blogs have been saying all along, at least since I’ve been reading them: it’s best to wait until a baby is at least six months old before feeding him anything but breast milk or formula. The risks of feeding a baby solids too early include not only the baby being unable to process solid foods but also higher chances of becoming obese and/or diabetic later in life (though I’m not sure how much that considers other factors like socioeconomics).

Yes, the actual health benefits were a big part of the reason we waited until six months to start solids with baby number two. The other deciding factor was that I kind of forgot. It was just so easy not having to bring anything with me when I went out with my kids aside from a nursing cover, or some equivalent ranging from dish towel to blanket. And I was still working on creating a repertoire of interesting every day meals for my husband, my toddler and myself, let alone regularly making fresh organic baby food, too! 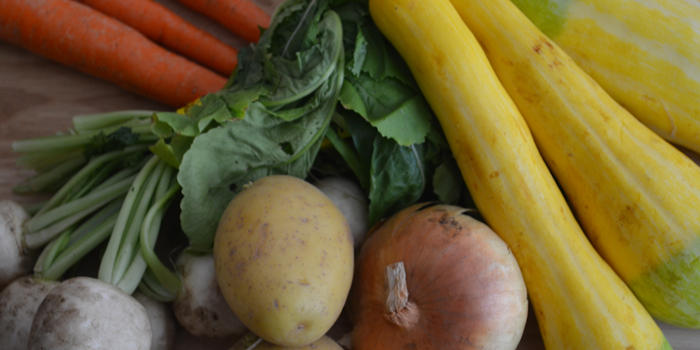 But I trudged to Whole Foods (on the day I remembered my kid needed to start eating solids), bought some pears, steamed them, pureed them, froze some, mixed the rest with rice cereal that my son had already been sampling. And then came peas, zucchini, sweet potatoes, etc. And then he got bored. How do I know my baby got bored? When presented with his baby food, he’d take one look at it and lunge for whatever his brother was eating instead.

While my first son was content with his purees and cereals for a few months, in addition to little tastes from our plates, before eventually working up to tacos and curry and pad thai, baby number two wanted the good stuff right from the get-go, probably in part because he was older when he started, and maybe because he has stronger powers of observation. Seriously, if he had more than one tooth right now, he’d be eating burritos.

So I got a little more creative – the most interesting baby food I made last time around was squash soup – and skipped a few chapters in Cooking for Baby, one of my go-to books, and learned very quickly that bacon makes everything better, even baby food.

One of our favorite recipes, and I mean all four of us when I say “our,” is a White Bean and Kale Stew. I adapted the recipe from Parents Need to Eat Too to better suit what I had on hand from the farmers market or could be easily obtained at Trader Joe’s. This baby-and-toddler-friendly stew can be pureed, eaten as finger food, or eaten with a spoon. And while I like to think that the taste of kale is what leads to my baby eating this stew so furiously, so much so that he’s trying to lick the spoon as I’m scraping leftovers off his face, I have a feeling it’s the bacon.

Inspired by the success of my kale stew, and a boat-load of veggies from my friend’s garden, I set to work finding other more interesting pureed meals for my little guy. Given that I had about ten pounds of beets and not an intriguing baby beet recipe to be found, I roasted a pan of beets, turnips and carrots, left them in too long, pureed the lot together with some chicken broth, and then added some steamed apple puree to make the overdone veggies a little less bitter. Success!

With the addition of Summer Squash Soup (parsley blended into the soup instead of making the pistou) from Smitten Kitchen, I had a tasty little baby food repertoire going for a few weeks and was feeling pretty good about my mothering and cooking skills.

And then my son got his second tooth and decided he was all about finger foods.

(adapted from Parents Need to Eat Too)

Heat oil in a large pot. Add onions and cook until soft.

Add the tomatoes with juice, chicken broth, beans, bacon and black pepper to taste. Bring to a simmer.

Add the kale and cook until tender, 8 to 10 minutes. Serve as is or puree for baby food.