You may have guessed from the name of this column that I fully revel in my self-proclaimed nerdiness. Why shouldn’t I? I never picked up the knack for coyness or ironic disdain. If I like something, I tend to get enthusiastic about it and spread my enthusiasm around. This is a family trait, and my family’s collective knowledge about the Lord of the Rings, Star Trek, the Marx brothers, bookbinding, gardening, tea, zombies, Phil Ochs, European history and dystopic literature is pretty wondrous to behold, if I do say so myself. We’re pretty awesome at Jeopardy.

Over the years, my particular nerdery has shifted its focus a few times. Currently, it’s split between food, books and writing. (Amazingly enough, I work in a cafe, a bookstore and as a writer. It keeps me busy, but I love it.) One place that these areas mesh is in books and publications about food, and in the past week, I’ve picked up four very different ones. 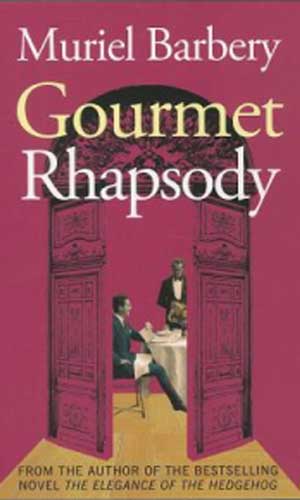 The first is a novel by Muriel Barbery, a French writer who is most well known for The Elegance of the Hedgehog, which was released in English in 2008. Her debut novel, Gourmet Rhapsody (in French, Une gourmandise) is much slimmer, and was released in English in 2009 without much fanfare. I’d been eyeing it for weeks at the bookstore where I work and finally bought it.

Barbery is a professor of philosophy, and her narrators are inclined to existential pondering. The Elegance of the Hedgehog is full of meandering discussions on the nature of art, beauty, suffering. Moments of enlightenment pop up in unexpected places: when tasting sushi, while shopping in an overpriced boutique, while reading a letter with atrocious grammar. Gourmet Rhapsody so far, is similar, though more firmly entrenched in worldly phenomena than phenomenology.

The narrator is Jean Arthens, a loathsome food critic who is dying of heart failure. He has no love for his wife, nor any for his three children and hardly thinks of them: “If they expend all their energy hating me with all their strength,” he remarks, “that is no concern of mind; the only paternity that I might lay claim to is that of my own oeuvre.” In his last, dying hours, he meditates on a singular flavor, the origins and nature of which elude him. While his family ambivalently mourns him, Arthens wanders through the memories of banquets, his grandmother’s table, his aunt’s garden, searching for the flavor that he’s holding in his mind.

Though I haven’t found myself as enthralled by Gourmet Rhapsody as I did with Elegance, I will never tire of the way that Barbery describes food, imbuing a meal of grilled sardines with existential depth:

One must be strong in spirit to confront a taste like this; concealed within, very precisely, is the primitive brutality that forges our humanity when we come into contact with it…

Meat is virile, powerful; fish is strange and cruel. It comes from another world, a secret ocean that will never yield to us; it bears witness to the absolute relativity of our existence, and yet it offers itself to us through the ephemeral revelation of unknown realms.

Memory and taste are also at the heart of Relish, a graphic memoir by Lucy Knisley. A collection of stories of her life interspersed with recipes, Relish takes us from New York to Chicago and back again, with stops in Rome, Mexico and Italy. Each chapter uses a particular food as a gateway to a memory, or vice versa. Knisley’s art is bright and cartoony, with colors popping off the page. I’m not gonna lie. I drooled a little while gazing at her illustration of apricot jam-filled croissants. 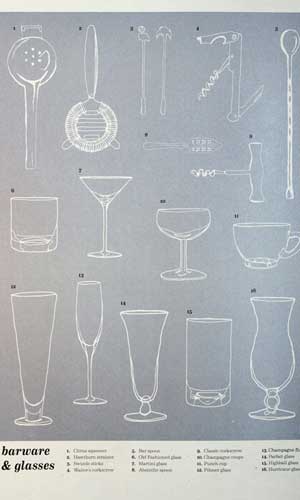 This isn’t the first food-centric graphic novel I’ve seen in the last couple years. I went to see Knisley speak at Challengers earlier this month, and by the time I got there, it was standing room only. (I was lucky enough to get a spot near the food table and snuck a few cookies as Knisley spoke.) Knisley mentioned meeting James Kochalka while studying at the Center for Cartoon Studies in White River Junction, Vermont, who told her that he had enjoyed her work but that making comics about food was “cheating.”

Bring on more cheaters, I say.

My other fun find this weekend came via Quimby’s, which as it turns out, has a large selection of food-related zines and publications. The one that caught my eye was called Regional, a zine by Cassie Tomkins that’s dedicated to exploring American food. I picked up the cocktails issues (which came complete with a drink umbrella). It unfolds to a 11.5″x16.5″ double-sided poster, featuring a quick history of American cocktails, along with some recipes. The other side featured diagrams of barware and glasses.

I could talk all day about the aesthetics of information dissemination and the beauty of a concise and factual infographic, but really, you should just see them for yourselves. You can buy issues via Cassie Tomkins’ Etsy or at Quimby’s. I think I’m gonna get the sausage issue next. 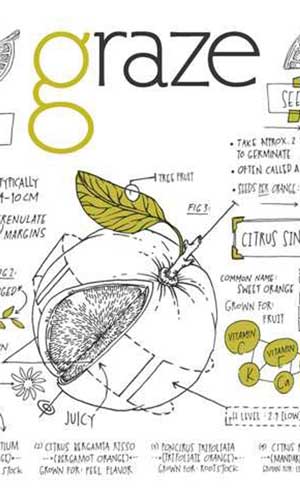 Quimby’s was also the first place where I saw graze, a literary magazine devoted to food. Each issue is a mixture of poetry, essays, fiction, illustrations, interviews and photography. As a physical object, the magazines are gorgeous, which I appreciate more and more as publications go digital, a magazine to leave on your coffee table or pass around at your next potluck. This weekend, at the Intuit Gallery, they released their third issue in style, with a music set by Sidewalk Chalk, a culinary confession booth, and, naturally, a ton of food. I’ve been reading graze since its first issue, and it’s consistently surprising. Their third issue is possibly their most eclectic, with thoroughly post-modern fiction (for example, a story written in the second person about a waiter needing to pick his nose) rubbing elbows with poems about Amelia Earhart and in-depth feature essays about Chicago’s vertical farms and the act of saying grace before a meal. Beautiful illustrations litter the pages, and there’s also a photo essay of a lonely fishing boat venturing out into the open sea.

Food writing has its history and precedents, and for decades, it seemed to be firmly stuck in a modern sensibility, with memoirs and travelogues for the armchair travelers and chefs among us. These four publications — a novel, a graphic novel, a magazine, a zine — all push the boundaries of the genre. In graze, the poet Sin Yu Pai writes, in a poem titled “Osaka (Conway, Arkansas)”:

in the NYTimes of the shift

the rise in imported grain,

how we reorient our bodies