Let’s take this opportunity to thank all the haters and naysayers and teachers who, in their own weird way, helped create the monster who has come to be known as Revise CMW. He’s been busy as hell, and his solo show opens up at Modest this weekend. Check out what he has to say on life, love, and the pursuit of craftiness…

Tell us about the origin of your name, Revise CMW…Chicago’s Most Wanted.

My name came from being a poor student in English class in high school. I was tooling with other terrible names when I started, and then the one word that was stamped on all of my papers was “revise,” so I kind of went with it, not at all thinking that 6 letters may be a pain in the ass to get up with at times, but also liked the challenge. CMW is the crew I’m in and rep so I figured it’d be better to set myself apart a little by always including it after my name.

So, how did you hook up with the fine folks at Forest Park’s Modest?

I’ve known Danny for a while now having immersed myself heavily into what used to be an actual graffiti scene when you had to travel to take flicks instead of hashtagging everything and finding it quickly on the interwebs. Danny and the team at Modest have always been artist driven and supportive of anything local and creative. They’ve been on their grind so long, it was only a matter of time that we would get a show going together. Most recently, I linked up with Danny and Omens out at Art Basel and kicked it and thought it was time to do a solo show and come full circle! 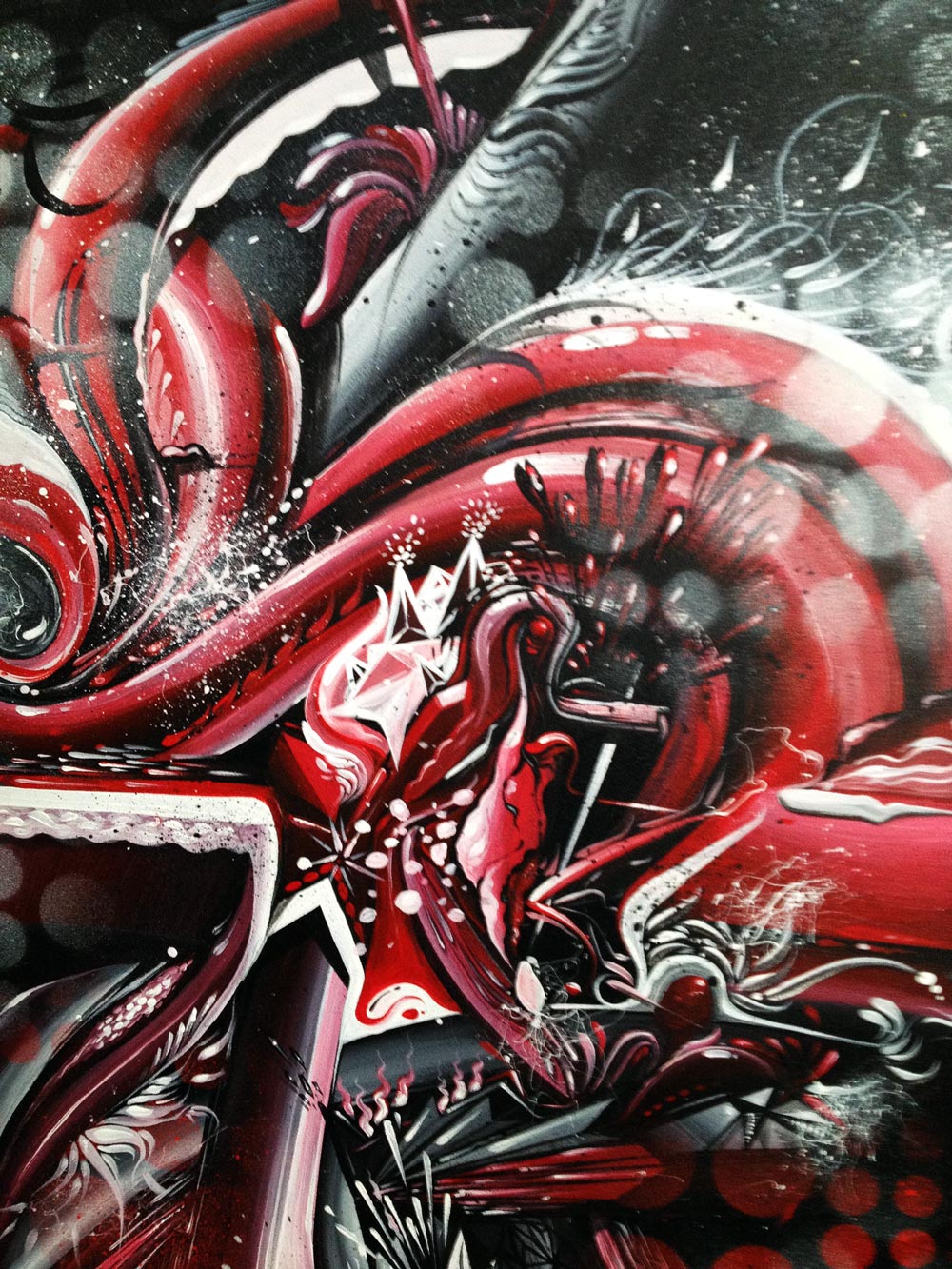 The show is entitled “Barely Here” as an ode to how much graffiti has progressed and how hard it is to stay active and relevant. I felt like I painted alot this past year and worked my ass off in general and I felt like I didn’t even make a dent. There is so much talent here in Chicago and abroad and I feel like I’m an outsider looking in not really contributing as much as I should. I really hope people see that I still have passion and am really trying to keep up with trends and styles without having become stagnant. I’m trying to apply new techniques and kind of starting over with what feels like yet another renaissance with graffiti art. 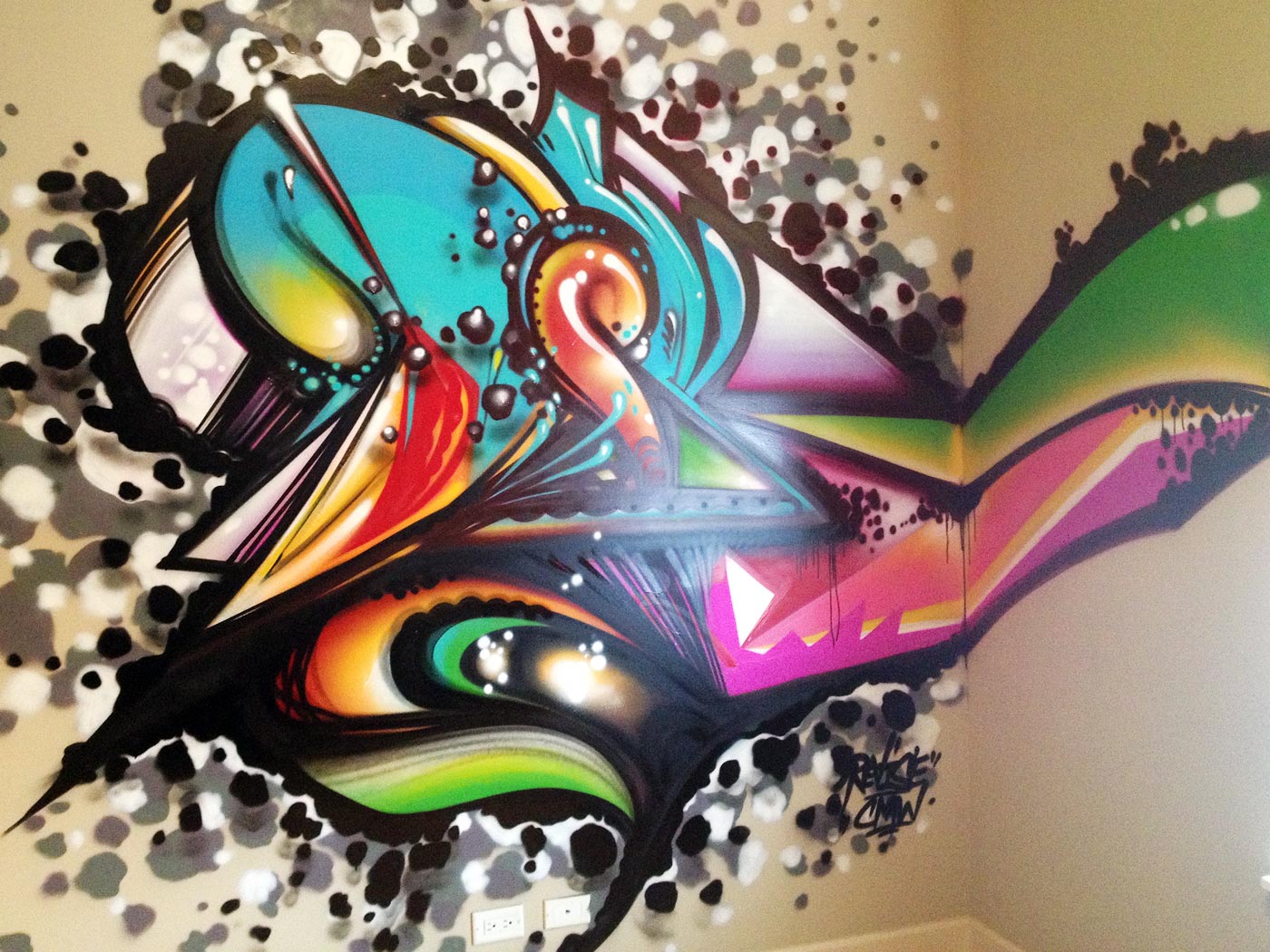 It was mind blowing and depressing at the same time. That whole city and art support make Chicago look like a conservative old woman. I couldn’t believe how many large scale walls were being done from people all over the world, all the onlookers that loved it and all the support artists got from every angle. There was definitely an energy I’ve never felt about painting and creating art that was very refreshing. It just engulfs you and it’s overwhelming. It’s depressing to know that Chicago will NEVER have anything of this magnitude because we just don’t have enough open minds or supporters. I always say that we are one of the largest cities with the smallest minds.

I love having grown up before an era of electronics because it really made me go out there and explore my city. It really wasn’t so much a “scene” as it was really letting go of boundaries and going into shitty neighborhoods to check out a show or a wall, going to zulu loft parties based off of a paper flyer with a bboy character on it…it was stuff like this that was my childhood growing up which fueled my curiosity and motivation to draw/paint. My style was/is developed with what surrounds me in all aspects.

You seem to be hella busy, and as your blog suggests, anyone who is not taking advantage of all life has to offer is just not doing it right. What are you the happiest doing? And what are your favorite things about art, painting, and music?

Unfortunately, DJing is kind of on the back burner now because music is a whole other beast to keep up with, and I think I’ve reached that old man status where nothing will be better than that golden era of hip hop. Otherwise, I’m most happy when I can make other people happy with things that I do creatively. I really wish I can focus on either cooking or art full time but I get into a rut with both so when that happens, I do one or the other to keep my au jus going. Get it?

How and when did you become so passionate about food and good beer?

I’ve always been passionate about food, just never really made it public because food to me was personal having grown up helping my mom prep dinners; kimchi, soups and always being her taste tester and things of that nature. I’ve been in the service industry for over ten years having gone through a lot of bullshit…which is where the beer comes in. Having been surrounded by creative people with all kinds of passions opened me up to a whole new world beyond my trusty Old Style. I really credit Matt Granstrom, Madadam, Jay P, and Ruben Aguirre for opening my palate to a whole new world of beer back in the early 2000s. And again, my curiosity and drive to always explore would lead me on a whole new journey and passion for great suds.

Who are some of your favorite chefs and/or restaurants?

Schwa is my favorite restaurant. Michael Carlson and his staff are beasts and are just amazingly cool and appreciative of everything. I also like Longman and Eagle, Fat Rice, Avec, Publican, Nightwood, A Tavola, the list can go on for a while but I’ll end it with Don Pedro’s in Pilsen.

How/when did you first discover your style and aesthetic as a painter?

I don’t know if it was any kind of discovery per se, I think I just molded myself into whatever it is I do now. I’ve grown up with people constantly telling me that I was a biter and that I should keep changing my styles, etc. So now I just do whatever. It’s been a long journey with a lot of criticisms, opinions, and straight up hater shit. I just try to make people happy and do whatever I can to keep progressing and keep the ball rolling.

Who are some of your favorite painters and/or galleries?

Chris Silva, Ruben Aguirre, Seventh Letter, Amuse, Sege, Cyfn, Jonski, Solo, CZR, CMW, RK, Asend, Jash, Repos, Leks, Migue, Rila, Omens, James Jean, Ron English, Os Gemeos, Barry Mcgee, Craola, Dabs Myla, Jeff Soto, Nychos, Scribe, Rapes, Emit, East, Taste, MUL, Pixel Pancho, Aryz, Nice One, Jeremy Pettis, Brooks,  I mean, this list can go on forever. CUAS has always been a favorite mainstay for me. They have always supported the arts and have survived the dreaded 1-2 year lifespan of independent galleries. I’m also a fan of the Co-Prosperity Sphere in Bridgeport, its kind of a free for all in there. Oh, I also want to add Galerie F as a favorite. They are one of the only galleries on the North Side that actually supports the street art/graffiti culture with awesome guest curators and group shows that are very well laid out. 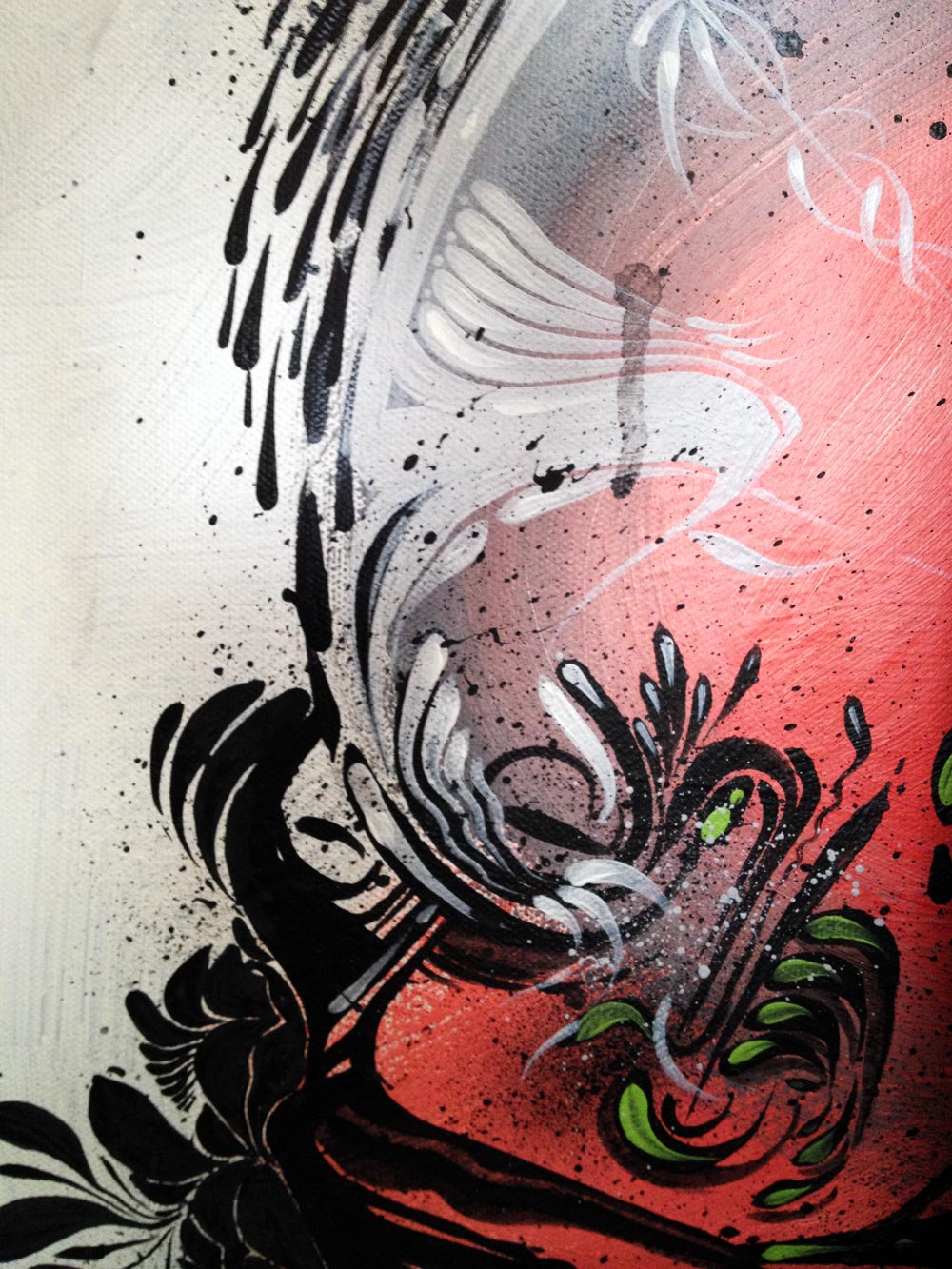 If you could bomb one spot in the whole world, without consequence, where would you go and why?

Is this a trick question?

What are you most excited about for 2013? What do you have going on this year?

I think I’m excited to keep working and painting. Looking forward to Art Basel again, another beer art event called Over the Influence, a possible Brew HaHa event out in Cali, and just painting more walls in general.

What are your short/long term goals?

How can our readers stay current with what you’re up to?

Just follow the blog www.sleepingisforsuckers.blogspot.com – I try to update weekly but I lose track every once in a while. Otherwise @revisecmw on instagram or just ask me via email! revisecmw@gmail.com