Growing up in Mexico, my childhood was a portrait of brown faces, holding hands on the dirt roads lined with bakeries and hardware stores, smiling because we’d been educated in the beauty of life through a culture of poverty, family and celebration. Sometimes church did the teaching, sometimes family and sometimes people learned on their own—personally, my father had taught me. I remember living in La Paz, Mexico, BCS. My father would wake up earlier than 5 am to stack bricks on the backs of flatbeds 30 miles from home. While he was away, my mother would housekeep, and I would be behind the mini-mart with friends playing soccer or gambling on coin tosses for bags of chips, but when my father returned, my mother, sister and I would crowd around the pick-up truck and decide where to eat that night.

Food was our recreation. In the morning we would work and put away the desire to explore and celebrate. But at night the streets would fill with people and salesmen. The businesses, which seemed empty throughout the day, now harbored ambulant salesmen and their customers at their storefronts. The neighborhood filled with the sound of ranchero music and guitars and the clinking of beer bottles. It was at this time my family walked outside and my father, using clairvoyance developed from years of hunger, guided us to a new dinner each night: Hot Dogs with a septuagenarian named Chuy, popsicles at La Michoacana, corn in a cup with Don Jua-le, Mexican-Chinese food at El Dragon Dorado. It was a carnival every night.

But our favorite place in the world, a place we revisited and heralded even when we’d tried the luxuries of a US five-star, was a taco shop in Tijuana, Mexico, called Tacos El Poblano. Located off the side of one of Tijuana’s most trafficked roads, El Poblano is a structure of pure white tile, built like a conclave into the corner of a medical building. They use plastic party tables with Coca Cola labels on them, and instead of soft soap they use powdered laundry detergent—the kind of soap truckers use to rinse the tire-grease from their fingers—and they are filled up to capacity (if there is such a thing) every night, with people dressed in suits as well as those in rags. It’s the kind of place you shout a number to the cooks, dressed in their butcher robes like doctors and then receive that quantity of tacos on a plastic plate; they trust you enough to make count of your orders when you pay.

At 18, there is little I have to be nostalgic about, but each night I crave El Poblano and the traffic of the roving salesmen I grew up with. But I have found refuge in the cradle of Chicago’s Pilsen, in a taqueria and marketplace called Lago’s Fruit Market. 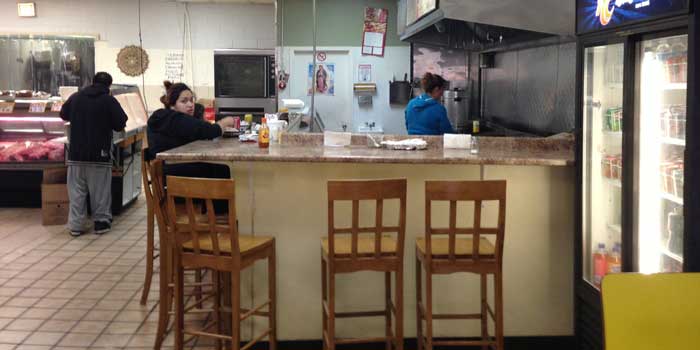 Off the Pink Line, down a block west on 18th St, Lago’s storefront blends in with its peers: plastic billboards reading “x’s Market” or “Taqueria el x,” sometimes with images which look like they’ve been designed in Window’s XP Microsoft Paint mounted on architecture which ranges from gothic to Victorian to Walgreens. The street is a bricolage of the immigrant experience in Chicago, where you cannot be sure if you stand in Mexico, USA, or somewhere in the middle. But inside of Lago’s, advertisements for Abuelita hot chocolate hang next to a bin full of mantecadas and bolillo are written in Spanish, ingredients the dim lighting serves as a precursory stimuli to the light smell of chlorine and Pinol which permeates the air as you walk closer to the back, where the butchery and taqueria are located. The taqueria area is just a bar with a stove behind it, attended by a butcher in the same lab coat as El Poblano. The menu is handwritten with Sharpie and includes quesadillas, tacos, tortas, gorditas, with a myriad of different meats (cecina, carne asada, al pastor, lengua, etc). 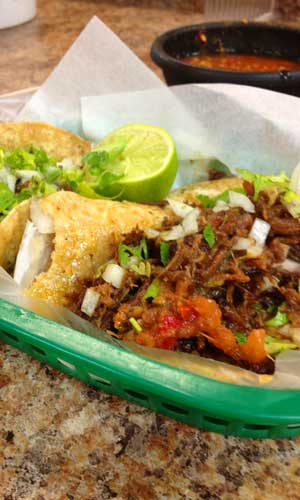 Once you sit down on one of the stools, the butcher will ask you what you want. If you’re smart, you’ll have come early enough so that they have everything made, but if not, you’ll ask the butcher what he can make and he’ll tell you. Based on the butcher’s answer, you’ll select. The first time I came, I came as poor as I had as a kid in La Paz, so I opted for the “Especial Tacos,” which are $1.50 per taco (as far as I know, the cheapest taco in Chicago). I ordered 6 tacos—2 chicharron (in green salsa), 2 barbacoa, 1 al pastor, 1 lengua. And I’ve ordered a 100 more since then. The chicharron was succulent, drowned in a thick sweet-sour green salsa, perfectly complimented by onions and cilantro. Barbacoa was melt-in-mouth, soft enough so that you could dismantle the meat by pressing it against the roof of your mouth with your tongue. Its broth had hints of oregano and bay leaves and chile ancho, like a cross between Pozole and Birria. Al pastor alright, as it’s done on the stove instead of the traditional shawarma style, but still among the best I’ve had in Chicago. The adobo was mild, cooked crispy and complimented well by onions, cilantro and red salsa. Finally, the lengua, which is served only on weekends, was like eating tiny pieces of filet-mignon-centers—simple, sweet, delicious. The tortillas themselves are fried with the grease of the meat, just like on the street, so that they’re smoky and crispy when you receive the taco. Each taco is filled to the tips of the tortillas with meat. I had 3 of them and was done, but finished all 6 out of love.

Value aside, each bite of their tacos is a taste of Mexico. There’s no need for its billboard to read “Authentic Mexican Food” because Lago’s assumes its customers can step through their door and understand that they’re experiencing an authenticity which does not require a marquee. Now, by no means is Lago’s a perfect replacement for the lifestyle I experienced in Mexico, but it is the nuances of the establishment—the smell of Pinol and Clorox, the butcher coat and the sounds of Spanish—which can envelope you, as they did me, in the warmth of nostalgia. That is priceless. Combined with their fantastic cooking, Lago’s is as close as Chicago can get to the nightly carnivals I experienced in La Paz and Tijuana.