The movie Bless Me, Ultima is based on a controversial novel written by Rudolfo Anaya that was challenged in the U.S. in 2008 due to its content. Notwithstanding the ban, reports also state that the book has been introduced abroad to students as an example of Chicano LIterature and as an important and non-derivative type of American Literature.

I reckon that every Latino culture knows a bit about Santeria (excuse me while a re insert a pin on my VooDoo doll), and Bless Me, Ultima’s storyline highlights the life of a young boy, Antonio, played by Luke Ganalon, who throughout the movie witnesses the causes and effects of Santerismo at a very young age.

Through Ultima (played by Puerto Rican Miriam Colon) the Curandera’s trabajitos, she guides Antonio and lovingly explains to him the nature of Santeria, the wonders of the world and the spiritual realities to which she employs. The movie is very touching in nature as it walks you through the positive acts of Santerismo exhibited by Ultima but it also gives you the harsh repercussions involved in the religion that effectuate once you alter someone’s life. 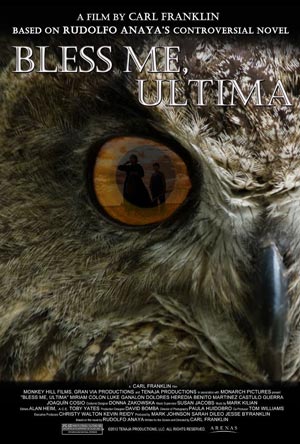 Gozamos had a chance to speak with the very talented Raul Castillo who plays Andrew, big brother to Antonio in the movie. Here’s what he tells me:

For those who haven’t seen the movie, tell me about your role.

I play Andrew, one of three of  Antonio’s big brothers. Antonio plays the main character. Andrew is in the military, overseas alongside the other two brothers. However, Andrew is one of the brothers that Antonio really admires, and while he loves all three, Antonio has a special connection with Andrew. While Antonio, as young as he is, is more spiritual, Andrew’s character is more on the carnal side of events, who frequents the town’s brothel and is more of the flesh.

I find it fascinating to see young children on the big screen. Was Luke at ease with his role?

Very much so. He’s about 7 years old and a complete natural and as his father tells it, a very grounded boy. He was not at all overwhelmed by the magnitude of the production, very playful yet serious and committed. He was a lot of fun to work with.

How was it working alongside Miriam Colon, a very decorated actress?

Great. She’s amazing to watch and she brings authority to the set. I have a lot of respect for her craft. She brought everyone together in a wonderful way. I could watch her read the phone book! Whenever you get to work with a veteran actor, it’s always a real honor.

Where did the filming take place?

We were stationed in Santa Fe, New Mexico and parts of Northern New Mexico.

So, I am sure you are happy you landed the role?

Oh, absolutely, I was one of two New York actors, I was very proud to be representing New York City. The other actors actors are from L.A. and New Mexico.

Were these sets or were you out in the real Campo?

We were out in the real Campo. As a matter of fact one of the locations we used was Val Kilmer’s ranch in New Mexico.

Brujeria, heck El Gran Combo sings about it….  What do you know about Curanderas Raul?

Very little, I grew up Catholic. However, it was always around and it is definitely in our culture. I’ve had “limpias” when I was young. About a year ago a friend of mine was in town involved in a play that had to do with Santeria and we went to Queens and visited a Santera. The Santera read the ashes of the cigar she was smoking in our presence.

Was she accurate in her reading?

Yeah…  These days I am not that religiously involved but I have great respect for people’s beliefs and I respect it enough to take it seriously.

Hypothetical: you see VooDoo dolls on a table of someone’s house you barely know, do you run for the hills, or do you stay?

I’ll stay, I am not afraid. I love that stuff…  I’ve always been curious about those types of things.

You know, most people would run for the nearest exit.

Yes, I know; You know what?  I think that’s where the banning of the book came from, people not wanting Santeria being associated with their religion. I feel that Santeria and Curanderismo comes from religion as well as very strong spiritual beliefs.

I understand the book was banned, did you read the book?

Yes, I read the book in school when I was 19 and I re-read it when I got the role. It was so nice to read it now that I am older. I think the controversy behind the book has to do with the fact that it deals with religion and some people tend to fear what they do not understand. The book was not all that different from the script. I think Carl Franklin was really there with the book.

There’s a quote in the movie that states: that our spirits are shared in the spirit of all things.  Do you agree with that statement?

Yes. More and more as I get older I believe that there is a connection with us and the universe.

What else are you up to professionally these days?

I guest starred in Blue Bloods and I have a scene in The Girl, a movie that came out this week. Outside of that, staying very busy. It’s pilot season ,so I am running all over the place.

It was great talking to you Raul, I wish you much continued success.