Netflix, now a contender against big networks for prime programming, is exploding with the release of their original series, House of Cards. Netflix also has planned to launch a Dream Works animation kid’s series that should be out soon. Netflix’s biggest advantages? One: low subscription prices.  Two: (and most importantly) the ability to stream live from anywhere and as you know, video rentals delivered to your mailbox that you can keep for as long as you want without the extra hidden fees. Genius!

Netflix’s (outbidding HBO, Showtime and AMC.) firstborn project, House of Cards which is based on a novel by Michael Dobbs, is a political drama series holding the title of an outright blueprint of scandal, manipulation and big egos in Washington.

Kevin Spacey, who serves as Executive Producer and plays a U.S. Representative named Frank Underwood alongside his very pragmatic wife Claire (Robin Wright), carries the show the way he carries any project in which he finds himself. 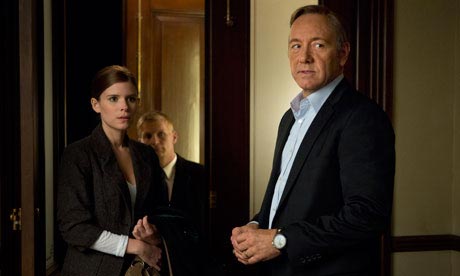 This twisted duo form a team of masters of deception, self-righteousness and hidden agendas. They seem to be living in an open and honest marriage with the understanding that if either slip up, the mistake is forgivable so long as their common interests remain the priority of their union. Catch my drift?

Frank, upset at being passed over as Secretary of State, plays out his vengeance as an extremely ambitious and manipulative member of congress. He works his magic around Washington and abroad. He holds the acquiescence of a well-seasoned chess player. His character, always ten steps ahead of everyone else and hardly ever surprised by extraordinary circumstances, always moves about and expertly grooms and positions people in places that will later fulfill his purposes. So evil and yet so sexy!

I recall a scene where he enters a church carrying his featherweight conscience after making  Peter a decedent (I won’t give it away!). Notwithstanding his impetus of a non-believer, he stands at the altar and states:

“Peter, is that you? Stop hiding in my thoughts, come out.  Have the courage in death you never had in life!  Come out! Look me in the eye and say what you need to say. …..There is no solace above all below. Only us, small, solitary, striving, battling one another… I pray to myself, for myself” He then walks over to the liturgy and proceeds to blow out each candle. This scene alone showcases Frank’s appalling and cold-blooded nature….

Claire, on the other hand, seems to be more of a humanitarian with a conscience, unlike Frank. She’s always aware of Frank’s plans, and assisting him greatly along the way. Claire, desirous of success, depicts a nourishing wife who could later have a strong grasp of Frank’s balls and a manipulating position of her own. Love and affection doesn’t play a big role in their marriage.  Claire fulfills that with Adam, a photographer played by Ben Daniels. 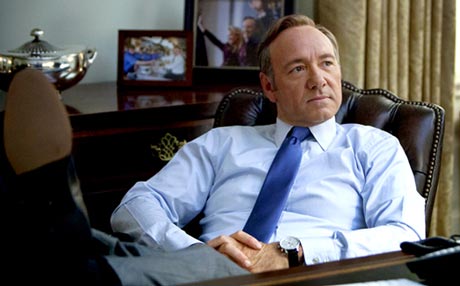 Frank, of course gets his rocks off with the very young Zoe, played by Kate Mara. Zoe, a green and ambitious writer for the Washington Herald hits the jackpot when Frank basically rolls out a promising career for her by simply feeding her stories that would later make her a very famous journalist. A time thereafter, Zoe rebels at Frank’s manipulation which may or may not unveil a murder in season two. Of course, Frank only feeds her stories
that benefit his causes, using her to later discard her as he stated on their first night together.  Zoe’s character grows with each episode with a slim resemblance of Frank’s character in that she too, is manipulative in her causes for the truth in each juicy story she writes. Their sexual encounter is on-and-off but by the end of the season one it seems to be on a story feeding platform when Zoe finally gives in to a man closer to her age, ex-coworker at the Herald which he now, and inadvertently is aiding Zoe’s journalistic pursuit of the abuse of power by Frank.

This series is a puppet show with Frank holding most of the strings. You will absolutely love the creative nature of the drama that has fewer winners than sore losers.

What seems to be fair play always ends with cards well played against some unsuspecting fool.