Before I downloaded My Beloved World, I briefly researched Supreme Court Justice Sonia Sotomayor’s background since I was not familiar with the details of her life that I was to see were so carefully crafted in her memoir. Yet somehow I knew she was a woman of cultura  and humble beginnings.  I understood the look in her l that told a thousand sad stories that culminated in hope and greatness.

My Beloved World at first captivates and draws the reader a picture of an awkward young girl trying to find her relevance in a very difficult world. Diagnosed with juvenile diabetes at seven years of age, she describes how confused she felt and how the diagnosis was viewed as a death threat. She describes how hard her family took news of this little girl having such a terrible disease.  At such a young age, she chose to inject herself with insulin to prevent her parents fighting over who would administer it. In those times there were none of today’s glucose monitors and high-tech gadgets; Sotomayor had to boil her syringes though she could barely reach the stove burner. After her diagnosis, she solely depended on her abilities to read her inner being and to recognize the sensations of her body that communicated to her when something was wrong.  She attributed her self-discipline and autonomy to living with diabetes, saying in one instance, “The disease also inspired in me a kind or precocious self-reliance that is not uncommon in children who feel adults around them to be unreliable.” In another area she expands upon these kinds of personal effects of hardship:

“Difficulties can tap unsuspected strengths.  It doesn’t always, of course: I’ve seen life beat people down until they can’t get up. But I have never had to face anything that could overwhelm the native optimism and stubborn perseverance I was blessed with.” (emphasis added)

What I found astounding in her book was the relevance of her upbringing to my own and that of my fellow Puerto Ricans — the way she describes our culture, the segregation of neighborhoods, the topics of conversations around the dinner table, the dysfunction, the santería, marital struggles of family members, dating, all the way to cashing in paychecks at the currency exchange.The melancholy of the adults in her family from leaving their homeland Puerto Rico to move to the States holds true,even today!

One description I particularly enjoyed was that of Saturday evenings at her abuela’s house.  There, her family all gathered religiously to have dinner, watch a game, sing songs, recite poetry . And when the party would clear out and only a few intimate members remained, they would turn down the lights, ignite a candle and evoke the spirits.

In her descriptions, you learn about Sonia’s experiences, as well as about her as an individual. Even as a child Sotomayor was very compassionate and quick witted. This later was actualized in a highly intellectual woman with outstanding academic achievements and professional accomplishments. By reading this book you realize she worked really hard to reached her goals while being innovative and inspired along the way. Her love for books began when she was a kid reading Nancy Drew character books and watching countless episodes of the legal drama Perry Mason.  In one interview she said, that she knew she wanted to be a judge when she watched this show because she could tell, even as a kid, that the judge was the most important person in the room.

As a kid Sonia took on job at United Bargains, and one of her roles was to spot shoplifters. When she did, she would simply asked the thief to return the item without raising her voice or making a scene, confirming her humility when she reflected:“To pity someone else feels no better.  When someone’s dignity shatters in front of you, it leaves a hole that any feeling heart naturally wants to fill, if only with its own sadness.”

What stuck out to me the most in My Beloved World was the relationship between Sotomayor and her mother.  You know by reading this book that her mother cared deeply for Sonia and her brother, though, due to her own extraordinary circumstances, she was incapable of giving to her children what she herself had not received in childhood.

“…when my mother got home from work later and there was no milk for her coffee, all hell broke loose.  Papi was the one who had spilled the milk, but I was the one who felt guilt.”

“It just wasn’t in my mother’s nature at that time to show affection, give you a hug, or get down on the floor to engage with a kid.  She had been deprived of the formative security that nurtures such impulses.  Besides, they would have mussed up her outfits.” (emphasis added)

Sonia Sotomayor’s memoir describes a Puerto Rican woman who at first, lived in the reality of her boundaries. For instance, in the retelling of a time in college wherein a young girl speaks of a wedding invitation and that her parents would not be attending but instead send a gift from the wedding registry; Sonia recalls thinking to herself, “What the heck is a wedding registry?”  Reflecting on this and other similar moments, she notes,“’The challenges I have faced — among them material poverty, chronic illness, and being raised by a single mother — are not uncommon, but neither have they kept me from uncommon achievements.” Later she muses that “People who live in difficult circumstances need to know that happy endings are possible.”

Hers is not a rosy tale of success. Sonia walks the reader through a journey not common among the elite, powerful members of society today. Comay Sonia experienced her fair share of racism and discrimination.  She also suffered a great deal of emotional pain due to her father’s alcoholism and death, which also greatly saddened her paternal grandmother whom Sonia adored. Sotomayor’s mother, “que hizo de tripas corazones” (who accomplished the impossible) maintaining a home and private education for her two kids.  Her mother also, during economically difficult times deciding to go back to school because she knew that without the support of her then deceased husband, and spousal benefits about to end,  the needs of her children would not go unmet. She too needed to better herself to better provide for her children. The family as a whole dealt with obstacles and challenges that are still alive today in far too many homes.

I find her book an inspirational guide, both as a single Puerto Rican woman and a single mother. Lead your children by example! 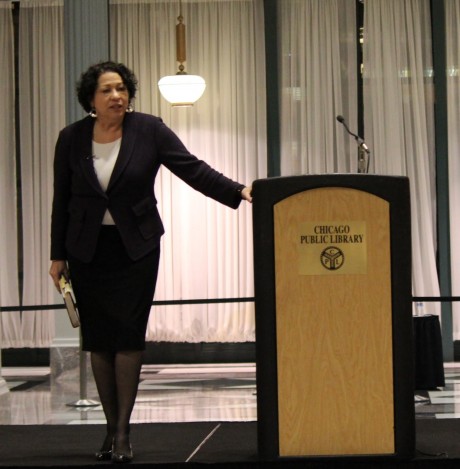 As her memoir continues all the way to her induction into the United States Supreme Court you find yourself very engaged in her thought process and views as well as her experiences as a Princeton alumnus and in her marriage, divorce, and professional career. Together it all tells a compelling story that will not let you down.

As she very modestly said in a tv interview, “I wrote this book because I wanted to hold on to the real Sonia”  We certainly will hold on to her too!

To speak about her book and her life, Sonia Sotomayor was present at the Harold Washington Library, at the end of January of this year. I got a chance to see her up close and personal, photograph her, and intimidate the U.S. Marshals who would later ask me to remove myself from the patch of floor I was sitting on directly in front of her. I was done snapping pictures, but I had become paralyzed hanging onto her every word.  It was a little embarrassing, but the walk of shame was worth every step!

After her speech and her response to pre-approved questions by members of the audience, I squeezed my way into the book-signing line and we exchanged a few words:

MR:    “Your honor, I am from Humboldt Park which is the equivalent of of the South Bronx, and I want you to know that all Latinos alike are very proud of you and what you have accomplished.  Thank you for what you’ve done.”

Earlier in the day, Her Honor was also present at a private event held for the Puerto Rican Bar Association,  or which she donated signed copies of her books. She was extremely gracious with her time and patience by attending both events. A tale that took place at this event was too good not to share…

…You see my ex-mother in law was in attendance for the Puerto Rican Bar Association event and she too was overwhelmed with emotion of having the opportunity to meet and greet the Justice.  As she got closer and closer to Her Honor, her heart pounding profusely, she took out a ziploc bag and handed it to the Judge.  What was in the bag, you wonder?

It was a copy of the November 2009 issue of Latina magazine with Justice Sotomayor on the cover .You see, my dear ex-mother in law had this magazine carefully stowed away in hopes of one day having the chance to get it signed.   She could not have anticipated Her Honor’s response:

The judge re-bagged the magazine and slid it back to my ex-mother in law.Let’s just say that my ex-mother in law’s walk of shame had a longer home stretch than mine…
Moral of the story: It doesn’t matter how famous, prestigious and powerful a woman becomes: DON’T MESS WITH THE HAIR! You can count on Latina magazine not being on the Justice’s coffee table! 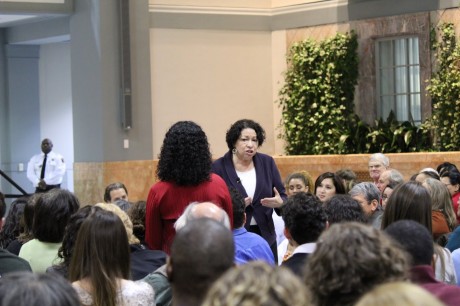