My wife and I sat at a table on a Sunday afternoon awaiting round one, the appetizers. The restaurant is one of our new favorites, El Capitán, a Honduran restaurant serving dishes that’ll haunt your dreams for weeks. The other tables were empty, but we hardly noticed as we sat there barely talking to each other like two dope fiends anxiously awaiting the next hit. 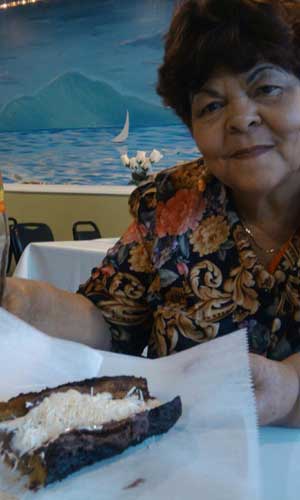 The place is within walking distance from my grandma’s Humboldt Park home. And seeing as it’s on the route I usually take to get to her house, I was surprised to discover it’d been there all along. I must’ve passed it dozens of times. I only noticed it after my trip to the motherland back in the summer of 2011. I saw the blue-and-white curtains before spotting the diminutive Honduran flag hanging above the windows. Everything about it screamed, “Come in! Eat something.”

That Sunday my wife inhaled her heaven-inspired licuado de maracuyá (passion fruit smoothie) while I sipped on a café con leche — which are either too small or too devastatingly delicious. I dare anyone to stop at just one cup. Either drink will set you onto the right path, depending on how rough the previous night was and what your caffeine needs are. My wife’s the kind of person who can happily sip something other than dark roast, steamed milk and sugar. Not me. I need coffee by IV drip.

From an open kitchen came the cook carrying our appetizers — platano maduro con frijoles fritos, mantequilla y queso (sautéed plantains with refried beans, buttery sour cream and cheese). It’s served in a way I’ve never seen anywhere else, the platano kept intact except for the split down the middle holding the ooey-gooey depravity.

Now, a word about Honduran mantequilla. If you’re of Mexican descent — which most Latino Americans are — then you likely know mantequilla to be butter. Not so with us catrachos. In Honduran circles, mantequilla is that buttery sour cream or sour-creamy butter we spoon onto our plantanos or next to our frijoles fritos. (I don’t even think Hondurans have a word for “butter,” as we never use it or eat it, though I might’ve heard my Grams call it “manteca” once.) Anyway, all you need to know about Honduran mantequilla is that it’s not like butter or like sour cream but a little of both.

The second appetizer was dried banana chips. These are much like their cousins, tostones, except they’re sweet instead of salty and not so greasy.

I know what you’re thinking: two banana-based appetizers? Well, despite its more popular connotation, Honduras is proud to be the banana republic.

My tongue sought out the last drop of café con leche as the last of the banana chips were gobbled up. I decided to switch things up ahead of the main course and ordered a Tropical, the popular fruit soda in Honduras. (Guess which fruit it’s made from. Go on, guess.) Readers familiar with Jupiña, a stable at any Antillean eatery, might draw a few hapless comparisons, but Tropical is lighter on the tongue and comes in a badass glass bottle (always a plus).

The post-appetizer wait is the most sour aspect of the entire dinner, especially if you’re with four or more people at midday, as I’ve been on more than one occasion. Most of my visits have been before 5 p.m. when there’s only one or two hands on deck, and since nothing is prepared in advance, the time between appetizers and the main course can stretch as long as half an hour. That’s why I recommend having a flexible schedule on the day of your visit, and make sure you and your companions have something to talk about while you wait.

The proprietor, a short stout woman from Honduras’ Caribbean coast who regularly asked if we were enjoying everything, helped bring the dishes to the table. My wife got the desayuno hondureño típico, El Capitán’s signature dish. (Hondurans revere breakfast, and you’ll never go wrong ordering anything labeled “tipico” at a Central American restaurant.) The meal comes with shareable portions of succulent steak cooked to order, eggs, velvety pinto beans with a hunk of queso fresco, more platano maduro (smaller and diced this time), mantequilla and fresh avocado. All of this is served with small warm tortillas, either corn or flour (but what maniac chooses flour?). The steak is the star here, with the beans and platano maduro tying for a close second place. After only one or two bites, you forget all about how long you had to wait.

As for me, I chose Honduras’ national dish, the baleada. Resembling giant calzones made of flour tortilla (the except to the rule), baleadas are stuffed with everything the desayuno típico has, minus the steak (that is, unless you’re feeling dangerous). The first and only other time I’ve encountered a baleada was in Tela, a coastal town on the Bay of Honduras. It’s a proletarian breakfast, a to-go meal suited for hardworking people who are equal parts hungry and busy.

Another downside about El Capitán is the lack of a dessert menu, but if you can survive the first two courses and still have room in your stomach for flan or tres leches cake, then I guess you’re just a better person than I am. Once I’ve abandoned the idea of finishing my monstrous plate, I like to end with a typical Honduran dessert — one more café con leche.

In all, if you’re looking to sample some delectable Central American fare, El Capitán certainly won’t disappoint. The food is dirt-cheap (about $8 a plate) but cooked with a lot of care and attention. The restaurant’s perfect for a late brunch after a long night, and I hear they even serve a mean sopa de cangrejo (crab soup), another Honduran speciality. There’s a full bar and live music on Friday and Saturday nights. They don’t accept credit cards, but they do have an ATM.

Be sure to bring your appetite.