To be completely honest, I had never heard of The History of Apple Pie until a couple of weeks ago, when Gozamos’ music editor Ilene Palacios pointed out their debut LP Out of View to me. 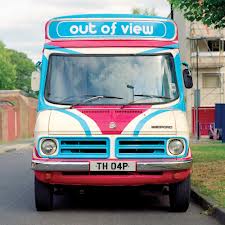 The first thing I thought was “damn, that’s a silly name.” Indeed it is. But, surfing under the great fashion of extravagant, often dull and off-putting, yet inviting contemporary indie rock band names such as …And You Will Know Us by the Trail of Dead or The Pains of Being Pure at Heart, it would be unfair to dismiss THOAP’s efforts simply based on how they’re called — the typical “don’t judge a book by its cover” conflict. When a band’s press release claims they have Sonic Youth and My Bloody Valentine influences, you can be sure you’re in for something potentially exciting — even if at first glance they don’t seem that intriguing.

Their sound was led by tremendously cool and almost palpable harmony between the musicians (yeah, that romantic relationship between guitarist Jerome Watson and Min can be perceived in their concordant songwriting capabilities). While allusions to late 80s-early-90s noise rock and shoegaze pioneers are the primary influences to its aesthetic, the real core of The History of Apple Pie’s debut album is Stephanie Min’s melodious (though at times over-sweetened), honeyed, twee-injected vocals. They rely on an alluring playfulness, which, if you’re a sucker for pop, won’t be hard to fall for.

For their part, the band establishes itself in the vein of other noteworthy, growing London acts, like rebellious youngsters Splashh or lo-fi popper Gross Magic. Comprised of ten sticky songs, Out of View should allot THOAP the acquirement of transcontinental conquers along with some likely radio play. This shouldn’t come as a difficult task, considering their three previous 7” singles released sold out. Tracks like the dreamy “See You”, jangle-poppy “Glitch” or the staggeringly hard-hitting smasher “Do It Wrong”, are strong contenders to be college hits. Min’s adolescent, not so meaningful lyrics that reveal ties between nostalgia and naiveté should easily click with scruffy, disheveled rockers spending too much time in their bedrooms.

While not precisely reaching a memorable status, Out of View is a pretty solid full-length piece. Its charm is divulged upon first listen, exuding glossy, pink color, together with yummy, sugared torrents nuanced by a deliciously savory teenage flavor.

Out of View was released on Marshall Teller Records on January 29th. Watch the music video for the latest single “See You” (dir. Camille Bennett).