La revista contratiempo is getting ready to celebrate its 100th issue with a big pachanga on December 5th and you don’t want to miss out.

The music is going to be amazing, both at the Celebration Fundraiser and at the later Dance Party. You’ll get to see members of Sones de Mexico perform as well as be treated to the Afrolatin sounds of Victor Garcia and Papo Santiago. David Chavez from SoundCultureChicago will be there as well as Charly Garcia of ((SONORAMA)) and Omar Torres from AGUZATE.

You can even pick up an original art piece by some incredible artists like Chema Skandal!, Diana Solis, and our very own Eric J. Garcia.

But most importantly,  you’ll be able to support an organization that has been carving the artistic landscape in Chicago for Spanish speakers for nearly a decade now. Since 2003, contratiempo has been providing an outlet for Latin American writers and visual artists to share their work in Chicago and beyond.

The mission of contratiempo is to both increase the importance of Spanish as a language in the United States from a literary perspective, as well as to acquaint readers with Spanish language fiction, poetry, criticism, and commentary by Latin American authors from Chicago and the United States.

Gerardo Cardenas, editorial director of contratiempo said that the magazine eventually grew from a small band of writers, intellectuals and professors from Latin America that found themselves in Chicago. They came together at first to read Latin American authors whose works were then difficult to find. Eventually they began to share their own creative works and the first workshops were born. The next natural step, Cardenas said, was to look for a way to publish those works.

Contratiempo has helped writers like Miguel Méndez find their way. “When I came here, I had a very little notion of what literature was,” he said. “I wrote but I didn’t write nearly as much.” Workshopping his pieces with the community of writers that contratiempo established has helped Mendez hone his abilities and he recently published a piece with the magazine.

Cardenas said that over time he has seen the Latino literary community grow in Chicago and that he feels contratiempo has been a contributing factor to this boon.

The ways in which contratiempo supports Hispanic arts and culture are seemingly endless. The magazine regularly selects local Hispanic artists whose work is currently on exhibition for their “mirada complice” section. It also has its own press which publishes books of short stories and poetry.

contratiempo also has a myriad of events that help foster community among Spanish speaking writers in Chicago and abroad. contratiempo holds Poesia en Abril, which is the only Spanish poetry festival in the Midwest. This year the magazine also participated in  readings on September 1st, which took place in 175 countries worldwide to show solidarity with the suffering in Juarez.

Cardenas said that reaching the 100th issue feels like a tremendous achievement, but also like a tremendous responsibility. You have to celebrate and reflect on how you got there, but you also have to look at “what lies ahead and how you’re going to get to the next 100,” he said.

And there are some exciting projects on the horizon for contratiempo magazine. It was recently awarded a grant from the MacArthur Foundation to embark on an exciting cultural exchange with Humanize, a bilingual publication in Spain. Executive Director Moira Pujols said that there would be a content exchange with Humanize, but the partnership will also create an exchange in skills. Humanize will learn from contratiemo how to create a community around a cultural project and contratiempo will learn from Humanize how to distribute content digitally through mobile apps.

There will also be a symposium in June 2013 that explores “the themes of Spanish speaking authors who are outside of their home countries and how that experience changes their work and the creation of a Spanish speaking cultural community around it.”

Although people often ask her why contratiempo doesn’t just go mainstream and publish in English or at least bilingually, Pujols said that publishing in Spanish makes perfect sense. She said that showing the cultural contribution and impact that the immigrant Spanish speaking population can achieve in Chicago, has given the publication deeper roots.

“Why wait until immigrants become fluent in English to show that they are artists and that they can write?” said Pujols. “There is enough of a poulation that wants that cultural product, that doesn’t have it available to them and that’s why we keep the magazine free. It’s to bring this cultural product to the community in a way that we don’t have any obstacles, including physical access, language, and price.”

The only way in which being a Spanish publication has been a limitation is in terms of finding funding. Pujols said that being written in Spanish means that contratiempo is perceived as being targeted to a very small niche population and so it can be more difficult to get financial support. This makes grants like the one it received from the MacArthur foundation and its fundraising events all the more important.

You can show support for contratiempo’s cultural project and celebrate their 100th issue by buying a ticket to the main fundraising event. For $100 dollars, you automatically become a sponsor of the magazine at $1 per issue. For $20 you can show contratiempo some love and dance the night away at their after fundraiser dance party. Purchase tickets at contratiempo.net. 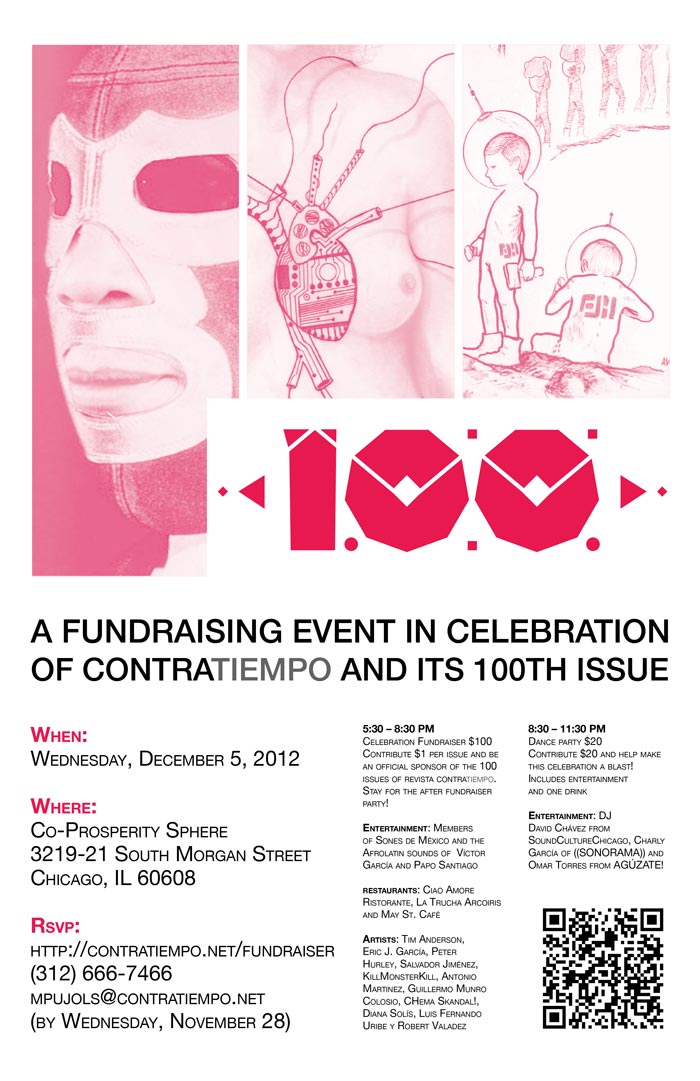