Lazy. Ungrateful. Primitive. Dependent. Loud. Pathological. These were the descriptors of Puerto Ricans in the U.S. media following the island’s November 6 non-binding referendum on its political status. Not only do such comments dehumanize millions of people but also says a lot about this society’s unwillingness to acknowledge its own racism and imperial policies. Essentially, the United States government is the root of the Puerto Rico quagmire regardless how one feels about the Boricua people. We must not lose sight of this.

In 1898, the U.S. marines invaded the island and took it as war booty from Spain in the Treaty of Paris. There was no Puerto Rican representative at the treaty discussions or any vote by island residents. With the 1922 Supreme Court case Balzac v. Porto Rico, the island’s subservience to the U.S. Congress was solidified: Puerto Rico “belong[s] to but [is] not a part of” the United States. Although proponents of the “Commonwealth” status claim that the island is in a mutually binding pact of association, its 1952 constitution does not have the legal authority to override any Supreme Court decision. Puerto Rico thus continues to be property of the U.S. Congress, subject to all its laws and desires. There is no voting representatation in Congress nor can Puerto Ricans who live on the island vote in the U.S. presidential election. In other words, 3.7 million human beings are colonial subjects existing under a tyrannical system. The “Commonwealth” status is a farce, and with it is the notion of a free and democratic United States.

It must be said that on November 6, the majority of registered voters actually did not vote for statehood. According to the Puerto Rico State Election Commission, nearly 500,000 people or 26.3% of the ballots cast, opted not to vote for a status option. There are many reasons for this, including divisive partisan politics and the wording of the question. For me, the most important reason could be that the referendum was non-binding. The U.S. Congress has actually never officially sanctioned a referendum despite numerous attempts to in the House. This means that it could reject any non-binding majority vote, whether it is for statehood or independence. All the ballot questions – in 1967, 1993, and 1998 – regarding Puerto Rico’s political status were actually sponsored and funded by the island’s government. As you can see, in the last 114 years the U.S. government is the real power on the island and therefore the source of its problems and possible solutions.

Thus, the real debate is not whether Puerto Ricans voted for statehood and whether the United States is going to “allow” that to happen. Instead, we must beg the question: What is the responsibility of the United States in living up to its rhetoric of democracy? This is not to say that the U.S. government must address the problems it created with religious paternalism, like it does when it brings “democracy” to places like Iraq and Afghanistan. Democratic processes are about having people engaged in determining their futures, through discussion, debate, and consensus. Puerto Rico was never offered this. Puerto Ricans have never been seen as full human beings in need of true self-determination. Therefore, in order for the United States to strive for a democratic potential, it must recognize its imperial stains and be a sincere and dedicated companion to reconciliation. How will this be done? Only time and a consolidated effort by Puerto Rican communities across the U.S. will tell.

See the complete results of the referendum. 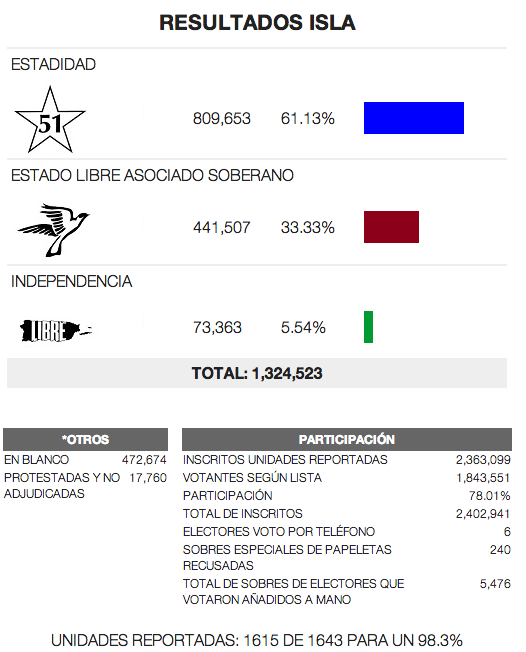