It was a brisk Friday night; finally, jacket weather. A perfect evening for an Oktoberfest, a display of Chicago, regional and national craft beers (and a couple of seasonally-appropriate ciders).

My approach to the Bridgeport Art Center’s outdoor atrium was as slow as I dared, for I needed as much time as I could muster to admire the sculptures out in front of the fantastic old building, the cold autumn air carrying the delectably smoky smells of food trucks and stands, especially from Flesh For Food’s pig roast. My omnivorous instincts kicked in: I was ready for some fermented plants (i.e. beer) and maybe some hot meats. Upon walking in, guests grabbed a copy of the second issue of Mash Tun: A Craft Beer Journal, a beer map and a glass of their choosing. 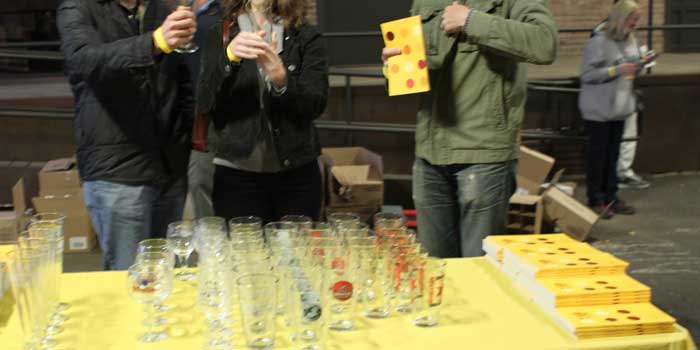 I opted for the large Duvel tulip glass since the beer list seemed to have a variety of ales on it. I thought that since I had a cold that night, it might be all better to smell with, my dear. So, without any further ado, here are my five favorite beers of the night and a chronicle of my first pig roast. 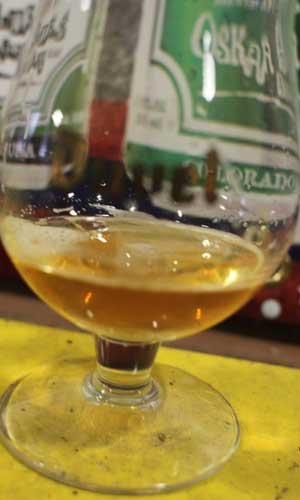 The Little Sumpin’ Wild Ale was Lagunitas’ seasonal ale for July but felt right at home amongst the more cold weather beers. It is deep gold in color with a decent clarity and white head. At first glance, it could be mistaken for a hefeweizen or a Belgian IPA’s distant, Americanized cousin. The primary flavor in this Belgian Strong Ale is of malted wheat, but refreshing hints of citrus and what seemed like fruity bubblegum come on strong upon the first sip and even more strongly in the beer’s aroma. It has the initial hoppiness of an IPA but with a cleaner finish. Even so, it does have a lingering bitterness making it difficult to gulp down, especially with food. Overall, the Little Sumpin’ is balanced and had a…je ne sais quoi…a little something for everyone.

Half Acre Double Daisy Cutter Pale Ale | Chicago, IL | 8% Abv
This local brew has twice the hops and twice the kick as its predecessor, The Original Daisy Cutter. It offers a pretty gradient of medium clear, light orange-to-copper color, and the most prevalent flavors it offered were citrus, pineapple and florals (daisy, I would imagine). It also has a mild bitterness in the aftertaste. Since it’s a double IPA, the Double Daisy is rather strong, but you won’t notice it too much, even if you find the apparent taste of alcohol in beer off-putting (however, this prediction might not hold true if you’re knocking back more than a taste portion of it).

Stone Smoked Porter with Vanilla Bean | Escondido, CA | 5.9% Abv
This ultra dark porter was one of the few beers not being served on tap, but it was still yummy since it was poured well and got a chance to air out. It has a strong, enticing aroma of coffee and vanilla. The actual vanilla bean flavor arrives in the early aftertaste, giving the overall taste a milk chocolatey quality that manages to not undermine the smokiness of the brew. This smooth beer does have a surprisingly deep kick towards the end, too, so be ye warned. And if the vanilla is too dessert-y and, well, vanilla for you, there is also a chipotle version that may suit your fancy.

This beer hails from the late 1980s, and it claims to be a founding father of the Chicago craft brew world who plays by old school rules. This local bohemian pils had the best clarity and color of any beer at the festival and a soft, white, creamy head to boot. Just look at it; it’s friggin’ beautiful. The Baderbraü’s crystal clear, amber body conjures an insatiable thirst to even me, a known pilsner rebuffer. And though I admit I judged this book by its cover, its traditional malty and earthy flavors do not disappoint. It was refreshing almost to suggest a lemon taste, but was a rather bitter and dry brew to fit in with the pilsener cool kids crew. 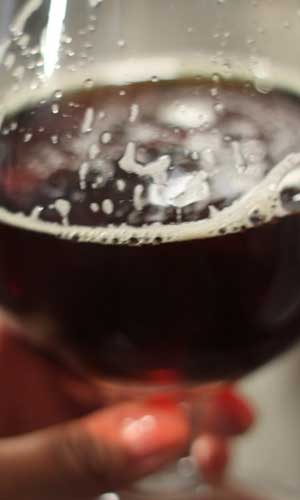 It was at Revolution Brewing’s table that I first got offered a full pour of beer. So, brownie points to the brown ale for that (Yup. That was an intended pun). It’s pretty hoppy for a brown ale but has hints of toffee flavor and color that help it go down smooth and cold as silk. It was born for dangerously easy drinking and to accompany food.

This smooth brew, which is available on tap at Revolution’s Brewpub in Logan Square, was the perfect companion  to my cut of the delicious pig roast by Flesh for Food. The meat was perfectly smoky and even the fattiest parts were cooked so they weren’t too greasy. Each cut had its own distinct taste and texture. 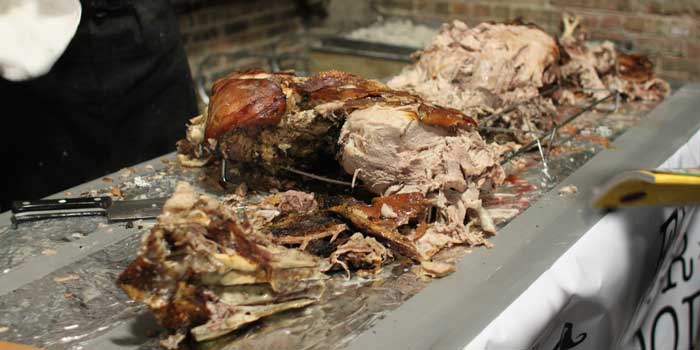 My plate included a variety of cuts, including what Mexican-side can only be described as a greasier, more savory “carnitas” and a slice of “chicarrón”(rind? skin?). Since I made the choice of asking the server to give me “the works,” I ended up with none other than the pig’s left eye. Just looking at it looking at me grossed me out while also filling me with a sense of hypocrisy and duty. I just had to eat it, right? I eat other meat, and I couldn’t back out of this; a pig only has two eyes, and I got one of them! And wasn’t it in My Big Fat Greek Wedding that I heard the eye is supposed to make me smarter? With indignant cowardice, I plopped the eye into a slice of bread and prepared a pickle chaser and brown ale mouthwash… 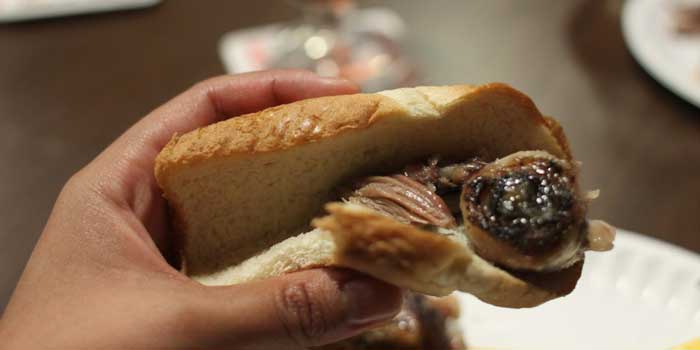 And you know what? The eye wasn’t the…worst thing I’ve ever eaten. Well, it wasn’t much worse than chicken feet or blood sausage, anyway. It had a super chewy texture, somewhere between straight up fat and tripe and had no real distinguishing flavors besides perhaps…ugh…vitreous. It was a singular experience for me; that’s for sure. I’d share the weird details of my strange connection to this animal that resulted from my eating his mushy organ, but the existential realizations about my relationships to animals-as-meat could be the topic of another several articles. As of now, I consider this something to cross off my bucket list.

After the room of people went on blissfully unaware of the slight trauma I underwent at the dinner table, I continued my beer rounds, played with a cute dog and participated in a toast following a reenactment of a Prohibition-era speech about temperance and the evils of boozing. 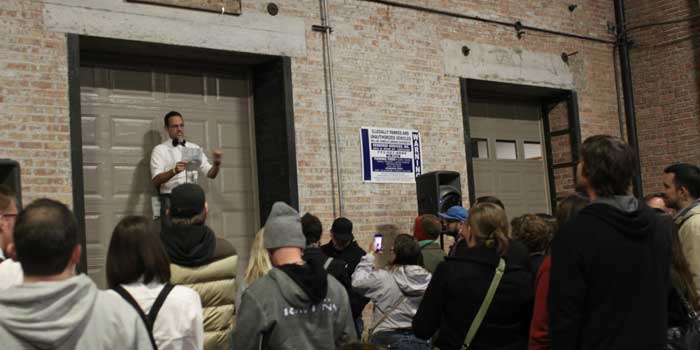 All in all, it was a good fall night for fun and trying new things, and I hope you get your hands on some of these delicious beers to try for yourself.