This Is How You Lose Her is Junot Díaz at his finest.  Díaz’s newly released collection of short stories comes five years after the publication of his Pulitzer Prize-winning novel, The Brief Wondrous Life of Oscar Wao.

Yunior, the skirt-chasing Dominican-American narrator who appears in The Brief Wondrous Life and Díaz’s 1997 book Drown is back for This Is How You Lose Her. The stories focus on love and heartbreak, as the title suggests, but also on what it means to be an immigrant in the U.S., have immigrant parents, and grow up in a poor, minority neighborhood.

Although Díaz occasionally narrates from the perspective of other characters, the stories told by Yunior are the most powerful, especially “The Sun, the Moon, the Stars,” “The Pura Principle,” and “The Cheater’s Guide to Love.” Yunior is a complex character: he is a relentless womanizer, but he’s also the sci-fi nerd who falls hard for his girlfriends and regrets his dalliances for years afterward. Although sometimes we get frustrated at him for making the same stupid mistakes, he inevitably wins us over with his wit, honesty, and all-too-human fallibility. 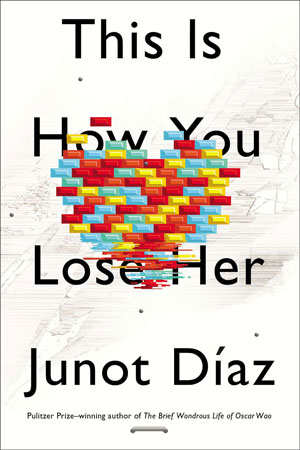 Díaz’s strength is also his ability to establish intimacy with the reader – especially the Latino, immigrant, or Spanish-speaking reader – through language and cultural references. Díaz’s own experience as a Dominican-American, born on the island but raised in New Jersey, greatly informs his writing. In a recent interview with Barnes and Noble Review, Díaz said: “I grew up in a Dominican community that was totally erased, totally ignored by the mainstream. I grew up never seeing myself or my neighbors or my friends in any kind of literature. I grew up with no books or movies or TV shows that reflected my world, my identities, my struggles…If I had to parse my first motivations for becoming a writer down to one it would have to be my profound desire to battle that fucked-up erasure (which is really a violence) by singing my community out of that silence.”

Indeed, Díaz does sing his community out of the silence through his characters and formal techniques. He seamlessly weaves Spanish words throughout the stories, thus pointedly bringing the hybrid language of American barrios, so often denigrated by English and Spanish speakers alike, into the realm of popular literature. Spanish also appears without italics, effectively negating its foreign-ness.  (Sentences like this are common: “Find yourself another girl, Elvis advises…Clavo saca clavo. Nothing sacas nothing, you reply. No one will ever be like her.”)  He also establishes the importance of his Latino readership by speaking directly to them, often in a confiding tone. (About a fancy resort in the Dominican Republic, he writes: “Let’s just say my abuelo has never been here, and neither has yours.”)

Although This Is How You Lose Her concentrates on romantic love and loss, some of the most poignant stories explore familial bonds and friendship. In “Nilda” and “The Pura Principle,” Yunior’s brother Rafa is terminally ill, yet in his frail state, he repeatedly rejects Yunior and his mother’s attempts to care for him. It’s an unusual depiction of a family’s struggle with sickness and death, striking for its portrayal of the failure of human connection to mitigate grief and suffering.

On a lighter note, friends play a significant and often comic role throughout This Is How You Lose Her.  They are like a modern-day Greek chorus, weighing in forcefully and dramatically on the side of Yunior (“my boys”) and his girlfriend (“her girls”) whenever the relationship starts to fall apart. In “The Sun, the Moon, the Stars,” Yunior’s girlfriend considers whether to take him up on a free trip to the Dominican Republic, or drop him for being unfaithful: “Her girls, the sorest losers on the planet, advised her to take the trip and then never speak to me again.”  Friends are also important for more minor characters, and Díaz’s descriptions of them are very funny. Yunior’s mother has a group of God-fearing confidants whom he calls the “Hallelujah Crew,” and his half-black girlfriend’s pals are the “Biracial Identity Crisis Support Group.”

“The Cheater’s Guide to Love,” a coming-of-age-of-the-artist story, is the perfect conclusion to This Is How You Lose Her. Yunior’s cheating costs him the love of his life, whom he refers to as “my ex.” As a coping mechanism, he becomes an obsessive exerciser, but he keeps getting injured; he tries to date other girls, but he is repeatedly spurned. He has moved from New York to white, homogenous Boston, where he is frequently the target of racism. Weakened physically, emotionally, and spiritually, and unable to get over the ex despite the passing of time, he finally turns to writing to give him a fresh star – in love and in life. Yunior is brutally honest in this story – he finally accepts that “the half-life of love is forever” – but also optimistic. We, the readers, finish the book feeling hopeful that like Yunior, we can also recover from our own errors and life’s unexpected challenges, and write a new chapter for ourselves.

One thought on “Book Review: This Is How You Lose Her”