Gozamos.tv will be live streaming the shows and doing video interviews at Villapalooza 2012. On Saturday, September 22, 2012 from 1pm-10pm »

Walking up 26th street, the obvious liveliness of the neighborhood is apparent with families, friends, couples and all sorts of street vendors, everything from eloteros to people selling memorabilia for the Mexican Independence Day Parade, flooding the sidewalks. Turning the corner on Avers, a few members of the Villapalooza team were preparing a wall using black rolling paint to advertise the date of the festival.

“Its going to be the logo in the middle and just some basic text font on the sides,” says Hector Lopez, a Villapalooza volunteer.

Villapalooza, taking place Saturday September 22, is a music festival founded in 2011 by community group Surcul in the Little Village Neighborhood of Chicago. It is a chance to bring music to the neighborhood that otherwise would not have the opportunity or platform to perform. It is a way for the community to come together in a positive way.

“There are no bars here or spaces where people can go and enjoy music,” says Hector Herrera Yepez, Villapalooza founder.

The show features local, underground bands from Chicago and some from out of state. Many genres of music will be spread out amongst three stages, such as punk, ska, hip hop, durangense, jaracho and banda. The locations of the stages are in the parking lots of Morenos Liquor store and a school, Rosario Castellanos. The third stage is located at Jacaranda Bar. This year more bands from Little Village have been invited to play, giving them the ideal exposure the festival is all about.

“Last year we did vacant buildings and transformed them for that day,” says Yepez.

“I’m 24 years old, I was born and raised here in Little Village; I wish I had something like this when I was a kid,” says Alexander Velazquez, a 2nd year volunteer.

Velazquez assists in acquiring Hip Hop artists for the line up and also design of the Hip Hop stage. For him it was more than just doing his part, it was about “keeping the standard” as he put it.

Some of the Hip Hop artists featured this year will be Emcee Scheme of The Molemen and a local emcee from Pilsen by the name of Mateo.

“It seems like this cat, [Mateo], really gets the street element of Hip Hop,” says Velazquez. “I want to expose the kids of Little Village to what I call the nitty gritty. It’s a little bit different from what they hear on the radio.”

Another new addition to the festival will be a small gallery at Prosper Skate Shop, who are having their grand opening that day. The shop is located on 26th and Central Park.  The artwork being presented ranges from sculptures to paintings, but it is something you have to go see. Although the gallery takes place in a non-traditional setting the layout remains dressed to impress. Entrance to the gallery is free.

The festival has gained the financial support from local businesses and private donors. Although Villapalooza itself takes place once a year, Surcul aims to keep the same idea year round. Surcul has hosted fundraising efforts, like a skate competition at Petrosky Park and a comedy show at Jacarandas Bar.

Despite the festival being for the people of the neighborhood, everyone is invited and encouraged to come enjoy the music and visit a part of the city you may not have been to. The area offers more than the typical stereotypes of ethnic music and gangbangers, which every neighborhood in Chicago has. There is a real sense of community present.

“People sort of get a bad rap being from 26th Street a.k.a. Little Village,” says Lopez. “People look at you and say, ‘why aren’t you a gangbanger?’ You’re judging a person based on where they live.”

The younger generation has expressed their appreciation to those responsible for bringing the festival to the area. They enjoy the music and the fact that the majority of the bands are still obscure, letting them hear something other than what mainstream media will provide. The older generation has also expressed their appreciation for cumbia music and allowing them to participate in the festivities.

“It wasn’t about making money,” says Maria Camacho, manager of the Pilsen based band Malafacha, about why they wanted to play Villapalooza in the first place. “They chose to play the event in order to gain new followers.” 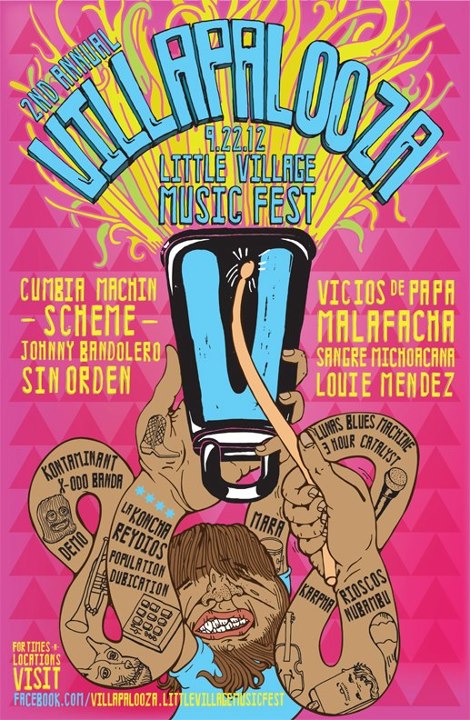 In addition to the wonderful bands that will be playing, there will be food for sale from local vendors and crafts for sale by local artisans at 26th and Central Park.